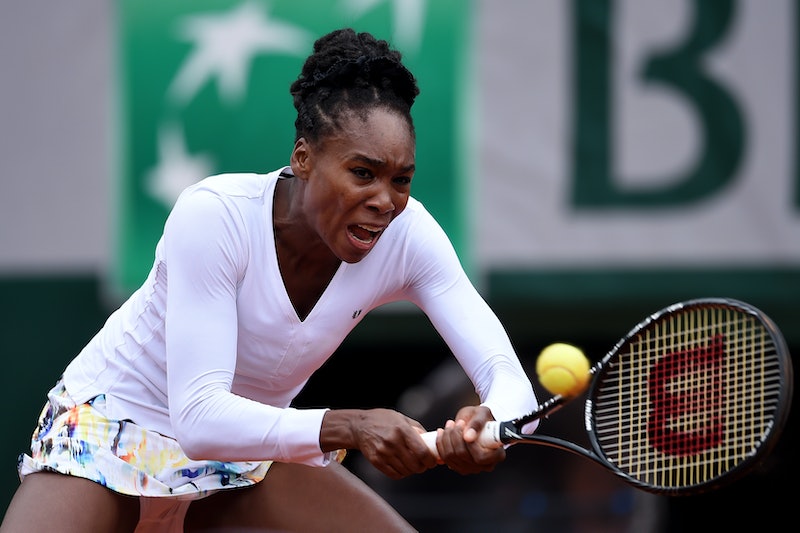 What does it take to be "ladylike" in tennis? For many of the world's top female tennis players, it's to remain silent. In recent years, tennis associations launched campaigns to ban grunting among female players, inevitably causing an outcry among both pro- and anti-grunters. This month, "female tennis player grunting" at the 2014 Wimbledon Championship is sure to again attract attention from the sidelines as the likes of Maria Sharapova and Serena Williams take to the court.

Why — and how — did grunting become one of the biggest attractions of women's tennis? It could be because the conversation around grunting in tennis has remained incredibly gendered: While male tennis players can grunt to their hearts' content, female tennis players have been criticized for their decibel-defying shrieks and groans. Yes, the term "ladylike" often gets thrown around during the debate; women tennis players, it seems, are loud and obnoxious when they grunt, while the men are athletic and powerful.

The Attempt To Regulate Grunting

But much of the defense of grunting stems from the fact that only the Women's Tennis Association has made the move to ban the practice from the court. In 2012, the WTA attempted to regulate "excessive grunting" by monitoring the noise level with a nifty grunt-measuring device (seriously). Umpires would be equipped with these handheld devices — nicknamed the "grunt-o-meter" — to decide who's egregiously grunting. The WTA also wanted to set "acceptable" and "unacceptable" noise levels, and teach proper, non-grunting education to future tennis stars.

The WTA reportedly began testing the grunt-measuring devices at various women's tennis tournaments in late 2013, though the grunt-reducing plan is still not quite there yet. "There is more data to be done, there's more assessment to be done on the different audible levels," WTA chief executive Stacey Allaster said last October.

However, the current generation of female players, such as Sharapova and the Williams sisters, won't be affected by these new regulations. But that's not to say they aren't already judged for it. After all, the grunt-o-meter devices were broken out at 2012 Wimbledon Championship, where umpires sought to cut down on what they thought was extra and unnecessary noise.

When Did Grunting Begin?

Tennis wasn't always such a loud sport. In fact, it's hard to say when grunting became a "thing" and, even tougher, who originated it. Some reports speculate that the practice began in the 1950s or '60s. For example, a 1962 Sports Illustrated article on the National Singles Championship in New York mentioned that 17-year-old Vicki Palmer was "indelicately nicknamed The Grunter." Palmer, who's now retired tech support consultant Victoria Heinicke, told Slate in 2011, "The top players grunted occasionally, but I was the only one who did it consistently."

Despite her illustrious nickname, Heinicke said no one was too concerned about her grunting in the '50s and '60s, though it was remarked upon at times. Many people assumed she grunted because her dad taught her how to play tennis, but Heinicke insists she did it because, "it was the way I breathe[d] when I hit the ball."

Flash forward to the 1990s, and grunting was the sole focus of women's tennis, thanks to Monica Seles, the young woman who made it famous — and fashionable. As she was dominating the pro-tennis circuit, many of Seles' competitors complained about her grunts — one even told her to "shut the fuck up" — and Seles was asked to not make her trademark noise when competing in the 1992 Wimbledon Championship. Seles complied, and ended up losing because she couldn't adapt to this new way of breathing.

Today, many female tennis players have adopted Seles' grunt, but the reason why still remains unclear. Breathing and energy exertion are perhaps the two biggest, most scientific theories behind releasing a shriek when you're pummeling a tennis ball across the court at lightening-fast speeds.

Dr. Philip Muskin, a professor of clinical psychiatry at Columbia University, told BuzzFeed that grunting may also help a player's mental focus. "Part of the training in karate is, at the moment of impact, you let out a cry. You’re focusing all your energy into that strike, and it starts at your toes," Muskin said. "Well, tennis starts at your toes, too."

When Grunting Comes Under Fire

But many female tennis players view grunting not as a training exercise, but as a distraction, or even a cheating tactic. Some also admit that men can grunt because their sounds are lower and more guttural, while women tend to have a higher pitch, even though there's currently no scientific evidence to support that claim. "The women are definitely louder and more abrasive," Nine-time Wimbledon champion Martina Navratilova told USA Today in 2012. Billie Jean King, the feminist sports icon, has also criticized grunting on the court.

But since it can't be proven that women just naturally "grunt higher," the push to ban female tennis grunting can't help but be viewed as sexist by feminist and women's sports advocates alike.

Sharapova — who's widely known as the loudest player on the court with shrieks that clock in at nearly 103 decibels — ultimately supports the WTA initiatives, to her competitors' surprise. Sharapova has been accused of cheating before, using her ear-pieicng to "distract" her opponents. But can she tone down her shrieking at the 2014 Wimbledon?

"Certainly not now, not since I've been doing it since I was four years old," Sharapova told The Agence-France Press. "It's definitely tough and impossible to do when you've played this sport for over 20 years."