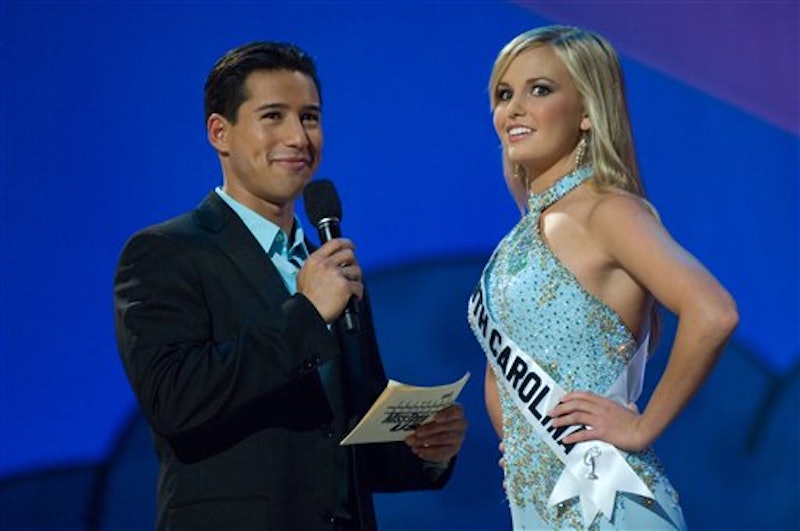 In 2007, the Miss Teen USA pageant catapulted Caitlin Upton into fame, but not exactly for the reasons she'd hoped. Upton, then-18-year-old Miss Teen South Carolina, made herself an instant YouTube sensation when she answered, or rather, failed to answer, an albeit tricky question from actress Aimee Teegarden. When asked, "Recent polls have shown a fifth of Americans can't locate the U.S. on a world map. Why do you think this is?" Upton rambled on for a painful 35 seconds about "the Iraq," "South Africa," and "the Asian countries" and how "some people out there in our nation don't have maps." Specifically, she said:

Possibly coining the phrase "like such as," Upton proved just how difficult pageant life can be, particularly in the stressful final question segment. But now that nearly seven years have passed since Upton gave her fateful final answer, what is the beauty queen up to now?

Remind Me Again: Who Is Caitlin Upton?

It's been a while — high time for a refresher course! The Miss Teen USA competition, the sister competition to Miss USA, has become an annual beauty pageant since its fist occurrence in 1983. It allows young women between the ages of 14 and 19 to vie for the title of Miss Teen USA, and involves the standard Miss USA rounds of competition, including swimsuit, evening gown, and the infamous final question.

In 2007, Miss Teen South Carolina, Caitlin Upton, one of the top five contenders for the crown, was asked for her opinion on the geography crisis. In total, the various YouTube videos showing this answer have received somewhere around 80 million views.

Was That Her Final Answer?

Well, unfortunately for Upton, contestants aren't exactly allowed to revise their responses during the course of the competition. But so decidedly confusing was Upton's answer that she was invited to give the question another try on the Today show with Matt Lauer and Ann Curry. A few days after the pageant, Upton appeared on the show, whereupon Curry asked her the question again, and received this far more lucid answer:

Well, personally, my friends and I, we know exactly where the United States is on our map. I don't know anyone else who doesn't. And if the statistics are correct, I believe that there should be more emphasis on geography in our education so people will learn how to read maps better.

Of course, part of the challenge of the final question portion is being able to think on your feet, but Upton certainly redeemed herself when given her second change.

How Did She Feel About Her Answer?

To Upton's credit, she laughed off her admittedly unintelligible answer, telling Lauer and Curry on Today, “I am sitting here laughing at myself. Is that really me? It’s like I’m not in my actual body.” She continued, "I made a mistake — everybody makes a mistake — I’m human. Right when the question was asked of me, I was in shock."

Did She Do Any Other TV Appearances?

Why yes, yes, she did! While Upton wasn't exactly a shoe-in for Jeopardy, she was invited to participate on Season 16 of CBS's Amazing Race , where she and boyfriend Brent Horne finished third. As a result of the Amazing Race, Upton was given the opportunity to visit some of the Asian countries she spoke of in her initial answer, although South Africa and the Iraq were not destinations on her trip.

What Is She Up To Now?

Upton recently made the exciting announcement on her Facebook page that she had joined the network of business professionals found on LinkedIn. According to her profile, Upton has left her beauty pageant days in the past, though she is now in the market of answering questions as a real estate agent for Keller Williams in Brentwood, California. Her profile states that she "truly enjoys helping her clients find the right homes, sell their properties, or find the right type of investment properties."

Her LinkedIn also boasts an impressive resume of TV, commercial, and print appearances both as a television personality and as a model. But for now, it seems that Upton has found her true calling in real estate, and will be helping many Americans find their new homes on maps in her latest profession.