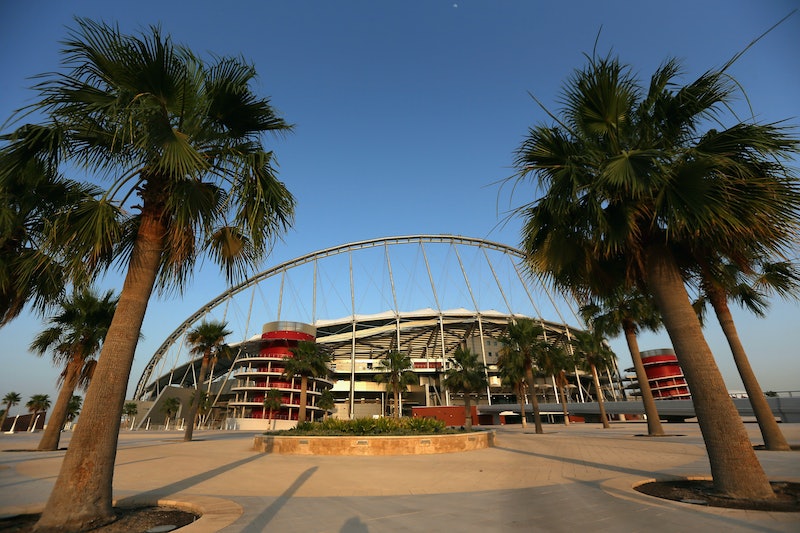 The 2014 World Cup is in full swing down in Brazil, but you think those guys look hot now? Just wait for the scorching hot 2022 World Cup in Qatar. Already steeped in multiple, massive controversies — allegations of corruption in the selection process; the state's appalling rates of construction-related deaths; a call by U.S. senator Bob Casey for FIFA to change course and bring the Cup stateside — there's one very simple question at the forefront of everyone's mind. How would the teams even handle that kind of heat?

In the first place, it's important to understand just what's meant by the word "heat" in this context. On the day the World Cup began, the temperature in Qatar was... wait for it... 117-degrees Fahrenheit. That's a high figure, but the average summer heat still stands at about 105-degrees, and could crack 120 in Doha, where the event's huge stadium will be built.

For a relatable comparison, imagine leaving your car parked in 90-degree heat and sunlight for ten minutes, then jumping inside. Within that time, the inside of the car will heat up to about 109-degrees, creating that unthinkably hot, don't-touch-the-steering-wheel oven-style interior that we've all surely experienced one time or another. Now imagine pushing that number about 11 degrees higher, and then playing soccer for an hour and a half.

While World Cup participants are some of the most elite human bodies the world has to offer, they're still human. And research into how those levels of extreme heat can affect even a fit person tells a worrisome tale for the 2022 tournament. The most serious risk is that of outright death by means of heat stroke, a condition reached when the body's core temperature exceeds 105-degrees.

Even doing exercise, strenuous activity, or just languishing in 90-degree heat could eventually land you with heatstroke, if you sweat out too much fluid and don't keep hydrated (the body can lose a half-gallon of water in just ten minutes in such conditions). In heat nearly 30 degrees higher the risks become all the more imposing, grueling and immediate.

At the point the core temperature of a human body ticks over 105, heat stroke can leave you vulnerable to disorientation, mental impairment, vomiting, and ultimately, death.

There have been a couple different solutions for these health obstacles, as offered in the lead-up Qatar's selection — that the games will be played in a strictly-climate controlled stadium, and a suggestion by FIFA's general secretary that the dates could be moved to the winter months, stretching the 2022 World Cup into 2023.

But this much is certain, regardless of promises of air-conditioning or seasonal shifts: The people tasked with building the World Cup infrastructure won't get those luxuries, and the resulting human cost could be astronomical. Qatar's record on construction deaths, in particular the deaths of migrant workers, is horrifying.

In 2012 and 2013, 964 workers died during construction projects, with 246 succumbing to "sudden cardiac arrest," as reported by The Guardian. And as has just been shown in Brazil, the people who bear the worst brunt of the World Cup coming to town are the people who have to build the infrastructure to hold it.

You can watch The Guardian's award-winning reporting on the crisis above, though be warned — it's disturbing. Starting from such an awful baseline, activists fear a Qatar World Cup will bring yet more surges in migrant worker deaths. Workers whom, even when they survive, are often unpaid. Working in dangerous conditions under a virtual slavery system, these are the hapless people who will really be feeling the heat at its most deadly.