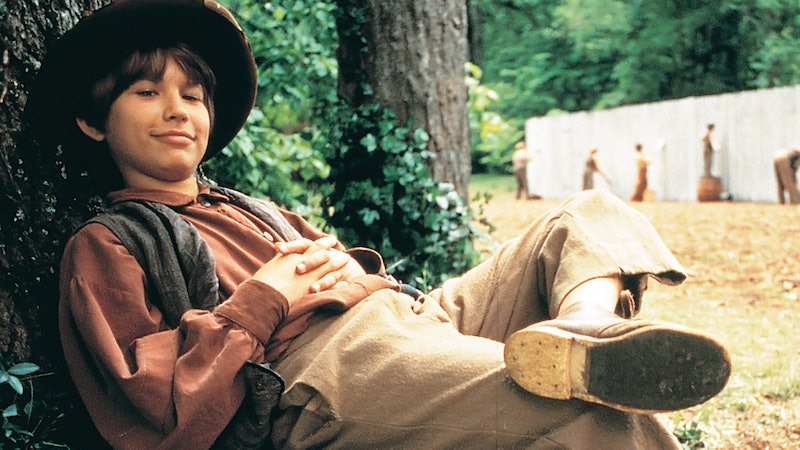 Being an adolescent in the 1990s meant several things: You probably had a see-through plastic telephone (attached to the wall of course), your literary preferences tended toward R. L. Stine, you had some sort of Velcro footwear, and you most definitely had a bedroom wall covered in magazine cutouts of Jonathan Taylor Thomas. You know, the super adorable middle brother on Home Improvement, and the young tyke who voiced Simba in The Lion King , out 20 years ago Tuesday. But it's been years since we saw him on made-for-TV movies and we're a little concerned: What ever happened to the most swoon-worthy crush of our childhood?

Jonathan Taylor Thomas first caught our attention in 1994's The Lion King, arguably the best animated Disney film of all time. Thomas voiced young Simba, who slayed us with his emotional prose after the death of his father, and ignited something deep inside us (which we couldn't quite put our finger on at the time) when he sang "Just Can't Wait to Be King." And even at a young age, we wondered what glorious face could be voicing Disney's most lovable lion.

We first got a glimpse of Thomas in Home Improvement, the half-hour comedy sitcom starring Tim Allen as "Tim the Tool Man Taylor" with a wife, a nosy neighbor and three sons. Thomas started on the show in 1991 as Randall, or Randy, the uber-cute middle son who went on to be a social and environmental activist, a vegetarian, and a skeptic of organized religion. He was the hot hippie boy we all fantasized about corrupting with a trip to the mall and a double Big Mac.

During his stint on Home Improvement, which lasted until 1998, Thomas took on a slew of family-friendly Disney roles, including Man of the House, the Adventures of Pinocchio, and our personal favorite Tom and Huck, which also starred a young Rachel Leigh Cook as Thomas' love interest. In 1998's I'll Be Home for Christmas, Thomas played a college student trying to get home for Christmas (and trying to woo a teenage Jessica Biel).

In 2000, Thomas took another voice role as Tyler Tucker in The Wild Thornberrys, and that same year he had a small role on Ally McBeal. From 2002-2003, Thomas played opposite fellow nostalgic hunk Tom Welling on the CW's Smallville. His role was Ian Randall, and if you don't remember the gloriousness that is JTT in a letterman jacket, here's a reminder:

Thomas would go on to guest on a few other sitcoms like 8 Simple Rules and Veronica Mars, but he soon disappeared from our TV sets and left a gaping hole that could only be filled by his return in 2013's Last Man Standing. Who knows what JTT was up to in the interim (apparently he graduated from Columbia!?) but we seriously need more floppy-haired JTT in our lives, stat. And just in case you forgot, here are a few fun facts you may not have known about the actor:

It's that baby face, man.

Which proves even short dudes can charm us like the best of them.

3. He's a vegetarian, and doesn't use products tested on animals.

Apparently, JTT became a vegetarian at the age of 4 (I too became a veggie at 4 years old — does this make us soul mates? Probably).

Come back to us, Jonathan Taylor Thomas, there's still room for a post-adolescent magazine spread to find a spot on our bedroom walls.

More like this
12 Years Ago, Austin Butler Manifested His Oscar Nom In This Disney Movie Scene
By Jake Viswanath
Sandra Bullock’s Razzies Speech Proves She’s The Ultimate Miss Congeniality
By Sam Ramsden
Zach Gilford Admits He Forgot Taylor Swift's Name When He Starred In Her Music Video
By Jake Viswanath
Rupert Grint Just Shared A *Major* Update About Ron Weasley’s Future
By El Hunt
Get Even More From Bustle — Sign Up For The Newsletter
From hair trends to relationship advice, our daily newsletter has everything you need to sound like a person who’s on TikTok, even if you aren’t.