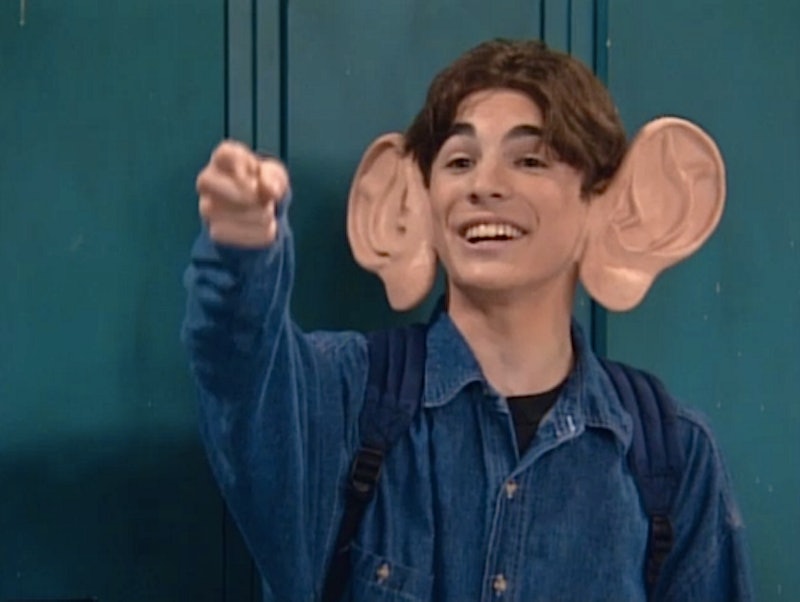 Anyone who spent time as a child giggling uncontrollably at the exuberant antics of Earboy and Jimmy Bond Agent 1/7 has taken at least one moment since All That went off the air in 2005 to wonder what happened to one of our favorite kid comedians: Josh Server. Bustle had the chance to catch up with Server to chat all things All That and learn a little bit about what he's up to now that he's permanently hung up those goofy, prosthetic ears.

Post-All That, Server is still fairly involved in the world of kid shows. Besides having pitched a few of his own tween shows over the past few years, Server very recently appeared on Ariana Grande's Nickelodeon show Sam & Cat. Of course, we can't be sure the show's young viewers knew the exact, nostalgic importance of Server, star of one Dan Schneider's original televisual masterpieces, appearing on one of Schneider's contemporary hits, but we can go ahead and appreciate the brief reunion on their behalf.

And luckily for fans of All That who've since grown a bit past the age at which it's acceptable to watch tween sitcoms, Server is actually working on quite a few projects that might fall into our present day scope. After taking a bit of a break from Hollywood, shortly after starring in a web series with fellow All That alum Kenan Thompson (below, with Server), the actor is back in the game.

"I’ve been finding my way back to it in smaller doses the last couple of years, but recently I’ve really made a commitment to go all out and really start doing it a high level and things are really starting to happen," he says. One of those things is a short film, World Peace , that Server says is set to hit the festival circuit. It has to be a little tough transitioning from being the guy everyone remembers from their childhood to a dramatic actor in indie movies, but Server seems optimistic. "I’m very excited because nobody’s ever seen me do anything like this," says Server. "It’s always a little nerve-wracking to see how you’ll be perceived after all these years of somebody knowing you in certain way to see you in a completely different way."

Still, it seems impossible that fans would be unable to get on board with Server's new ambition. He is one of the folks who turned a generation onto sketch comedy long before they were old enough to begin tuning into the much raunchier Saturday Night Live. Of course, that doesn't mean we weren't infinitely curious about what it was like to be on one of Nickelodeon's biggest shows during the cable network's veritable, slime-covered heyday.

All That's Lunch Breaks Were Better Than Yours

Apparently, taking a lunch break at the Universal Studios theme park was not only common, but easier than shuffling into your kitchen to make a turkey sandwich for the kids on All That.

"We were on the lot at Universal [Studios, Orlando] and we used to sneak into Universal all the time and that wasn’t like hard. We literally just walked out of our door off the sound stage and we were technically in the park, so it wasn’t like we were breaking any rules, we just walked outside," says Server. And getting in free wasn't even the best perk. "We would go on lunch breaks and ride rides ... and then all the people got to know us there, like some of the people who like worked at the park and they were always like super cool to us. They’d let us like, kinda cut. We weren’t trying to be jerks, but we cut a lot of lines. (Laughs)."

It beats a #saddesklunch, but don't be too jealous: It's not like the Wizarding World of Harry Potter was a thing at the time.

Disneyland Was An Ordeal For An All That Star

"I went to Disneyland with Kenan and Kel [Mitchell] one time and we literally could not walk," he says. "It was at the very prime of the show and All That was popular, but Kenan and Kel were just so recognizable everywhere they went." Luckily, the folks and Disney gave Server, Thompson and Mitchell the full celeb treatment so they could make their way around the park, but according to Server it was still "nuts."

Josh Rode The Slime Geyser, All For You

The stars of All That had to run around to press events, just like any TV star does, but not all of the events were your average celebrity appearances. "They’d have us do promotional stuff, where we’d be like three of us, like Amanda [Bynes], me and Lori Beth [Denberg] in New York and we’d be opening something," says Server.

But when they weren't being shipped up to New York to meet and greet with fans, Server was making appearances on basically every conceivable Nickelodeon show including Guts with Mike O'Malley (AKA Kurt's father on Glee), where Server climbed the infamous Aggro Crag, and Figure It Out, where Server was sufficiently slimed (video below — you're welcome).

Still, the worst (or maybe best?) of all of these appearances has to be when Server was strapped to the slime geyser at Universal Studios, which could be seen after the credits of just about every Nickelodeon show at the time. This is not a Jimmy Bond sketch: Server really let Nickelodeon tie him to a pipe full of green slime and he lived to tell the tale.

"There’s being slimed and then there’s like really being slimed. So I think it was for a promotion or a commercial, but they literally strapped me to the geyser and just let it go off," he says, adding "It was fun, I had a good time. All for the comedy." This guy. While the geyser's slime may have been less goopy than the usual Nick slime (more corn syrup, less green water), that's the definition of taking one for the team.

"When we were young we’d have to spend, we’d go to school on Sundays so it would be like a six day work week," he says. And while they may technically have been attending class, it wasn't like anything the rest of us experienced.

"Picture eight or seven at a time Class Clowns in one classroom. It was a mess," says Server. "These poor tutors should be given awards ... they were the real heroes back then, trying to get all these crazy, artistic kids to try and pay attention to sophomore French." I'll be honest, I don't envy any teacher tasked with teaching a classroom that held the Goodburger guys, Earboy, and Captain Tantrum.

Server makes it abundantly clear that he's grateful for his time on All That, save for one minor detail: He was constantly nominated as the guy to show up in costume at awards shows. "They would put as at an awards show and I was always the one dressed as a crazy character and the celebrities would be like, 'Who the hell is this kid?'" And naturally, the one character who might have blended in a bit better, Jimmy Bond, never made it to a red carpet event. "They never put me in that one! I would've looked normal and kinda suave. Nope not that one. (Laughs)" It's alright, those penguin suits are a bit overrated anyway, right?

And Yeah, They're All That & Still Friends

Server says he still keeps in touch with his castmates, even to this day. "I’ve lost touch with some and I have even closer friendships with others but for the most part everyone’s been real cool and we get together and we have fun," says Server of his All That castmates, though he graciously didn't name names. "As we get together and we talk, I want you to understand that we’re all really grateful ... [the continued attention] makes us feel like we were a part of something really special," he adds.

Of course, just like those of us who were fans of Server's onscreen antics, Server says one person he hasn't lost touch with is Earboy. "I joke all the time that Earboy is going to be with me forever no matter what and I guess there are worse things in life." On that, I think we can whole-heartedly agree.