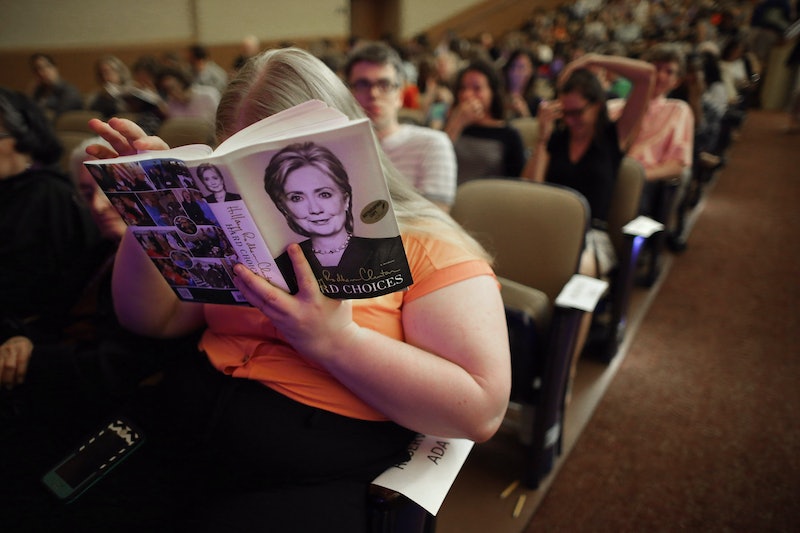 Two weeks after the release of her latest autobiography, Hard Choices , Hillary Clinton is well into her cross-country book tour — and what a tour it is. So far, Clinton has bumped into Justice Sonia Sotomayor in a Virginia Costco; received an award from a nonprofit law firm, handed to her by longtime friend Mary Steenburgen; and spoke at a biotech conference in San Diego. On Wednesday night, Clinton even graced a sold-out audience at San Francisco's historic Orpheum Theatre. Peppered in between these stops are dozens of radio and TV interviews, including the now-famous "we were dead broke" interview with ABC's Diane Sawyer. (Update: Clinton is not "dead broke" anymore.)

With multiple stops a day — and hundreds of "Ready For Hillary" supporters waiting outside each bookstore, auditorium and shopping mall — it's hard not to focus on Clinton’s recent soundbites. Is she out of touch? Will she run for president? Why won’t she run for president? And how can we score some discount tickets to that new Bill and Hillary musical?

But enough about the ambiguities. Clinton’s autobiography, though lackluster in political insight and safe in ideology, is full of definitives. Here's a look at some of the best quotes from Hard Choices.

On Barack Obama And The American Dream...

"We had very different personal stories and experiences, but we shared the old-fashioned idea that public service is a noble endeavor, and we believed deeply in the basic bargain at the heart of the American Dream: No matter who you are or where you come from, if you work hard and play by the rules, you should have the opportunity to build a good life for yourself and your family."

...And Barack Obama And Friendship

"Before one of our meetings in Prague, on that same April trip, [Barack Obama] pulled me aside and said, ‘Hillary, I need to talk to you.’ He put his arm around me and walked me over toward a window. I wondered what sensitive policy matter he wanted to discuss. Instead he whispered in my ear, ‘You’ve got something in your teeth.’"

"She was thin, even frail, but with unmistakable inner strength. There was a quiet dignity about her, and the coiled intensity of a vibrant mind inside a long-imprisoned body. She exhibited qualities I had glimpsed before in other former political prisoners, including Nelson Mandela and Vaclav Havel. Like them, she carried the hopes of a nation on her shoulders."

On The Iraq War And Regret

"I held out against using the word mistake. ... In our culture, saying you made a mistake is often taken as weakness when in fact it can be a sign of strength and growth for people and nations."

"Memories of Benghazi will stay with me always, and they will shape the way America’s diplomats do their jobs in the future."

On Her Mother's Strength

"When I got old enough to understand all this, I asked my mother how she survived abuse and abandonment without becoming embittered and emotionally stunted. How did she emerge from this lonely early life as such a loving and levelheaded woman? I’ll never forget how she replied. “At critical points in my life somebody showed me kindness,” she said."

On Her Little Nail Polish Secret

"I took off my shoes and walked barefoot through the pagoda’s magnificent halls. Security guards hate removing their shoes... But the American journalists thought it was great fun and loved getting a look at my toenail polish, which one described as 'sexy siren red.'"