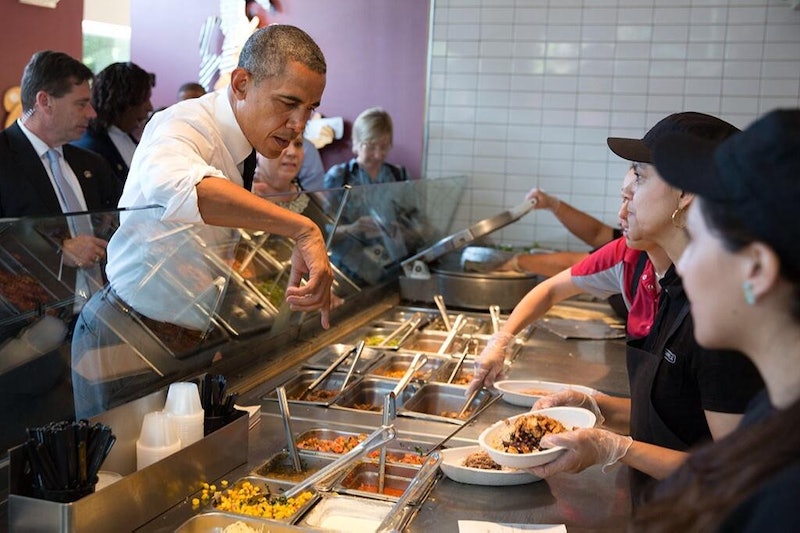 I don't care if you're the president of the United States of America — if I got yelled at for overreaching at Chipotle, then you should, too. Right before he spoke at the White House Summit on Working Families on Monday afternoon, Obama "overreached" at a Chipotle in Washington, D.C. for a quick lunch. White House photographer Pete Souza then threw him under the bus by tweeting a photo of the president reaching over the sneeze guard to pick out his toppings.

"It had been awhile since I had the burrito bowl," Obama told the audience at the summit after his lunch. "It was good." Burrito bowl? Interesting. That was, coincidentally, what I was ordering when I was promptly shut down by Brandi. It really is the best thing on Chipotle's menu, though, and one can get overzealous when ordering. So not only does Obama have really good taste (but we all knew that, judging by his other recent lunch choices), this is further proof that he's human, like the rest of us.

While the folks at Chipotle may have gone easy on him that day, the rest of the country did not. As soon as Souza's photo was posted to the Twittersphere, people started attacking left and right, calling the president out on his grave faux pas.

One person even went so far as to file a formal complaint with Chipotle's customer service, calling the incident a "national outrage" and pointing out that "the gentleman violated the sanctity of our Chipotle code of conduct":

And then there were the ones who applied Obama's unforgivable Chipotle behavior to larger issues. Does this mean we can call it Chipotlegate? Are we there yet?

And speaking of Republicans, one tweeter posted a pic of Obama's 2012 presidential opponent Mitt Romney at Chipotle, and oh what a difference:

More like this
Scotland's First Period Dignity Officer Is... A Man?
By Darshita Goyal
Dunkin’s Pumpkin Spice Latte Is Officially Back This Week
By Mia Mercado
Which Cast Member of 'Westworld' Season 4 Has the Highest Net Worth?
By Meg Walters
What Is Ben Affleck's Net Worth? At 50, The Oscar Winner Makes 8 Figures Per Film
By Meg Walters
Get Even More From Bustle — Sign Up For The Newsletter