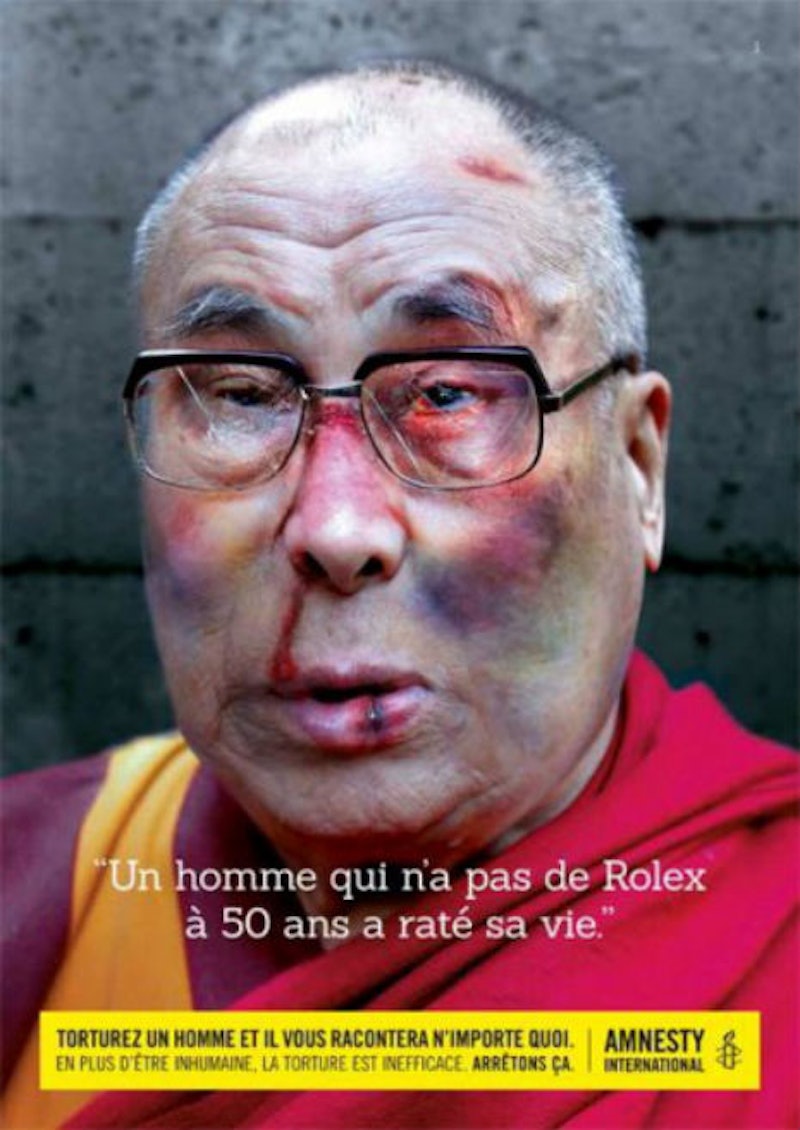 One of the biggest criticisms against political torture is that those who are being tortured will say anything just to make the pain stop, distorting the truth and creating a moral catch-22 for everyone involved in the process: If I confess, I'm lying, but if I don't, what else will I have to endure? This is the angle that Amnesty International's provocative new ad campaign is taking. It features three highly recognizable faces — Karl Lagerfeld, the Dalai Lama, and Iggy Pop — photoshopped into bruised and swollen messes.

Each image features a "confession" that you'd never expect from these figures in bold, white text. Underneath the Dalai Lama, for example, it says, "Un homme qui n'a pas de Rolex a 50 ans a rate sa vie," or "A man who doesn't have a Rolex by age 50 has wasted his life." The statement turns the Dalai Lama's commitment to a compassionate, non-judgmental, and non-materialistic lifestyle on its head.

The picture of Karl Lagerfeld has him purportedly confessing that flip-flops and a Hawaiian shirt are the height of fashion.

The issue of political torture is highly fraught in general and denounced by Amnesty International in particular. Regarding American torture practices, their website says,

The images were created by Amnesty International Belgium and have already created an Internet firestorm since their release earlier this month, especially because it is not clear whether the Dalai Lama, Lagerfeld, and Iggy Pop gave permission for their faces to be used this way. In addition, the picture of the Dalai Lama in particular has disturbed viewers to the point where some news outlets have removed it.

As someone who believes that torture naturally leads to a misrepresentation of the truth (did the Spanish Inquisition teach us nothing?), I think that the ads are certainly effective. They shed light on an issue that can get swept under the rug in deference to more attention-grabbing (though no less important) political problems, like the situation in Iraq and the situation in Ukraine. However, it disturbs me that the three featured celebrities may not have given their permission. Although I can only hope that they agree with the message behind Amnesty International's campaign, AI using their fame but not their consent would be a cheap, manipulative trick.

If you'd like to find out more about the human rights issue of political torturing, you can peruse AI's website. For more examples of thought-provoking ad campaigns, you can take a look at the recent Cannes Lions winners.