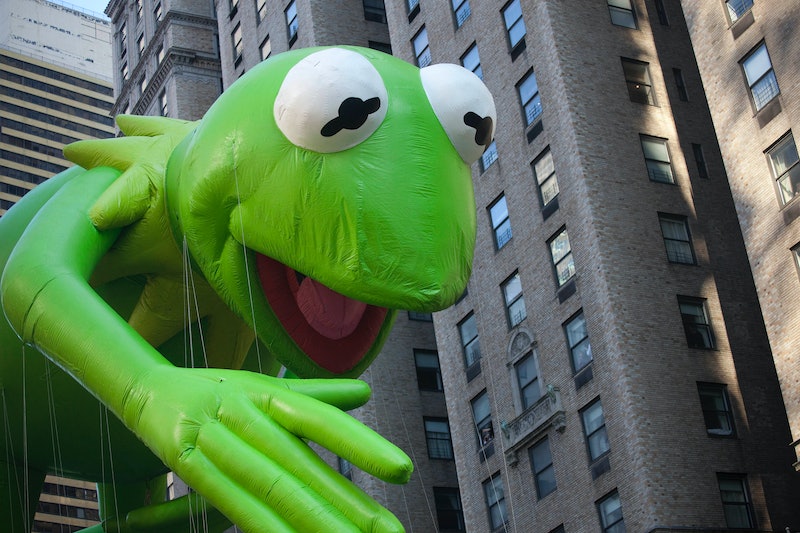 Kermit The Frog is officially racist — but apparently that’s “none of my business.” If you’ve been wifi-less for the past few days, you might’ve missed Kermit The Frog’s sudden comeback. The fuzzy felt muppet from your childhood became a sudden social media sensation thanks to a series of viral memes...that convert him into a total bigot.

Since June 20th, Kermit memes have been appearing on Facebook, Twitter, and Instagram, featuring photos of the frog (typically sipping milk or tea) alongside profanity-laced, sexist, and racist comments, each ending with the words “but that’s none of my business.” There's even an entire Instagram account devoted to the memes, which has over 130,000 followers.

To make it even more Internet-trendy, if you will, some of the memes even included photos of the recent internet sensation Jeremy Meeks (read: prisoner with much-praised mugshot).

While some people clearly think these memes are hilarious, I think they’re obscene. They’re blatantly racist, with a large portion of the memes using racial slurs and assigning demeaning stereotypes to black people. They’re also incredibly disrespectful towards women and, by implication, to the men to whom they are presumably assigning these quotes.

Also, on a much more minor note, poor Lipton. In what has to be the most unfortunate form of accidental product placement to occur in a long time, the majority of the memes use a photo of Kermit sippin’ Lipton tea,

The @DisneyWords Twitter account tried to redeem Kermit’s reputation by tweeting one of the frog’s old quotes: “It’s nice to be important but it’s important to be nice.” Nice try, but I think it’s too late for that.

Fortunately, it seems that the Twitter majority is now leaning in the same direction as me. Although #Kermit is still trending on twitter, most of the recent tweets on the issue are demanding that the frog shut up. One man even posted an Instagram photo of bound-and-gagged plush Kermit along with the caption “Finally someone did me the favor and shut #Kermit up. Now I can continue to sip on my Coke with ice and not tea. Good Morning!”

More like this
How To Use TikTok’s Voice Filters To Sound Like A Cat, Robot, & More
By Alexis Morillo
You Can Save Up To 40% Off On TikTok’s Favorite Products This Black Friday
By Kristine Fellizar and Alexis Morillo
The Best Memes & Tweets About Twitter’s Potential Shutdown
By Alexis Morillo
How To Switch Back To A Personal Instagram Account From A Professional One
By Alexis Morillo
Get Even More From Bustle — Sign Up For The Newsletter