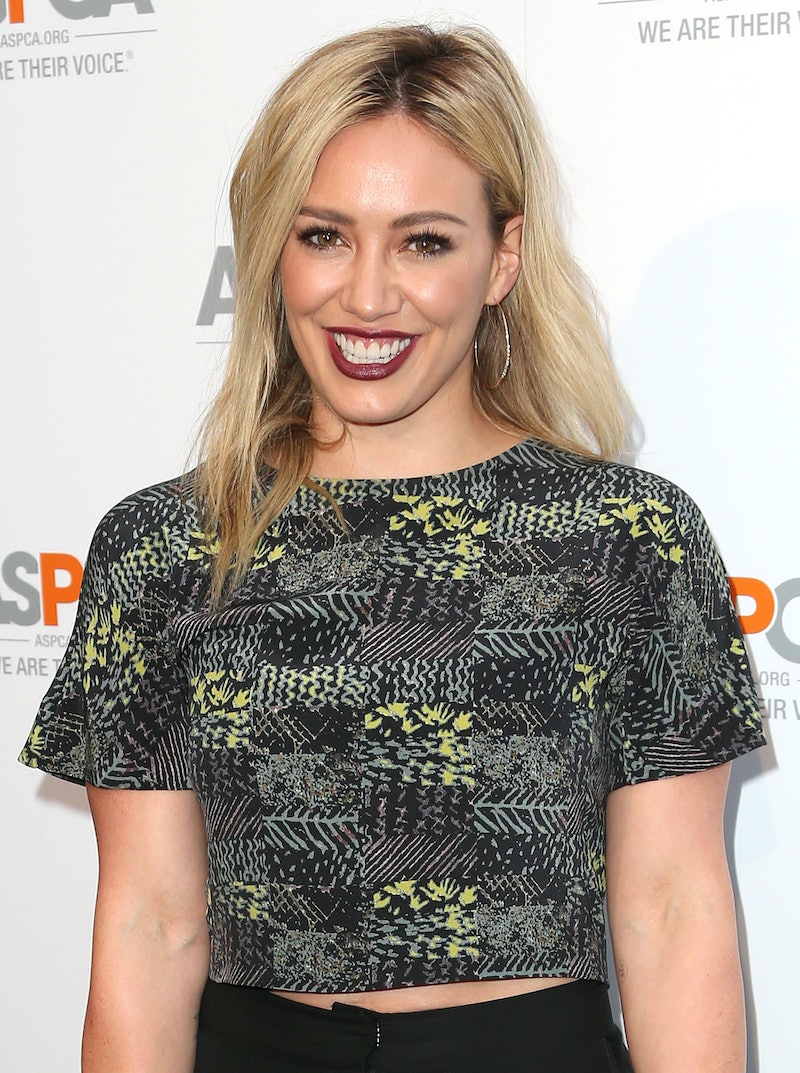 It seems like it’s been eons since we’ve heard any new music from Hilary Duff. Remember how you had "Come Clean" stuck in your head for the entirety of 2004? Yeah, those were simpler times. For years, we haven't had a calming Duff pop song to soothe us, so when can we hope for Hilary Duff’s next album anyway? She’s been working on her next studio album for awhile now, and there appears to be a light at the end of the tunnel! That's right — we could be seeing more tracks from the Lizzie McGuire alum by the end of the year.

In an interview with MTV News, Duff revealed that her next single would be released very soon — of course, we don't have a time stamp on that single, but, hey, we'll take "soon"! Following the release of the single, the star estimated that the full album would debut by fall of this year.

This album has taken some time for Duff to craft. In May of last year, Duff confirmed via Twitter that she was in the studio banging out tunes for her next record. (In response to speculation that she was trying for a second baby, Duff tweeted: “The only baby I’m working on is my album." It never ceases to amaze me how much time has passed since Lizzie McGuire — how does Hilary already have one child?! Girl has come a long way personally and thematically from singing impromptu duets with her brunette doppelgänger.)

This record will be Duff’s fifth studio album to date, and ends a near seven-year hiatus from the pop charts — her last album, Dignity, came out in 2007. Since Dignity, she’s gotten married, had a child, and separated from her husband. And it seems her next release will revolve around those life events. As she told MTV.com about the inspiration behind her new tracks:

It feels good to be in the studio. It feels good to be talking about my last few years — the high points and the low points. I really just want to be honest and be an open book for my fans to know where I’ve been and what I’ve been doing, how I feel and all that good stuff.

Along with her chosen subject matter, Duff’s musical style has reportedly matured since her Disney days. Ed Sheeran has even written some tracks for the upcoming album. According to Sheeran, the sound they went for is a bit more “acoustic” and has an “indie pop” vibe. Rather than the bubblegum princess we remember from back in the early 2000s, Duff’s shooting for a more alternative style. Sheeran said in an interview with MTV.com:

I feel like her record is not what they will expect. Obviously she comes from Lizzie McGuire and that pop world, but she’s more grown up now, so it’s more of an adult alternative acoustic sound.

So, in the upcoming months, we can start looking for Duff's album under the genre of Adult Alternative Acoustic in iTunes. To tide us over until then, you best believe we'll be listening to "Hey Now" on loop.