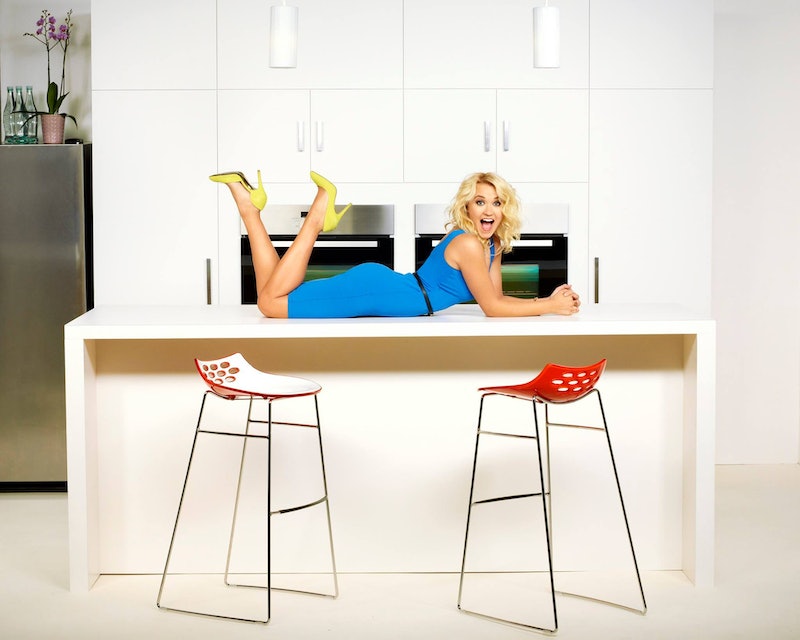 While you're watching Pretty Little Liars, you're probably catching previews of ABC Family's new show, Young and Hungry, which premieres Wednesday night. And you're probably thinking that you know that girl in the preview from somewhere, you just don't know where. And if I'm right, you've just outed yourself as a total Hannah Montana fan, because Young and Hungry star Emily Osment is best known as playing Lilly, Miley Cyrus's BFF on the show. But now, she's taking on a different sitcom, where she'll be playing a food blogger who gets hired as a personal chef to a young tech exec who, let's be real, she'll probably fall in love with.

But it's been three years since Hannah took off that dreadful blonde wig for the last time, and the now 22-year-old Emily is finally free from living in Miley's shadow. Now that she's a leading lady, though, what's she been doing in the meantime? Right after Hannah ended, Emily went on to star in Cyberbully, the 2011 ABC Family movie that tackled online bullies in a so-bad-it's-good kind of way. Since then, Emily's kept herself busy with different, smaller projects, like recurring voice roles on Family Guy and a guest spot on Two and a Half Men. Not too shabby.

And, of course, Emily did what every Disney kid is destined to do: Release an album. Emily's stab at music, Fight or Flight, was released in 2010 and she spent years afterward promoting it. Most recently, Emily released a song with Daniel Schechter of Ramshackle in 2013, and in 2014, they recorded a different song with him called "Manners." And she has over three million followers on Twitter, which means there's a good chance Young and Hungry will succeed.

Now, Emily's pumped about her latest project, mostly because it allows her to tackle a more grown-up role. "I'm excited for my fan base from Disney to transfer over to this show because it's a little more suggestive and sexier," she says. "From the fans I hear from on Twitter, they're about my age and are watching ABC Family and Pretty Little Liars, so this isn't too out of the box."

Hopefully, Emily gets to stick around for awhile, and Young and Hungry — which is produced by another formed Disney star, Ashley Tisdale — won't join the sad, canceled ranks of Bunheads and Jane By Design. You know how fickle those ABC Family audiences can be. If it's not Pretty Little Liars, they (and usually, I) don't want it!