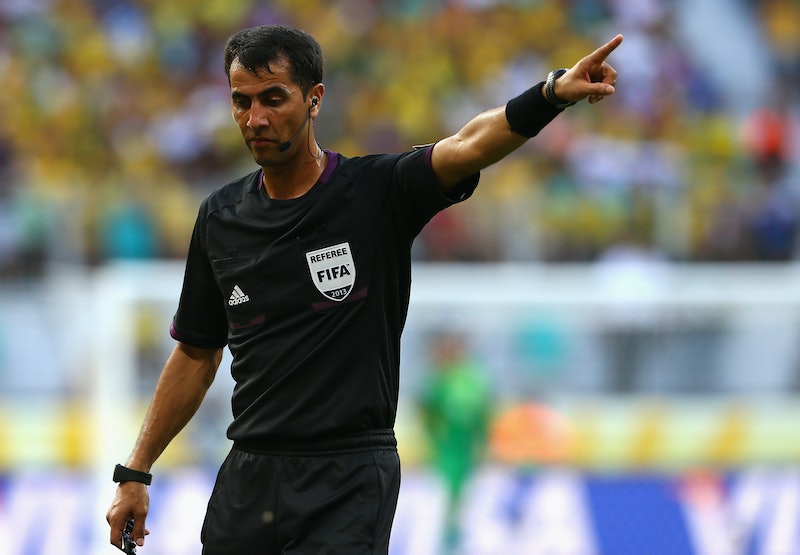 Thursday’s United States-Germany game is creeping closer, and prominent referee Ravshan Irmatov of Uzbekistan has been selected by FIFA to officiate this game. Just recovering from refereeing Mexico's win against Croatia on Monday, Irmatov is back on his feet and ready to, well, hopefully not hand out three yellow cards and an 89th minute red card to players on the field this time.

Like many other soccer refs, Irmatov has been an instructor for quite some time. Taking his father’s lead (who was also a ref), Irmatov is currently 36, and has been a full international referee for FIFA since 2003. He has been seen in several World Cup matches. For instance, Irmatov stood as the official for the 2007 FIFA U-20 World Cup in Canada, and was named The Best Referee in Asia in 2008, 2009 and 2010.

In the 2010 World Cup, he was not only the youngest referee to officiate games that year, but also the youngest to take charge of an opening World Cup match since 1934. Despite, his young age (in comparison to his fellow aficionados), he still took charge in five different matches, including the opening match between Mexico and South Africa, the quarter–final, as well as the semi-final. He was also seen officiating the 2011 Asian Cup final game between Japan and Australia, and is an official in the AFC Champions League.

Whatta guy.. But, let's be honest, all us soccer fans really only tend to know (err, perhaps just admire) what the actual players on the field do. So what exactly are the responsibilities of referee? They’re certainly not kicking the ball around to try and score a goal in the net, and they sure don’t come up with plays to keep the ball out of their defensive territory, so what makes them so special?

Well, a lot. That guy with the whistle who takes charge of the match must enforce every single law of the game. They even have pre-game responsibilities, including the role of ensuring the safety of the playing field (for instance, no large rocks on the field), and confirming that all corner flags and pylons are placed properly. They’re pre-game duties don’t stop there, though — they must be present for the coin toss and then make sure that the game starts on time, no exceptions.

This can certainly be a tiring job once the game gets started. Constantly running up and down the field (nearly, if not more, than the players do), these officials must locate themselves where they can see the action first-hand in order to assess to situation and determine any violations. These guys are always on the lookout and always on the run; after all, it is their duty to stop the game if a penalty or injury is perceived.

Not to mention, refs have to deal with annoying coaches. That’s right, how often do you think a coach tries to argue a call? I played soccer for almost 10 years, and boy have I witnessed my fair share of coaches complain to the ref.

So tune in tomorrow to watch the U.S. national team, and maybe this time pay a little closer attention the ref. Then ask yourself, who do you think is in better shape — Irmatov, or the players on the field?