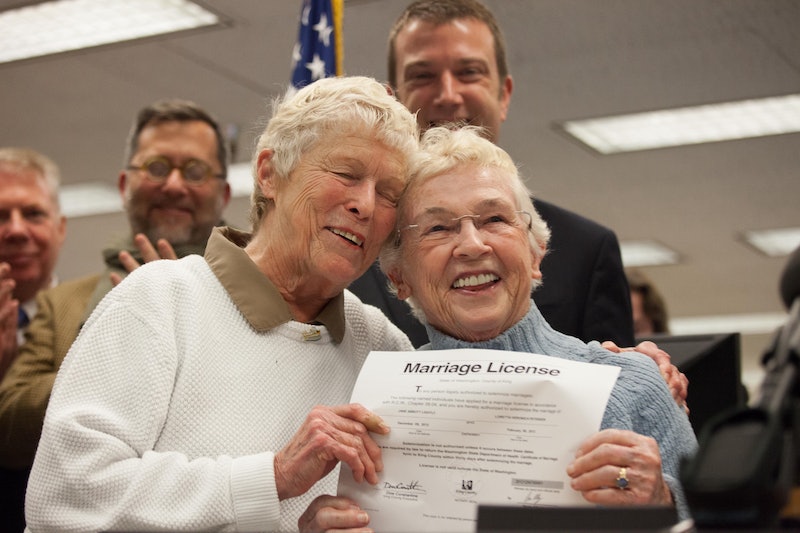 Two more states are one step closer to marriage equality: Federal judges have struck down gay marriage bans in Indiana and Utah on Wednesday, finding both bans in violation of the equal protection clause under the 14th Amendment. The overturn of Indiana's ban, which was means gay couples in the state are allowed to marry and receive licenses immediately. However, the Utah decision, which was made by the 10th Circuit Court of Appeals, has been stayed to set the stage for an appeal to the U.S. Supreme Court.

"[Same-sex] couples, when gender and sexual orientation are taken away, are in all respects like the family down the street," wrote U.S. District Judge Richard Young in his Indiana decision. "The Constitution demands that we treat them as such."

In Indiana, gay couples are already lining up outside courthouses as county clerks throughout the state prepare to issue marriage licenses immediately. Marion County Clerk Beth White said her office in downtown Indianapolis is now open for same-sex couples.

"Chief Judge Richard Young's decision on marriage equality sets forth a clear course of action for this office to follow regarding same-sex marriage licenses," White said in a statement. "It is my responsibility to uphold court rulings that impact this office and that is what I will do."

The ruling will not only apply to Utah, but also to the other states under the 10th Circuit: Wyoming, Colorado, Kansas Oklahoma and New Mexico (only New Mexico allows same-sex marriage). However, gay couples in those states won't be able to marry just yet because the decision has been stayed.

Indiana joins 19 other states and the District of Columbia in allowing marriage rights to gay couples. The Utah decision is now expected to usher in a gay marriage battle on the national stage — at the Supreme Court.