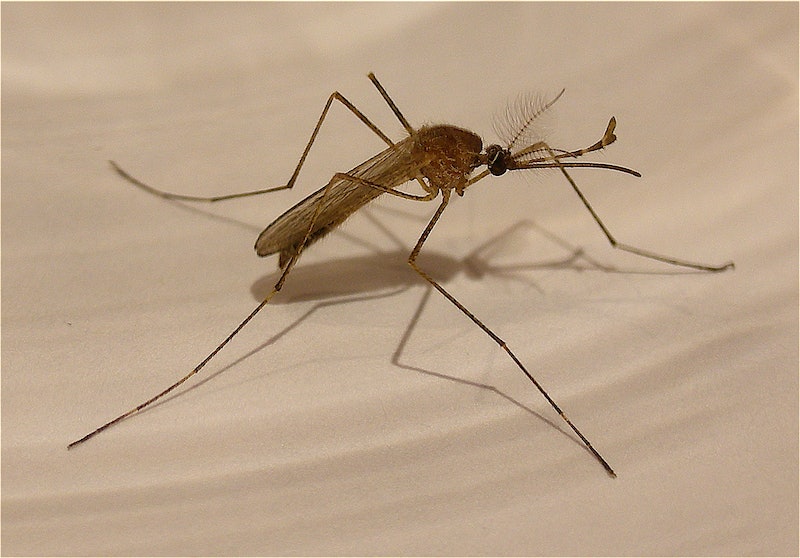 In the summertime, I'm all about sitting, cocktail in hand, outside on a fancy patio or heading out of town to drink shandys by a bonfire in my short shorts. Last year, however, I had to sweat it out in pants after a while because of some seriously bad-mannered mosquitoes that were out for blood, literally. Let's be real, the smell of bug spray is just not sexy and having your boo kissing your neck that has sunscreen AND bug spray on it? That's just downright dangerous. Seriously, I had a friend that smelled so strongly of bug spray and sun-block that I refused to light her cigarette, fearing we would all blow up, ending happy hour for all of us. What can I say? I'm a responsible drinker.

Many over-the-counter bug sprays contain DEET, which was developed as a pesticide, and introduced to the masses in 1957. Bugs hate the smell and it was originally thought to block the insects senses which could stop them from biting humans when applied on clothing and skin. Interestingly enough, just like many chemicals, the effects of DEET on insects and people are still being discovered. Just because bug spray has been around for over 60 years doesn't mean we have all the facts. Bug repellents are generally safe to use, as long as you avoid damaged skin, ingestion, and mixing with other chemicals (like the ones in sunscreen).

Looking for something to save you from those ghastly, itchy, bites this summer, sans chemicals? Nature will, of course, be your hero. You will smell wayyyy more enticing to the general public if you get up on some seriously effective oils that can keep those jerky mosquitoes at bay. Burt's Bees makes a really dope natural bug repellent that's really cheap, but I can never seem to find it when I am traveling to even more mosquito infested areas. Being able to DIY some bug spray will definitely be an envied skill when you realize you've forgotten your own, prefer a natural alternative, and/or find yourself in an apocalyptic scenario where all the drug stores have been robbed by bug spray-drinking zombies.

How to Make Your Own Bug Repellent

Tea tree oil is a natural antiseptic and has been used to treat wounds for centuries. This is my preferred oil because, once we move into August, it's highly likely that I'll need to be applying bug spray on top of existing bug bites. This is not something you can do with a chemical induced bug-spray, since it will cause some serious irritation. Tea tree will reduce the inflammation from any existing bug bites, plus ward off buggies on your next night out.

True Story: I forgot my trusty tea tree oil the other night and found myself outside in the middle of a mosquito pride parade while I was working the patio at my restaurant job. Being that it's a pizza place, I had access to basil oil. I took about 12-15 leaves, mashed them up a bit, then rubbed the oily leaves all over my legs and arms. 20 minutes later, I was the only one NOT complaining about mosquitoes. Basil has over 5000 years of experience in the healing department, and it's got anti-inflammatory, antibacterial and anti-fungal properties. This basil oil will keep you in short shorts all summer.

There is nothing more infuriating then waking up after a good night's sleep with a humungous mosquito bite. I mean, don't even get me started on how rude it is that bugs bite you when your defenses are down. Let's put up a fair fight shall we? On the hot nights where I like to keep my window open for a nice draft, I am definitely dropping lavender oil on my satin sheets and pillowcases to keep those mosquitoes out of my dreams. Lavender oil is known to stop bleeding, so this will also be your go-to for soothing those particularly gnarly bites that happened when you least expected it.

After you've picked your essential oil of choice, add 4 ounces of distilled or boiled water to a spray bottle, then add 2 ounces of vodka or witch hazel. I would say, add about a tablespoon of essential oil to your concoction, but I have been known to free pour. It will really depend on how much bug spray you are going to make at a time.

If you're looking for a great alternative to bug sprays containing chemicals, check out how these 10 brands tested!