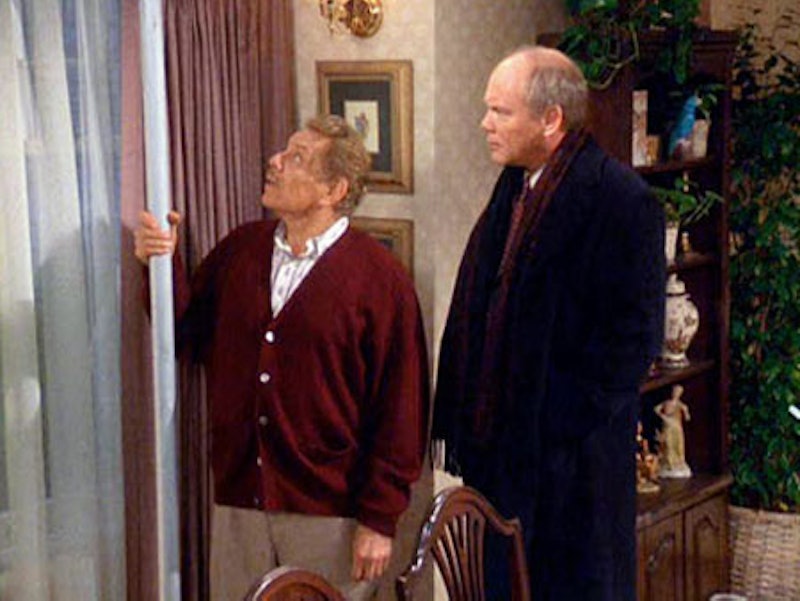 Happy silver anniversary, Seinfeld fans! On July 5, 1989 the pilot episode of Seinfeld first aired. Although it wasn't met with great praise or viewership, the show slowly built to its now enormous following. So let's get to partying, Jerry-style. There are many other ways to celebrate on this auspicious day in '90s sitcom history beyond recreating Festivus, although TV's most famous holiday is definitely an option for your Seinfeld party, bris, proposal, or trip. Although "the show about nothing" rarely stopped with its thematic humor to commemorate religious or national holidays, there are a few party-planning tips to be gained from the gang's exploits. From bakery snafus to accidental hate crimes to deaths, Seinfeld has run the gamut of festive humor, without losing its everyday feel and killer acting. Although Jerry's frenetic life was always entertaining, often the episodes where he and Elaine (or George) are making plans end up in the greatest hijinks, usually involving Kramer ruining a trip, holiday, or other festival.

Whether you want to impress a company Christmas party like Elaine or shock a holiday pool party like George, here are all the things that go into a magical Seinfeld holiday. And don't worry, there will be feats of strength.

What's a holiday party without invitations? Just remember to buy the expensive ones, or you might lose a fiance.

The perfect look for your mood ("The Trip")

If your holiday is more the take-a-trip-to-LA-to-find-Kramer sort, don't forget to look your best. And remember, although the palette is the same, it's about dressing to suit your mood...even if your mood is somehow "morning mist."

These are especially helpful if you're throwing a baby shower at Seinfeld's apartment. Sure, they might eat all the food and overcharge you, but that's the price you pay for illegal cable.

A rabbi with a cable show ("The Postponement")

If you're planning on proposing and then regretting it, be sure to befriend a rabbi with a cable show. Then he can air all your deepest fears on widely-syndicated television.

Your grievances ("The Strike")

And now we finally come to Festivus, the biggest holiday in the Seinfeld calendar. Although many parts of the celebration take careful thought and planning, the airing of grievances will take the most thought. Make sure you plan ahead.

Don't forget the festivus pole! You can buy them here or here, but even if you make your own, remember—you're not allowed to decorate it. This Festivus, for the rest of us. If you want to decorate something, go back to Christmas.

Your strength ("The Strike")

You're going to have to fight this guy, or someone like him. And remember, Frank created Festivus when he was "raining blows" down on a guy over a Christmas present for George, so this holiday is rooted in violence.

A full dinner, with empty plates and wine glasses ("The Strike")

Did you ever notice that they never eat the Festivus dinner? Watch the scene again and look at the plates and cups, since both stay empty the entire time.

Finally, a show that recognizes the necessity for secret liquor at holiday dinners. Bless you, Seinfeld.

When I first saw this episode as a little kid, I thought Elaine's dancing was really cool, and my opinion hasn't changed. You do you, Elaine, and don't let Jerry's hate get you down.

If you're going to an important cultural parade, don't bring Kramer. I repeat, DO NOT BRING KRAMER.

If you're going to participate in a bris Seinfeld-style, you have to flinch at the moment of truth. Sure, the mohel will probably cut your finger, but at least the baby will be fine.

Another babka? ("The Dinner Party")

In case you don't know, a babka is a delicious, bready cake that can be filled with chocolate OR cinnamon, as Jerry and Elaine learn in this wonderful episode.

Partial nudity, if it's a summer occasion ("The Hamptons")

It's not a true summer holiday until you've awkwardly stared down most of your guests' genitals. This rule is especially true for holidays and parties on the beach.

And probably some shrinkage ("The Hamptons")

Seinfeld taught all of its younger viewers about shrinkage, making boy-girl pool parties slightly (but ONLY SLIGHTLY) less awkward. Also, Elaine's off-hand "I don't know how you guys walk around with those things," is priceless.