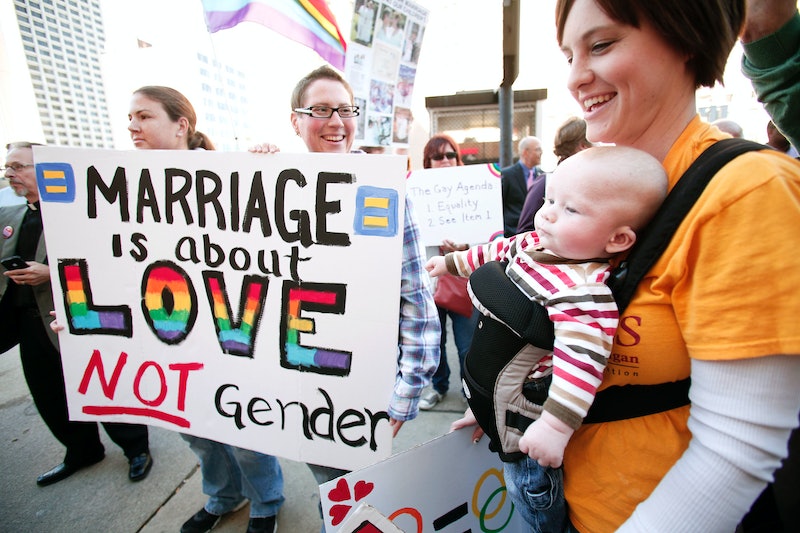 Today has been a big day for not one, but two states. Federal judges have struck down gay marriage bans in Indiana and Utah, finding both bans in violation of the equal protection clause under the 14th Amendment. While the Utah ruling is stayed for an appeal to the U.S. Supreme Court, couples in Indiana are already lining up outside courthouses to say their vows.

Marion County Clerk Beth White in the state's capital city, said that it is her responsibility to uphold court rulings that impact her office and all couples that wish to receive a marriage license will be treated with respect. To accommodate, she opened her office downtown and began issuing marriage licenses to same-sex couples almost immediately. She is conducting civil ceremonies for a $50 contribution to the Indiana Youth Group — an organization supporting lesbian, gay, bisexual, transgender, and questioning teens.

One couple in particular —Craig Bowen, 35, and Jake Miller, 30 — became first same-sex couple to wed in Indiana, in Marion County. The couple has been together for eight years."Our parents don't know yet, so they might be a little mad at us," Miller told IndyStar. "I sent Craig a text and said, 'Hey, do you want to get married today?'"Meet some more newlyweds in Indiana...

It's sure been an emotional day. Here's a big congratulations to those who were issued a marriage licensed today, and to the state of Indiana — it's about time.