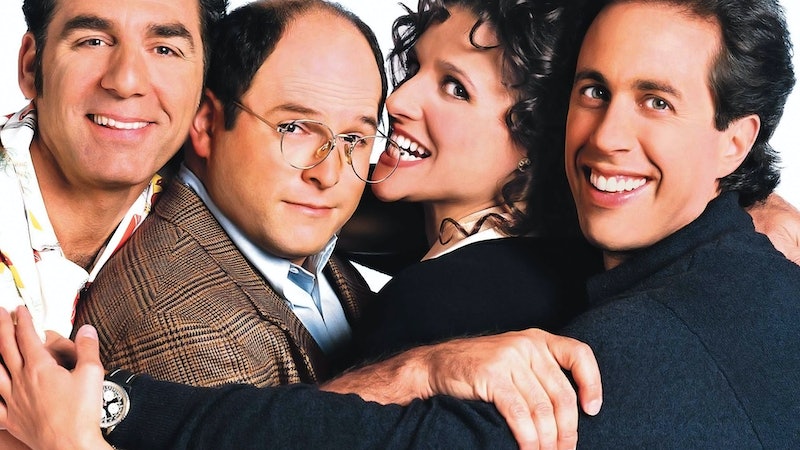 Listen: I am a television obsessive, OK? Particularly of the comedic variety. I study it, I love it, I one day hope to write it on a professional level and make you laugh all the live-long day. But there is one terribly egregious blind spot, for all my TV-loving, that has haunted me for years. I've never seen a full episode of Seinfeld — outside of the finale. I know, I know. It is terrible and unfathomable and a secret shame I've been forced to carry for many, many years. But for its 25th anniversary, I decided to change all that and watch the series' first three episodes. The education starts now.

The fact that I've previously never seen a full episode of Seinfeld was apparently a shocking one. Perhaps its my overly neurotic personality, the fact that I used to live near Tom's Diner when I lived in the city, my love of Larry David's cantankerous over-thinking, or just my general obsession at the altar of comedy's icons. So with the "revised pilot version" (there were two options, original or this) of the first episode, "The Seinfeld Chronicles" queued up, I sat down and prepared myself to meet — finally! — Jerry, George, Kramer, and Elaine.

Now, first and foremost I should admit: the over-hype machine was shackled to this one — almost guaranteeing a bit of a letdown on first viewing. But getting down to brass tacks, Seinfeld's pilot and "Male Un-Bonding" prove their comedic merit in portraying how cyclical the nature of our own idiocy can be as humans. We're all terribly inconsiderate to one another, almost hypocritical with our own dislikes and issues with people — and therein lies the comedy.

Relationships are at the heart of the pilot, starting off with Jerry and George. Their own yin and yang was predominately on display and completely relatable. George, the chronically meticulous over-observer, hinging every opinion on word choice. "Had to? Maybe?" All of this played well off of Jerry's own inability to "read the signals" as it were. Relating to other people — be it a potential paramour or a friend you're just not interested in hanging around with anymore — gives the comedy its legs.

Because whether you want to admit it or not — we're all sort of assholes, intentionally or otherwise, to people in the name of saving face (and avoiding conflict). Once we have what we think we want, we don't want it anymore — much like Jerry's musing on going out in the pilot's stand-up routine. "Once you're out, you've got to get back." It's what we all want to do, but once we're in it, we look forward to getting back to doing, well, nothing.

Which is exactly the premise of the show: it's about nothing! Even I know that much — it's always been the show's tagline. And seeing it now, in play, it's sort of ingenuous. The in-between-y stuff, the off-handed comments and casual (if very neurotic) conversations we have with the people in our lives that we allow to see us at our weird and sloppiest? That nothing is a heck of a lot of something — particularly in the comedy realm. I mean who can't relate to Jerry's handling of a friend he doesn't want to be friends with anymore? I have 100% handled conversations with those types as he said he often does, pretending their a guest on your imaginary talk show. Just interview them until it's over and one of you is out of time.

Truth be told, we weren't really laughing out loud until Elaine came on the scene. Oh, Julia Louis-Dreyfus, how we long to be even a little bit like you. Just a smidgen. A tad. A wee bit (oh you get the point). As Jerry's ex-girlfriend, Elaine is the perfect balance to an otherwise sausagefest-y cast of characters. She's smart, she's funny, but she's not in any way, shape, or form immune from being just as nutters as the rest of them. Man, interpersonal relationships are hard, aren't they? Thank goodness for Elaine, though.

It's hilarious to not only see how, but point out in comedic terms — and in spite of their own intellectual understanding of the concept — that Jerry, George, and Elaine (not so much Kramer, at least at this point) cannot seem to actionably grasp that all relationships, sexual or otherwise, are relationships with other humans. And that all humans deserve to be treated like, well, people. This is something most everyone deals with on some level. Throw in some witty neuroticism and, yeah, we'll admit: we're totally on board.

So, we're going to keep up with our viewings of old Seinfeld episodes — ya happy now, damn it?! No need to be such a Newman about it.