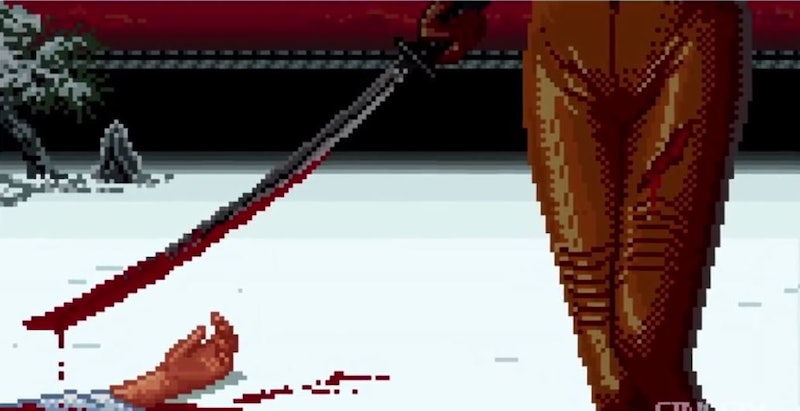 There's a mission, a series of "bosses," and a whole lot of fighting. No, it's not a video game; it's the Kill Bill movies. And now, it's a little bit of both: as part of its "8-bit Cinema" series, CineFix has rendered Kill Bill as short YouTube video in the style of an old 8-bit video game. It's hard to believe that no one has ever thought of the correlation before.

And it's even harder to believe that the video game doesn't actually exist. After all, video games based on movies are a common occurrence: there's video games from most modern movies, from Scott Pilgrim vs. The World to The Cheetah Girls. Sure, cross-promotional video games may not exactly be in the retro wheelhouse of Quentin Tarantino, but it makes perfect sense for many of his revenge flicks. It's good guys vs. bad guys in an ultimate fighting showdown; it's an artful Street Fighter for the big screen.

Not only would Tarantino's movies look good in an 8-bit video game, but the video game world needs more games that look like Kill Bill. Fighting video games are typically notorious for either having no female heroines or sexualizing and objectifying the few that exist. But Kill Bill has both fearless female villains and heroines ready-made: The Bride and her fierce foes like O-Ren Ishii, Vernita Green, and Elle Driver. The characters in Kill Bill already helped to revolutionized the world of film by providing strong (in pretty much every sense of the word) female characters in the male-dominated genre of action films, and they could to the same thing in the world of video games.

It'd also help normalize video games as an art form. As one of the newer forms of media, video games are rarely given their due: they're often thought of as entirely violent and mindless. While a Kill Bill game might not expel the violence part, it would help audiences recognize that as media platforms, video games and films aren't entirely dissimilar.

The detail in the 8-bit Cinema Kill Bill is incredible, and fans of the film will love the two-minute overview of the biggest fights of the films. But there's one big disappointment that the video leaves you with: it isn't real. So what are you waiting for, Internet? Make it so!