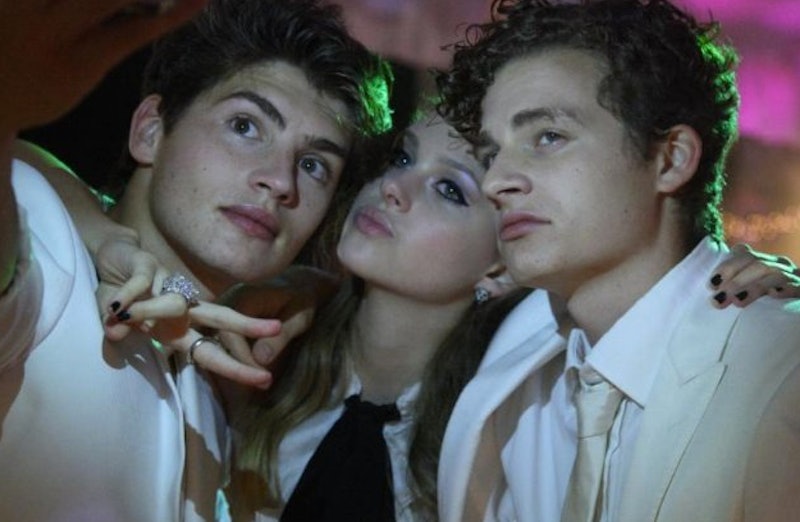 Let's get something out of the way right off the bat: No, the title for the film Affluenza has nothing to do with the flu. It does have to do, though, with wealthy adolescents — or, more specifically, probably how wealth infiltrates the adolescent mind. Now Affluenza 's got a red band trailer, if you'd like to witness that for yourself. Be warned: It is ever so slightly NSFW.

If you've seen any of the many stories following young rich kids — Gossip Girl, The O.C., #RichKids Of Beverly Hills, Whit Stillman's Metropolitan, the list goes on — then you've pretty much got the gist of what Affluenza's about. Here's the plot as described by The Wrap:

[The] story follows aspiring photographer Fisher Miller as he escapes his middle-class life in upstate New York for the moneyed mansions of Great Neck, Long Island, where he moves in with his aunt and uncle while he applies to college in Manhattan. Finding himself on the outside looking in at his beautiful cousin Kate's circle of indulged and entitled friends, he ingratiates himself with a stash of high-quality weed and a vintage camera that he uses to document their hard-partying exploits. Invited to the group's end-of-summer celebration, Fisher becomes fast friends with his host, the fabulously rich Dylan Carson, a long-time admirer of Kate. Before long he is swept up in a heady world of absentee parents, plentiful booze and casual sex. But, as the burgeoning financial crisis spirals out of control, the once seemingly endless stream of money begins to dry up; friendships, romances and marriages melt down; and the glamorous veneer that once captivated Fisher turns toxic.

The cast includes The Flash's Grant Gustin, Faking It's Gregg Sulkin, Boardwalk Empire's Ben Rosenfield, and Bates Motel's Nicola Peltz. They'll get their Gatsby on as hard as they can.

More like this
Emma Thompson, Lashana Lynch, & Stephen Graham Lead Netflix’s 'Matilda'
By Sophie McEvoy
Alicia Silverstone Has Recreated An Iconic 'Clueless' Scene
By Frances Stewart
Everything You Need To Know About The 'Knives Out' Sequel
By Grace Wehniainen
Everything To Know About Netflix's Marilyn Monroe Movie 'Blonde' Starring Ana De Armas
By Grace Wehniainen
Get Even More From Bustle — Sign Up For The Newsletter