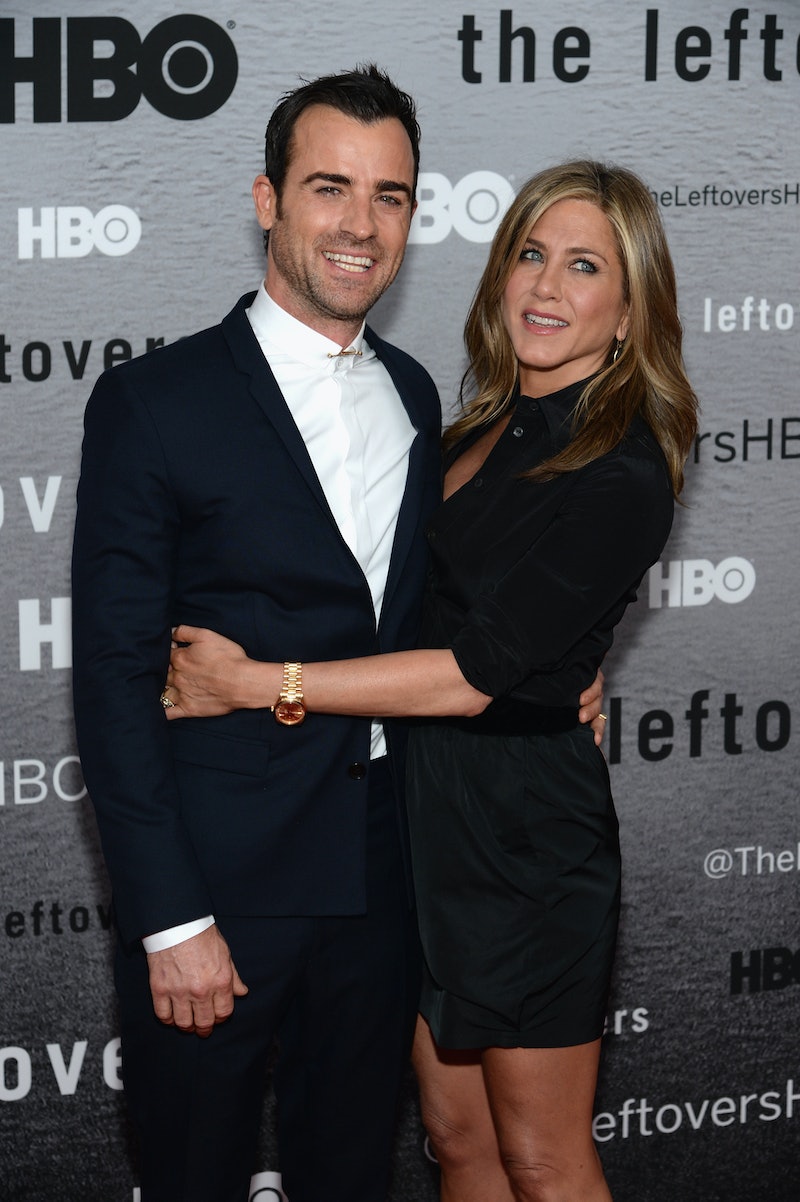 If you could only have three things post-Apocalypse, what would they be? This HBO's The Leftovers star knows exactly what he'd need — Justin Theroux wants Jennifer Aniston by his side if the rapture comes. Well, and his cellphone and keys. If you're shocked that Theroux was so candid about his relationship with the Friends star, you're not alone. This might be the first time the tall, dark, and handsome half of this Hollywood duo has said two words about the couple's relationship. But, if their PDA-filled moments at the Leftovers premiere weren't enough to convince you — Justin Theroux and Jennifer Aniston are still together, so quit it with those "pregnant and alone" rumors.

Seriously, where was Theroux this whole time while tabloids were speculating that the pair might never get hitched? OR, even worse, that he had left a pregnant Jennifer Aniston alone? Apparently, just biding his time until someone could pop the top off of his adorable musings about the couple's extremely happy and healthy relationship. So, sorry, haters — this Hollywood power couple isn't breaking up, in fact, they're running to the alter.

At Monday night's premiere of The Leftovers, Theroux finally ended his silence about his seemingly endless engagement to Aniston with this comment to Extra :

We have hot feet, but we're not going to let you guys know. We're still happily engaged.

There you have it people — so, seriously, quit it with the break-up headlines. Not only do they have zero doubts that they want to tie the knot and become Mr. & Mrs. Fountain of Youth, they're happy. Amazing, right — after how many times the Internet has speculated that a break-up was on the horizon. The 42-year-old actor also gushed that his fiancée was "gorgeous," before saying probably one of the most romantic things ever. When Theroux was asked what he'd take with him in the case of a real-life rapture or apocalypse he promptly answered with Aniston's name and added:

Can we just let Justin Theroux speak on behalf of the couple from now on? I mean, he's pretty damn good at clearing the air. Swoons.

More like this
Jennifer Aniston Is Still Wearing That 'Friends' Dress She Stole From Monica's Closet
By Jake Viswanath
Jennifer Aniston Spoke Out About *That* Viral TikTok
By El Hunt
Did BTS Break Up? Members Explain Their Hiatus & Promise To “Return Someday”
By Alyssa Lapid
Kendall Jenner & Devin Booker Reportedly Broke Up After 2 Years Of Dating
By Jordyn Tilchen
Get Even More From Bustle — Sign Up For The Newsletter