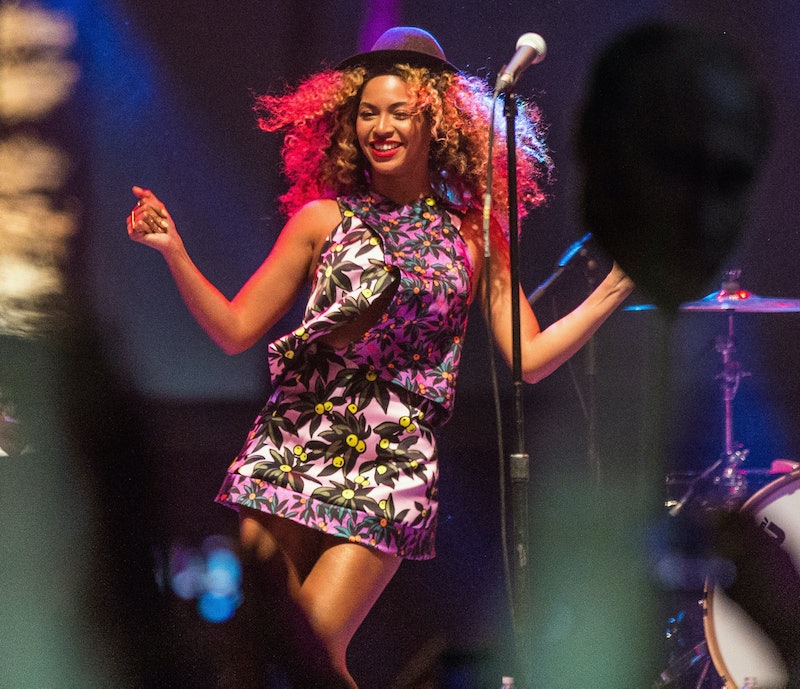 Beyonce and hubby Jay Z are a couple that plays together and stays together. Blue Ivy's parents kicked off their On the Run summer tour this week and I don't even need to attend a single date to know that Jayonce are suh-laying it. When it comes to style, fashion, and presentation, Queen Bey, whose constantly changing hair is rivaled by that of her baby sister Solange, is as fierce onstage and while performing for her throng of adoring fans, known as the Beyhive, as she is when walking red carpets or attending events.

While she has to deal with variables unique to live performing that aren't an issue at static events — like sweating, venue climate, makeup meltdowns, costume malfunctions, and more — Bey never ceases to amaze with her expertly curated stage threads.

Her looks are a mix of fashionable and functional, since she is there to entertain, which includes busting many a dance move. She has to rely on clothes with a fair degree of give and room, and those which won't fail, epically so, if she stumbles or doesn't expertly execute a spin or a booty shake. Not that that would ever happen. Bey's stage attire requires a utilitarian skew, but she never scrimps on the luxe or eye-catching details.

These are 10 of Beyonce's most memorable and fiercest stage looks from her recent years as a solo artist and queen of all pop divas.

At 2011 Glastonbury, Beyonce's glittery, golden, and belted blazer topped black shorts showed of her killer legs and curves. It was glam and functional, since she could dance, move, and sing without sacrificing style. Plus, it was bright enough so that the people in the cheap seats could still see her. Her top was like a satellite or a beacon of light. Make that a Beycon of light.

2. Cute and Curly at Coachella

Check out those thighs of steel! Bey performed with her sister Solange at 2014 Coachella, going cute, casual, and curly, so as not to steal her baby sister's thunder. Of course she elevated things a notch with her fedora and the short hem on her floral skirt was nearly a wardrobe malfunction. Besides thighs that could crack walnut shells, Bey's smile is infectious. She was having so much fun.

3. A Mellow Yellow Mini in the Morning

While performing on Good Morning America in the summer of 2011, Bey donned a thoroughly mod, '60s-inspired, and crocheted micro mini in mellow yellow. She wore the hell out of that dress.

Beyonce performed in Brazil in 2013 wearing a bodycon, boob-loving, and lacy white mini, which was foreshadowed the white lace dress she wore to the Grammys in 2014, which is posted below for comparison.

5. Leather and Lace at the Super Bowl

With all eyes on her during the most watched TV event of the year, Bey brought it with lots of fierce black leather (and lace) at the 2013 Super Bowl. Despite what league officials at the NFL say, I am convinced it was Bey's thermonuclear halftime show that caused the power outtage.

Beyonce was booty(shorts)licious in black in the U.K. at the 2013 Chime for Change event. Her leather boy shorts once again showed off her enviable, shapely legs. This style — shorts and a long-sleeved, semi-sheer top — is one of her faves.

7. Red Hot at the Oscars

Bey was red hot in flapper girl attire while performing at the Oscars. What a sexy throwback, right?

This sparkly and clingy emerald gown at the 2014 BRITs was Bey's take on the mermaid shape. She was a total class act diva here. The booty also drew the eye, even in such an elegant dress.

9. Anything But Basic Black at Obama's Second Inauguration

While there was a ton of discussion about Bey possibly lip-synching at the second inauguration of Barack Obama in 2013, she was anything but basic in a lacy black outfit, braving the bitter, East Coat cold in style. Once again, her boooootaaaaaaay reigned supreme.

Bey opened the 2014 Grammys in a familiar stage style — short shorts that are often high-cut, paired with long sleeves. She seems to prefer this bodysuit construction when she performs, which makes sense, since it gives her room to do her thang. The added element to this particular performance was the fact that she was literally soaking wet.