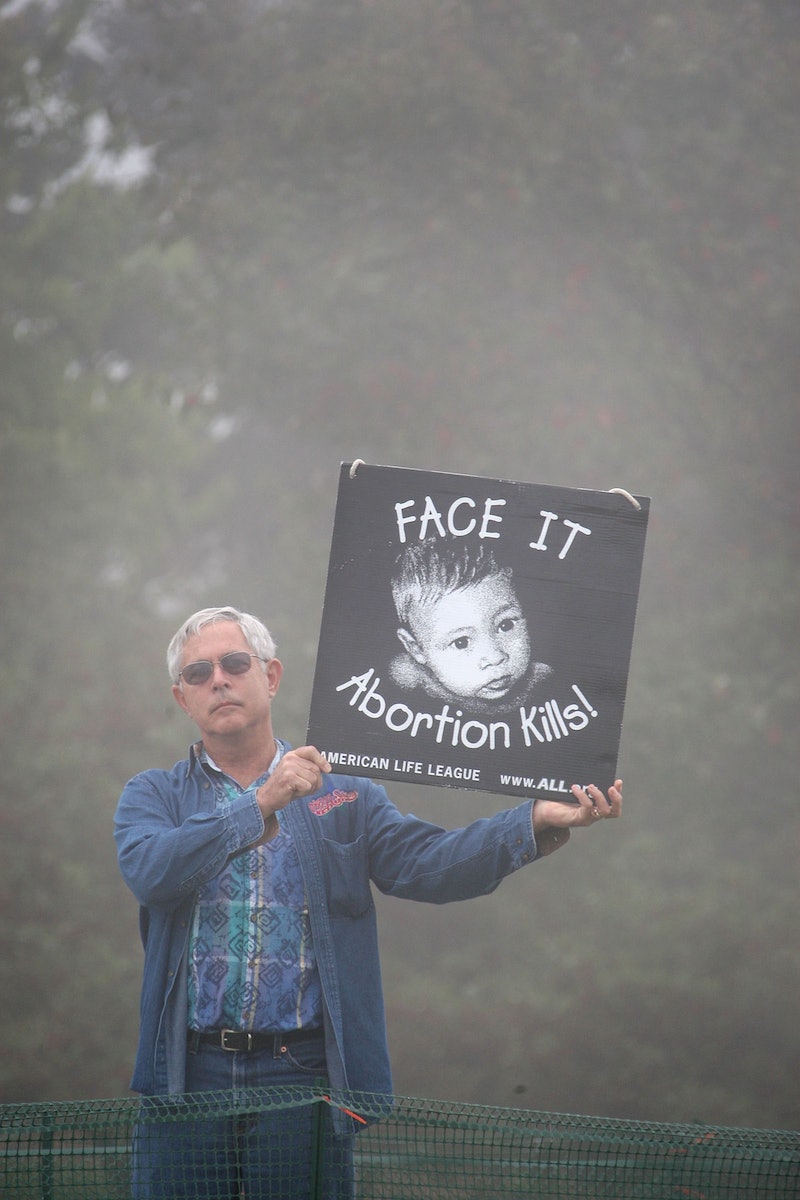 In a startling blow to reproductive rights activists, the Supreme Court has struck down the Massachusetts buffer zone law at the center of McCullen v. Coakley, a high-profile case that ignited tensions between anti-abortion protesters and abortion rights supporters. The Massachusetts law, which was instated in 2000 and revised in 2007, creates a fixed 35-foot zone around the entrances, exits and parking garages of all reproductive healthcare facilities in the Commonwealth. At many clinics, including petitioner Eleanor McCullen's "home" site of Planned Parenthood Greater Boston, the buffer zone interferes with a public sidewalk or driveway — a fact the Supreme Court overwhelming objected to.

In an unanimous ruling, the Supreme Court said the buffer zone violates First Amendment free-speech rights because it attempts to regulate access to public ways and sidewalks. These public fora, Chief Justice John Roberts writes, are not only constitutionally protected, but have also historically served as marketplaces for intersecting opinions and ideas:

It is no accident that public streets and sidewalks have developed as venues for the exchange of ideas. Even today, they remain one of the few places where a speaker can be confident that he is not simply preaching to the choir. With respect to other means of communication, an individual confronted with an uncomfortable message can always turn the page, change the channel, or leave the Web site. Not so on public streets and sidewalks. There, a listener often encounters speech he might otherwise tune out.

Although the high court realized that the state has an interest in protecting patients entering and exiting abortion clinics, the 35-foot buffer zone went too far. "The Commonwealth pursued those interests by the extreme step of closing a substantial portion of a traditional public forum to all speakers," Roberts wrote.

The Supreme Court ruling effectively reverses the decision affirmed by the First Circuit Court of Appeals, which found that the buffer zone law struck a balance between honoring free speech and protecting patient safety.

Reproductive rights supporters criticized Thursday's ruling, claiming that it disregards the needs of patients and clinic staff who face harassment and the threat of violence from disruptive sidewalk protesters on a daily basis.

"In a country where patients and doctors have endured horrific violence at the hands of what can only be called domestic terrorism, the Court’s denial of basic protection in the form of a buffer zone is unconscionable," NOW President Terry O'Neill said in a statement.

Massachusetts enacted the buffer zone law in 2000 due to increasing anti-abortion violence that targeted clinic employees, patients and their companions. In December 1994, when anti-abortion extremism was spreading throughout the country, a 23-year-old gunman shot and killed two people at two separate abortion clinics in Brookline, a Boston suburb. Five other people were injured in the attacks.

Planned Parenthood employees who worked at the Brookline clinic at the time of the shooting have said the protesters used to follow patients to the door and their cars. The protesters were so unruly prior to the buffer zone that Boston and Brookline residents would purposely avoid these sidewalks while running their weekend errands.

In an earlier interview with Bustle, NARAL Pro-Choice Massachusetts Executive Director Megan Amundson said that harassment has continued, with protesters yelling at patients and using "fire prodders to distribute literature into car windows."

Marty Walz, President and CEO of Planned Parenthood League of Massachusetts, said in an interview Thursday afternoon that she has "personally seen the buffer zone transform the area outside the health center into a safe, peaceful environment." Walz added that she has been harassed and intimidated by anti-abortion protesters after visiting the Planned Parenthood Boston clinic, and is worried about the possible ramifications of this ruling.

According to the National Abortion Federation, there have been 8 murders, 17 attempted murders, 42 bombings, 181 arsons and thousands of criminal incidents outside abortion clinics since 1977. A survey conducted in September 2013 found that 92 percent of responding facilities were concerned about the safety of their patients.

Despite evidence of anti-abortion violence, the Supreme Court was skeptical of the need for the 35-foot buffer zone, particularly in Massachusetts. The justices pointed out in their opinion that there haven't been any incidences of extreme violence at the state's clinics since the 1990s.

However, most of the justices did not agree that the buffer zone favored "biased" speech and specifically targeted anti-abortion activists — many of whom consider themselves "sidewalk counselors."

What remains to be seen is whether or not the ruling in McCullen v. Coakley will affect abortion clinics across the United States. The high court did not overturn the 2000 decision of Hill v. Colorado , which set the precedent for buffer zones around healthcare facilities. However, the buffer zone in question in the Hill case was a "floating buffer zone," banning protesters from coming within eight feet of a person. Massachusetts initially tried this type of floating buffer zone, before moving to the fixed zone in 2007.

Roger Evans, senior legal counsel for Planned Parenthood Federation of America, said Thursday that floating buffer zones will likely remain in place. However, he added that "all buffer zones are endangered species."

Here in Boston, Walz said the ruling "isn’t the end of the story." Planned Parenthood officials will continue to work with the state and "exhaust all possible options to protect public safety," Walz said.