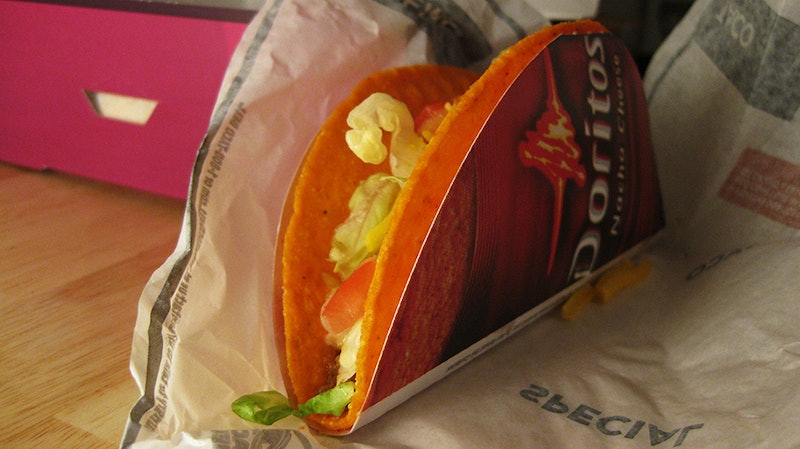 The narrative as we know it for the Doritos Locos Taco goes like this: In the years prior to Taco Bell’s 50th anniversary, the company’s CEO, Greg Creedwas, decided that the best way to celebrate would be to reinvent the crunchy taco. The Taco Bell team accordingly dreamed up 30 different product concepts — but only one of them really stood out: A taco stuffed with Taco Bell ingredients, but with a shell made out of a giant Dorito. Said Taco Bell brand marketing director Stephanie Perdue to Fast Company, “It was like, ‘Holy crap!’ Nobody had ever done this before: turning a Dorito into a taco shell. It was just mind-blowing at the idea stage.” Everything spun out from there; when the Doritos Locos Taco launched in 2012, it sold more than 100 million units in the first ten weeks alone, leading to the creation of many other varieties.

But here’s the thing: According to David Peterman, who was the vice president of new concept operations (what a job title) at Taco Bell back in the ‘90s, the idea has been around for about 20 years. “You should know that in approximately 1992, the idea of taco, toastada, and taco salad shells coated with a variety of Dorito’s flavorings from our sister company, Frito Lay, was evaluated and pursued,” Peterman wrote recently to Madrigal. “At that time, Frito Lay had recently completed a factory in Mexico that was capable of manufacturing the shells. However, Frito Lay management had no interest in producing the product and the then V.P. of Marketing at Taco Bell chose not to pursue the idea further.”

Did the portion of your brain that deals with weird ideas and bizarre fast food items just explode? Because mine did. Here, have a vintage Taco Bell commercial from Peterman’s era to get you back on track:

Anyone else miss the chihuahua? RIP, Gidget.

Oddly enough, there is a lesson to take away from this newfound knowledge. As Madrigal puts it, “None of this is to take anything away from the Doritos Locos team…. It’s just that we give way too much credit to the Big Ideas (TM), and not nearly enough to timing, execution, corporate politics, and luck.” It's not unlike the phenomenon Malcolm Gladwell wrote about in Outliers: Having the raw material isn't enough to create something huge, whether it's a genius like Bill Gates or Steve Jobs or a product like the Doritos Locos Taco. Everything has to line up juuuuuuuuuust right in order for the full potential of any given thing to be realized.

For what it’s worth, Peterman himself is still complimentary to the Doritos Locos Taco in its current form: “I give much credit to the talented folks at Taco Bell who were able to bring these excellent products to market and in particular admire their ability to successfully navigate the seas of corporate politics,” he said. Well done, Doritos Locos team. Well done, indeed.

It kind of makes you wonder whether the Waffle Taco, too, existed before it existed, doesn’t it? No? Maybe it’s just me, then…