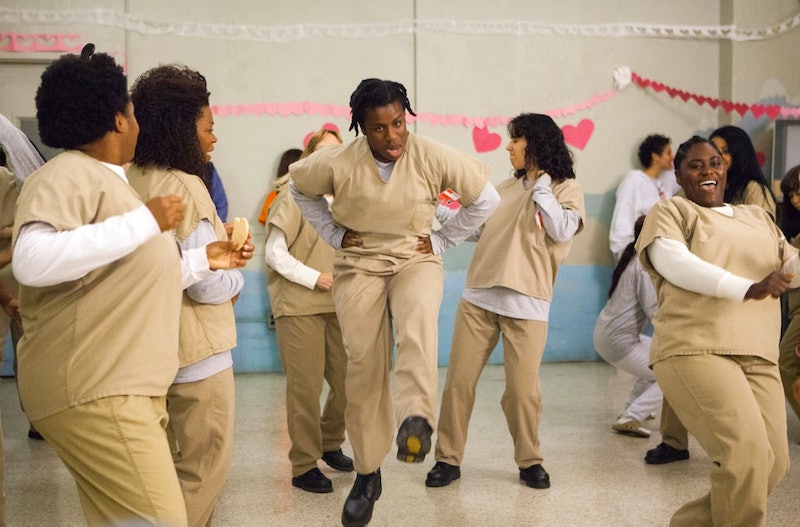 When it comes to analyzing television or film, the idea of grilling what it got "right" or "wrong" about its subject matter can get fishy. Subjectivity, creative license, and debates over what responsibility art has to sheer reality are all part of that conversation. But when it comes to Orange Is the New Black — a show centered around one of America's most thoroughly effed-up institutions — it's a question worth asking. Which is why we're so pleased Washington City Paper's Adam Dawson sat down with a woman named Susan K. — an ex-convict with a lot of opinions on what Orange Is the New Black nailed and what parts of it scream inaccuracy. It is, somewhat unsurprisingly, more of the latter.

As Susan, who served four years for armed robbery, said in her interview, "This is like one of those photo games that they have at the bar, except instead of showing you what’s different, I’m going to show you what’s total bullshit." I kind of love Susan?

What the show got wrong

All the snappy banter, especially with the guards

She's talking specifically of the scene in season two, episode one's "Thirsty Bird," where the guards find Piper's drawn a bird on the wall during her time in solitary.

I understand that they have to make the show interesting, but if a guard came in and saw that you had smeared food on the wall, they would have thrown a bucket and scrubber in and not fed you again until you cleaned that shit up.[...]This is like a scene from Blossom or something, where the guard is playing the exasperated Dad character. It’s like, 'Oh, Piper! What wacky antics have you gotten into now?'

The abundance of male guards

Another thing that’s removed from real life is all these male guards just dicking around. Not just in this particular prison, but in the whole series. The only time we saw male guards was when they came storming in wearing riot gear when they wanted to toss all the cells.

She's specifically talking about Alex going back on her word to Piper in the season two premiere and getting released. "Anyone who tells you there’s this honor code, or thinks that their homeboys won’t rat them out is in for a rude awakening."

I’m a white blonde girl who went out and willfully fucked up and committed armed robbery, and I got five years. There were tons of black girls in my prison who were holding onto a bag of dope for a couple of days, and they always seemed to get, like, 10 years. If you ever find yourself in prison and wonder why there’s tension between white and black, shit like that is probably one of the reasons.

So, could you please explain to me why this kitchen has a dozen chicks back there? Or why there’s so much cooking gear that they don’t need? Christ, it looks like the kitchen of a high-end steakhouse! Hey, look, a big assed dough mixer! For all the fresh bread that they totally make in prison all the time!

The kitchen really bothers her.

This kitchen is fucking Fantasy Island! There are a lot of things that drive me crazy about the show, but the kitchen is killing me. In the first season there always seemed to be these wooden crates loaded with fresh vegetables, like Whole Foods was catering everybody’s lockdown experience, and Star Trek [Red] was running around with a clipboard, barking orders at everybody.

Another thing: She says that Red and Gloria's conflict over who gets to "rule" the kitchen is ridiculous, as the guards would never allow any one prisoner to have so much authority.

There’s a putt-putt golf course near my house with more security than this prison.

This show we’re watching now has realistic depictions of lesbian sex, which I’m sure gets lesbians pretty psyched, but what it doesn’t do is give a realistic version of lesbian sex in prison. [...] It’s like, maybe you make out for five seconds. Maybe there are fingers involved for two seconds. It happens really fast and there’s hardly anything to it, because, as this show seems to forget, there are freaking guards and cameras everywhere, and people get time added to their sentences for shit like that. It’s a risk/reward thing.

It would probably get somebody beat up. I mean, these two are all good natured about it, like it’s a Shakespeare comedy or something. “Let us sally forth and set a contest! In which two shall seduce maidens, yet only one shall triumph! Tally ho!” But there’s jealousy and protective relationships and even kind of a sense of ownership for a lot of women in prison. But hey, whatever. This is TV. So just go ahead and scissor away in the chapel.

Nicky's entire way of being

Everything about her: her hair, her mannerisms, everything, they just do not exist in prison. In the first place, her hair would make her a target almost immediately. Secondly, her little sassy-pie routine might make for quality television, but somebody would have ripped that hair off her scalp if she talked to anyone the way she does on this show. Prison Darwinism takes care of big, bouncy hair and being a smart-ass really fast.

What the show got right

That’s actually pretty accurate. Nobody openly talked about that. But I spent about two years of my sentence doing this support group. I was assigned to it because of the heroin thing, so we would all sit around and talk about our experiences, and what we did to end up there and all that. I learned a hell of a lot, man. I mean a hell of a lot.

Specifically in scenes of group activity, like when the black girls are playing that game and Crazy Eyes is the timekeeper. "Just the loud. The yelling. Never speaking. Always yelling."

They got that particular stereotype nailed. The methed-out hillbilly. God, those girls used to just set my teeth on edge. They were this pack of barefoot morons, straight from the fucking holler, you know? And they were all super religious, except they apparently had this new chapter in the Bible that told them to hate black people. And Latinas. And oh my God, they hated the white girls who acted black.

It's worth reading Susan's entire examination of Orange Is the New Black; she has a lot to say and it's all hilarious, insightful and, you know, actually real. You can find part two of that here.

More like this
Beyoncé & Madonna’s “Break My Soul” Remix Honors A Group Of Black Icons
By Stephanie Topacio Long
Why 'Black Bird' Suspect Larry Hall Recanted His Jessica Roach Confession
By Brad Witter
The 'Black Bird' Stars Are Both Heading Back To Apple TV+
By Brad Witter
Every Horror Movie Reference In The 'PLL: Original Sin' Premiere
By Alyssa Lapid
Get Even More From Bustle — Sign Up For The Newsletter