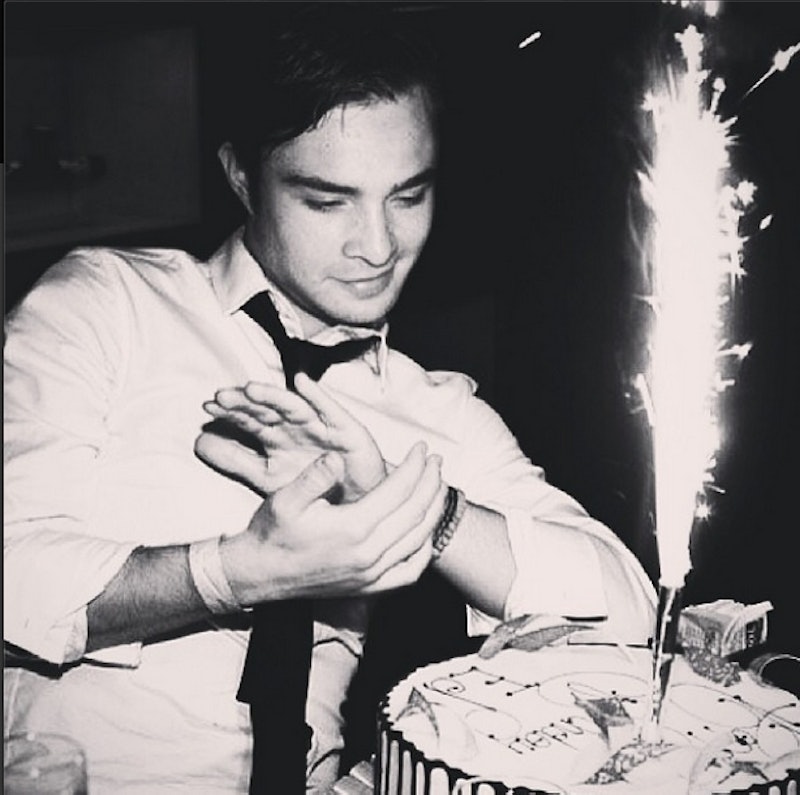 Attention, attention, Gossip Girl fans: It's Ed Westwick's 27th birthday. The actor celebrated with a cake on Thursday night, displaying a classic content yet smug Chuck Bass look in response. Even though we'll always remember him as Chuck Bass, Westwick's taken on a large number of dramatic roles since Gossip Girl ended in 2012. Most notably, he played Tybalt in the star-studded 2013 adaptation of Romeo and Juliet. Soon, he'll star alongside AnnaSophia Robb and Dianna Agron in the financial thriller A Conspiracy on Jekyll Island and join Vanessa Hudgens in the zombies and vampires comedy Kitchen Sink.

In our hearts, though, he's still Chuck Bass, though perhaps the nicer, more mature Chuck that we saw in Gossip Girl's later seasons, rather than the privileged, smug jerk that he was in Season 1. While his character evolved, one thing remained consistent: Chuck had the best lines.

On a show that was often overdramatic, predictable, and over-the-top, Chuck's wit proved a clever way to challenge the show's characters and embrace the meta-humor that so often elevated The O.C. and Gossip Girl above other teen dramas. With his silky voice and raised eyebrow, Westwick really owned the role. He turned into an unlikely heartthrob, and for good reason. To celebrate Westwick's birthday, let's revisit his best lines as Chuck.

“I plan on holding on to my youth for as long as possible.”

"My impulsive tendencies have no place in my life as a legitimate businessman.”

"Look, Serena, stop trying to pretend you're a good girl. So you slept with your best friend's boyfriend. I kind of admire you for it."

“You eat what I provide, practice what I preach and 'til I say so, the only girls you talk to are the ones I've paid for.”

"For people like us a college degree is just an accessory. Like a Malawi baby or a poodle."

“I have to object to you living in the dorms. Florescent lighting, communal showers, public school girls? There's a place for that, and that is the back of a video store.”

"Don't mock the scarf, Nathaniel. It's my signature."

"I want them young and unstable."

"There's nothing more boring than a sense of morality."

“Is being dead that much worse than being nothing?”

“I’m fine. It’s nothing that can’t be fixed with a night of scotch and perhaps a rogue socialite.”

“I don't have a romantic bone in my body.”

“Closure. The unattainable goal. In my personal experience the closest I've come to getting it is through massive amounts of hate sex. But that's just me.”

“As much as I love hearing about not needing material things from a guy with that much product in his hair, this party is about excess.”

"People like me don't write books, they're written about."

"Whoever said that money doesn’t buy happiness didn't know where to shop."

"I can tell you from experience, everyone loves a villain."

"Watching you fail spectacularly gives me so much joy."

On his role model:

"Rum runner. Womanizer. Millionaire. He was my kinda guy."

"The intricacies of our war games are too complex for a prole like you to fathom."

“Dude, I'm Chuck Bass. Even Europeans must know what that means.”

“Why should I be chosen as an usher? I’m Chuck Bass.”