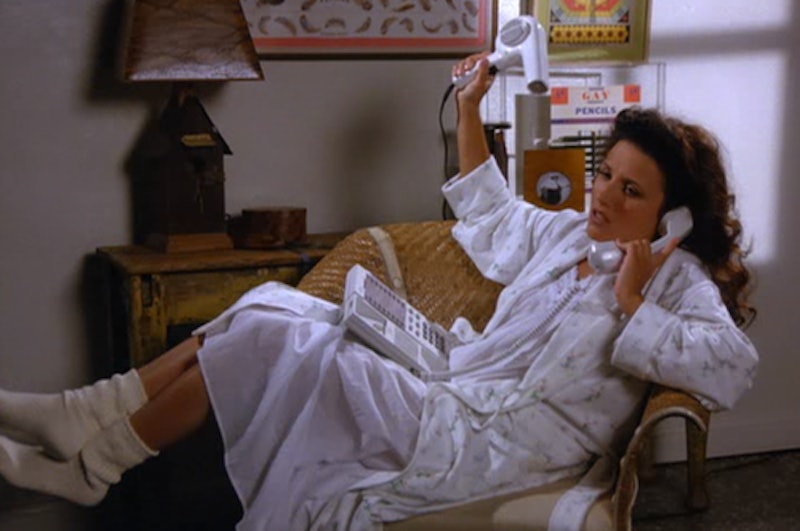 The iconic show about "nothing", Seinfeld , is celebrating its 25th anniversary with a tribute to the 25 greatest episodes, which will air on TBS. The incredibly successful, nine-season long gem of the '90s will resurface as TBS airs classic episodes including "The Chinese Restaurant," "The Puffy Shirt," "The Serenity Now," and "The Contest." Variety reports that "The Junior Mint" and "The Yada Yada" will also be in the top 25 lineup. For all the hard-core Seinfeld fans and anti-dentites, HuffPost reports a complete timeline and viewing schedule for those who need to cancel their appointments for the week of June 30 through July 5.

Seinfeld's success as one of the most beloved sitcoms of all time (and '90s time capsule) could be credited to the show's cast of quirky, likable, awful, awkward characters that are surprisingly relatable. Their dating lives are a mess, they're balding, and they were eating muffin tops before "muffin top" was co-opted as the term for the role of side fat that spill over the waistband of one's jeans. Julia Louis-Dreyfus as Elaine Benes stands out not only as the only woman among Seinfeld starring crew of lead misfits and jaded New Yorkers, but as one of the most likable, hilarious, dynamic portrayals of a woman on TV, possibly ever. She's flawed, she's neurotic, and she's our favorite.

Admit it. Deep down, we're all Elaine.

You think you're really, really good at dancing:

But you can't dance. You're terrible.

You don't waste your favorite method of birth control on just anyone:

If he's not spongeworthy, it's not happening.

When life gets you down...

Or if things are really bad...

Schnapps will do. In a pinch.

You've stopped worrying about what other people think about you:

You understand the true meaning of "fake it 'til you make it":

Because you probably came up with the phrase yourself.

Because, statistically, it's impossible.

...and are always respectful of your coworkers.

Most of the time.

You're a sociable person...

But sometimes, you just need to be alone.

You always give your honest opinion:

Even if no one really asked.

You've been known to make some weird faces:

Most of the time, you don't even realize it.

Your best friends are as weird and dorky as you are:

And you love them for it.