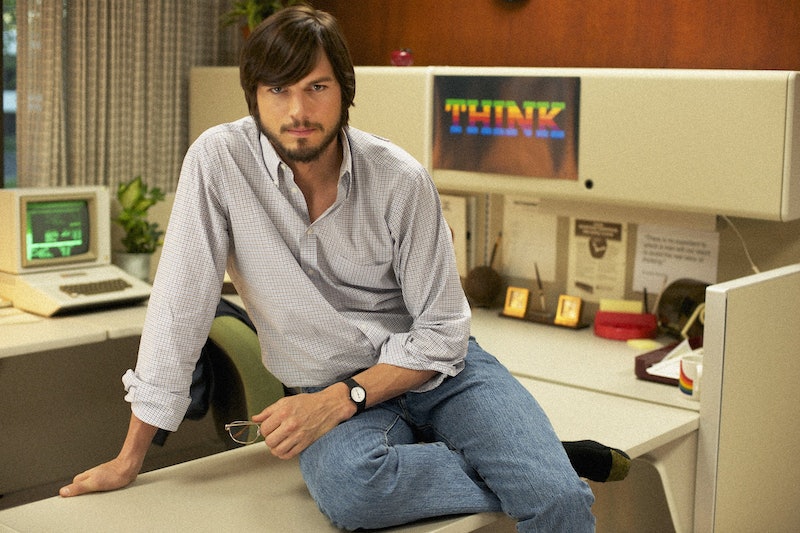 Two new clips for the upcoming Steve Jobs biopic (no, not the one from Aaron Sorkin) have been released, and they're just as impressive as a, well, Pippin. Starring Ashton Kutcher with a scruffy haircut, the Two and a Half Men actor looks like a young Jobs in the clips for JOBS, set to be released Aug. 16, but the performance just screams Kutcher.

In the first clip, Kutcher and Josh Gad (The Book of Mormon), who plays Apple co-founder Steve Wozniak, debate what to name their company. And we're left debating whether the scene was as good of an idea as a company named after Star Wars.

In the second, Kutcher reads a famous speech by Jobs over images and videos of the visionary staring at a beer bottle, slamming a phone, and frolicking through fields of grass. Here's hoping it plays better on the big screen than on our, well, Apples.

More like this
Kate Winslet To Star In Russell T Davies' 'Dark Season' Revival
By Sam Ramsden
The 'Love, Lizzo' Harry Styles Scene Is Just 1 Moment That Made Fans Feel Seen
By Brad Witter
Blake Lively's Reaction To Ryan Reynolds' Dance Video Was Pure Thirst
By Stephanie Topacio Long
'Avatar 2' Now Has A Teaser Trailer & Release Date
By Jack Irvin and Alyssa Lapid
Get Even More From Bustle — Sign Up For The Newsletter