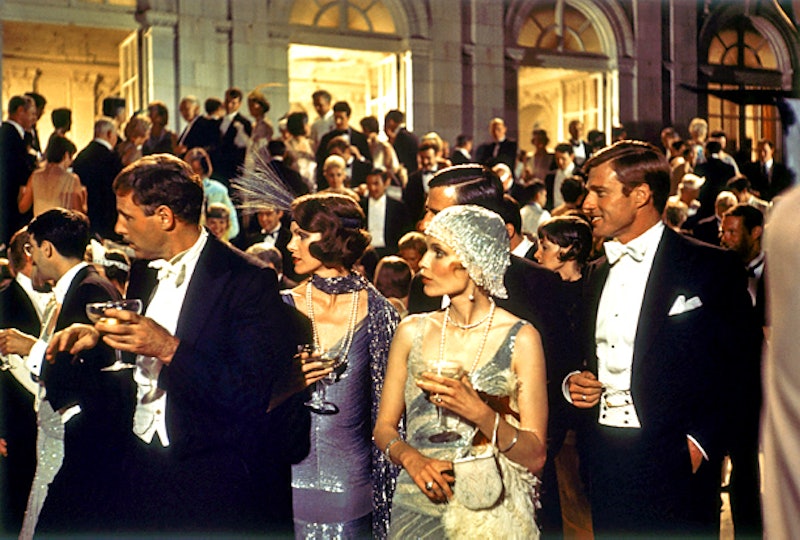 It's always a bit painful when one of your acquaintances hosts a dinner party and doesn't invite you, but come on, guys, nobody's throwing truly great parties these days. Sure, scrolling through photos of mason jars filled with spiked jalapeño lemonade that you didn't get to drink is emotionally draining, but you know what's really hard? Knowing that you weren't invited to Gatsby's Saturday night bash. Knowing that you will never be invited to Gatsby's Saturday night bash, because GATSBY IS DEAD.

See, parties in real life are fun and all, until your friend starts making out with your crush and your crush starts vomiting in the bathroom and you wake up with a hangover the likes of which hasn't been seen since the heyday of the Roman Empire. That's why parties in literature are the best parties. You can spend all night watching the glitterati waltz by, listening to the barbed compliments, and admiring the way the candles play against the buckets of champagne, but you'll wake up bright and fresh and terribly, terribly sad that none of it was real.

Here are 11 moments in literature that we desperately wish we'd been part of, no matter how badly things ended. Our invitation probably got lost in the mail. Right, Jay? Right?!

1. Every single one of Jay Gatsby's parties.

If there's one party in all of literature so huge, so magical, so weird that it makes every other feast pale in comparison, it's Saturday night at Gatsby's house. There's simply no competition. The champagne flows like water, the ladies wear fringe, and if you're lucky, you might catch a glimpse of the mysterious host himself. But probably not.

If you're looking for a handsome, wealthy husband, you've got to attend one of Austen's high-society balls. Perhaps at Netherfield? Just remember: everyone's waiting to see who you dance with, and who you snub.

3. The scandalous, vapid parties in The House of Mirth.

Sure, Edith Warton's novel mostly criticizes the New York elite who threw these endless, lavish get-togethers, but we'd like to attend just one, just once, just to see what all the fuss is (and maybe get a kiss like that at the end of the night).

Flowers and food and a deep sadness? A hostess who is "always giving parties to cover the silence”? Sounds like our type of existentially-troubled hangout.

Say what you will about the table manners at this fiesta, you can't deny that everybody is bravely, boldly, crazily themselves. What's in that tea, again?

6. Bilbo Baggins' eleventy-first birthday party in The Fellowship of the Ring.

Plenty of alcohol, a wizard doing fireworks, and the mysterious vanishing of the birthday boy at the end. So much better than our 21st.

7. The ball in The Masque of the Red Death.

Okay, we don't want to go to this party, because we don't have a death wish, geez. But the multi-colored rooms, and the costumed stranger with nothing inside his costume… we'd like to at least shiver deliciously as we held the doomed invitation in our hands. Living in the 21st century is the worst.

8. That time F. Scott Fitzgerald got way too drunk in A Moveable Feast

Any time Hemingway and Fitzgerald hang out, we want to be there, preferably clutching a gin rickey. At one point in A Moveable Feast, Fitzgerald drinks so much that he thinks he's going to die, so Hemingway fixes him a favorite cure: a whiskey sour. "You could not be angry with Scott any more than you could be angry with someone who was crazy," wrote Hemingway, affectionately-ish.

Milk laced with imaginary drugs? It's just so unbelievably creepy and stylized and surreal that we can't resist.

You thought Jay Gatsby's gatherings were wild? Gatsby's character was actually inspired by Trimalchio, a character in an ancient Latin text called the Satyricon. Trimalchio throws the world's most elaborate dinner parties, complete with live birds trapped inside eggs, dishes designed to represent Zodiac signs, and a mock funeral. We probably couldn't keep up, but we'd definitely like to try.