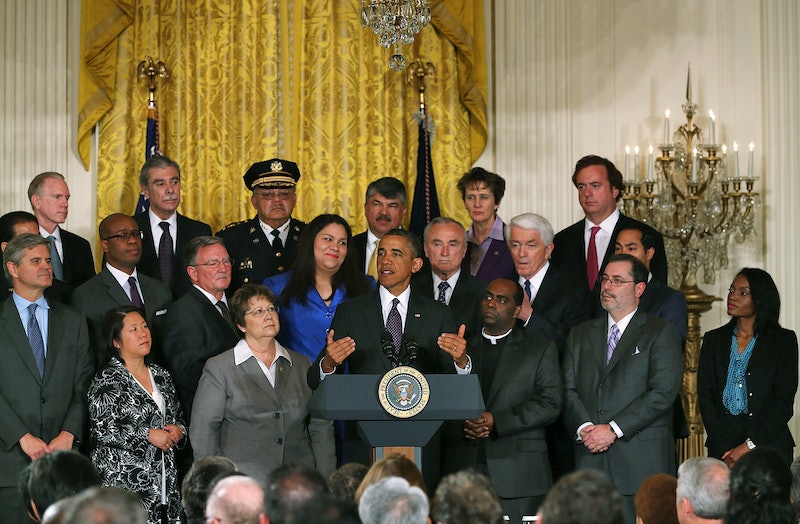 The Senate voted 82-15 to begin debate on immigration reform Tuesday, marking the launch of what's sure to be the news story of the summer, 'Legalize Me Maybe.' No, but in all seriousness, this is probably one of the most important issues our country faces, and President Obama knows it.

This morning, POTUS gave a forthright speech on immigration reform, underlining the commonsense nature of the “Gang of Eight” bill and arguing that there's no reason why it shouldn’t pass by this summer’s end. Here's a breakdown of exactly what you need to know from the speech:

Obama’s speech came before the Senate casts its first votes on the immigration bill later today and also as House Speaker John Boehner says there’s a good chance an immigration bill will pass "by the end of the year."

More like this
Iran Has Issued A Death Sentence Over Mahsa Amini Protests
By Catharina Cheung, Darshita Goyal and Maxine Harrison
Joe Lycett Just Took HIs David Beckham Qatar Protest To A Whole New Level
By Sophie McEvoy
Footballer Jake Daniels Shared His Thoughts On A World Cup Boycott
By Sam Ramsden
TikTok's "Damp" Lifestyle Is All About Mindful Drinking
By Carolyn Steber
Get Even More From Bustle — Sign Up For The Newsletter