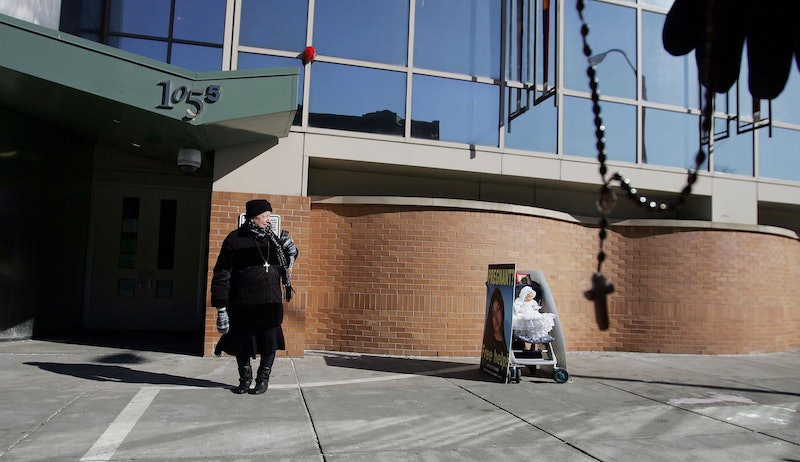 At 11 a.m. Saturday, about 40 anti-abortion protesters remained on the sidewalk outside the Planned Parenthood clinic in Boston. Some camped out in lawn chairs, wearing visors and wide-brimmed hats, while others kneeled as they prayed the rosary. A group of children and teens in matching "Stop Abortion Now" T-shirts held colorful hand-drawn posters depicting aborted fetuses. As six Boston police officers patrolled the sidewalk, a man crossed over the yellow line that once established a protest-free buffer zone. Just two days after the Supreme Court struck down the buffer zone law, the man was free to pass.

Now that the Supreme Court has overturned a 2007 Massachusetts law mandating fixed 35-foot buffer zones at reproductive healthcare facilities throughout the Commonwealth, clinic officials are preparing for the worst: larger protests, increased harassment and more pressing threats of violence. "The Supreme Court [took] away an essential measure to protect public safety and healthcare access in our state," Planned Parenthood League of Massachusetts CEO Marty Walz said Thursday in a teleconference.

As anti-abortion opponents inch closer to clinic doors, Planned Parenthood and local police departments have begun taking measures to heighten security and create a less-hostile environment for patients and their companions. These measures include expanding the Planned Parenthood corps of volunteer clinic escorts and increasing the presence of law enforcement officers.

"We have officers up here to make sure our city ordinances are being enforced in both directions," Boston Police Captain Wayne Lanchester told The Boston Globe. "There's more interest with the decision, and we understand that."

In an unanimous ruling, the Supreme Court struck down the buffer zone law because it infringed on First Amendment free-speech rights. The law created protest-free zones on public sidewalks and ways — places that "have developed as venues for the exchange of ideas," Roberts wrote in the opinion.

However, the justices did not explicitly repeal the decision of Hill v. Colorado, a 2000 case that set the precedent for buffer zones outside healthcare facilities. The buffer zones in Hill were floating, or "bubble" zones, prohibiting protesters from coming within eight feet of a person without their consent. Massachusetts tried the floating buffer zone in 2000, but revised the law in 2007 after state and clinic officials found it to be inadequate.

For now, it's unclear whether floating buffer zones are also in danger of becoming outlawed. Roger Evans, senior legal counsel for Planned Parenthood Federation of America, said in an interview that "any buffer zone in place by legislation, as opposed to court order injunction, and restricts speech in a public way" could be vulnerable. "If you were a betting man, you would bet that they'll all go," he said.

While clinic and law enforcement officials are currently taking action on the ground, state officials are still mulling over their legal options. "We are reviewing additional options to enhance those protections [for women], while respecting the standards laid out in yesterday’s court ruling," Massachusetts Attorney General Martha Coakley said in a statement.

Coakley added that women seeking abortions, as well as clinic staff, still have legal protections, including the Massachusetts Civil Rights Act, which bars the use of threats, intimidation or coercion when exercising a constitutionally protected right. The federal Freedom of Access to Clinic Entrances Act (FACE) also prohibits blocking or impeding access to an abortion clinic through the use of force.

Walz said in the teleconference that they are looking into FACE and similar laws to determine the best course of action going forward.