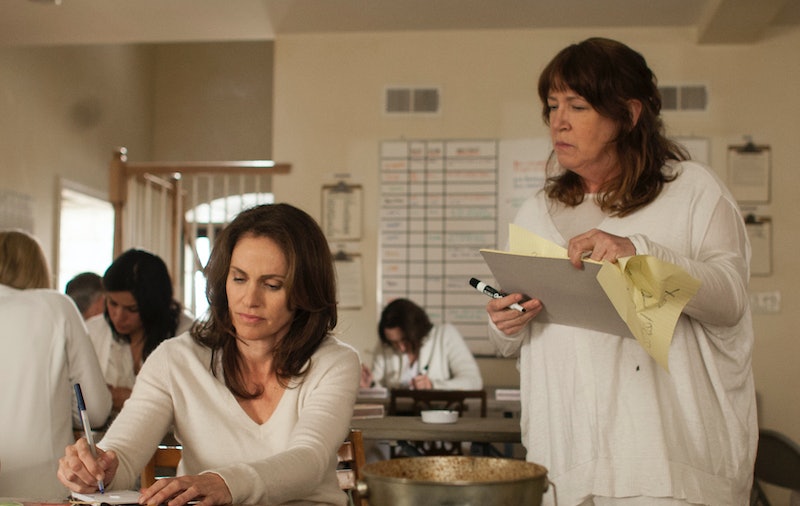 It wasn't enough to know that HBO's The Leftovers was about a rapture-esque event that wasn't quite about the rapture. Now, we've got a cult-like organization (called The Guilty Remnant) that might not quite be a cult. And because Tom Perrotta's books has answers in the form of source material, we won't have to wait through episodes upon episodes to figure out what the point of these white-sweatshirt-loving, chain-smoking, monk-like-oath-taking believers are about.

When we meet Amy Brenneman's character on HBO's The Leftovers, she's one of many white-garment-clad folks waking up in a communal bedroom, eating slop out of a communal kitchen, chain-smoking, and agreeing to stalk average people with what we can only assume are hopes of recruitment. But what is this cult — or emphatic organization — really all about?

First, the GR is just one of many reactions to the "rapture." The point of The Leftovers is examining the varying ways in which humans react to an inexplicable event in which two percent of the world's population disappears in seconds. Some people react by checking out, a few pretend nothing has changed, and the GR takes a vastly different approach.

What's With The Cigarettes?

"We smoke to proclaim our faith," goes the GR's slogan. Much like the vow of silence or the white clothing, the cigarettes are just a piece of this complicated puzzle. According to an interview with Perrotta in support of The Leftovers book release, the cigarettes are "a declaration of faith and a sense that they have that there's no future and they don't have to worry about their health."

So Why Do They Stalk People?

The point of stalking those people who remained after the "rapture" is to recruit them to the GR's cause. The continued contact eventually wears potential recruits down.

Why Don't They Speak?

Part of their mission or faith is that they take a vow of silence. It makes sense when you add it to their non-violent protests.

But What's The Point of All This?

Again, according to Perrotta, the Guilty Remnant "see themselves as living reminders. They see themselves as bearing witness, and there is this guilty sense — they believe that they were rejected by God." The GR is an expression of the mania produced by people simply disappearing into the ether. Of course, there is a little more to the GR, but we'll leave at least a bit of that up to the storytelling geniuses behind the TV version of The Leftovers.

More like this
‘Squid Game’ Creator Hwang Dong-Hyuk Just Dropped A Major Season 2 Tease
By Brian Anthony Hernandez and Bustle Editors
Everything To Know About 'Evil' Season 4
By Meguire Hennes
The 'PLL: Original Sin' Season Finale Finally Revealed A’s Identity
By Alyssa Lapid and Kadin Burnett
‘The Simpsons’ Will *Finally* Address How They “Predict The Future”
By Sam Ramsden
Get Even More From Bustle — Sign Up For The Newsletter