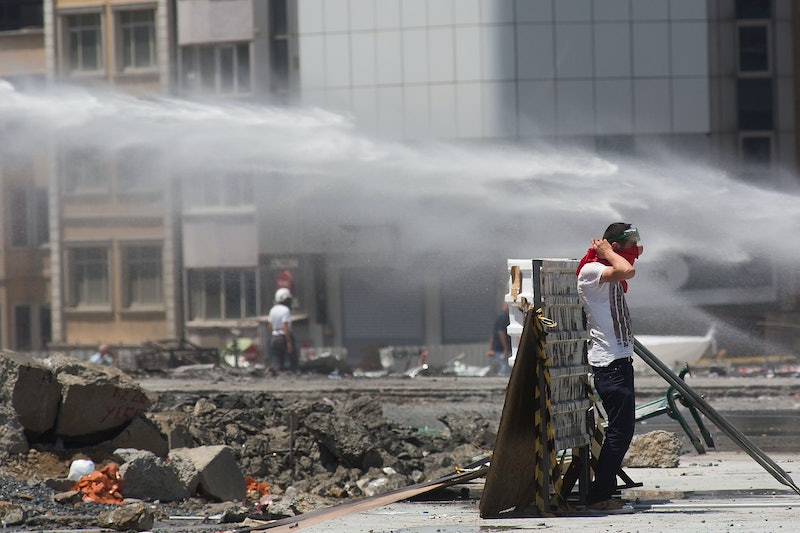 Tear-gas and water cannon-wielding riot police continued to face off with anti-government protesters in Istanbul’s Taksim Square Tuesday, despite news that Prime Minister Recep Tayyip Ergodan has agreed to meet with opposition organizers.

Deputy Prime Minister Bulent Arnic said the organizers "will be briefed on the facts and our prime minister will listen to their thoughts."

Most external critics do not seem to think the “facts,” have changed much – the proposed renovation of Gezi Park that launched the unrest is set to continue as planned, and the administration has warned their patience runs low for the “looters” and “illegal demostrators” who continue to turn out in many of Turkey’s major cities. Since May 31, three people have died and nearly 5,000 have been injured.

Demonstrators inside Gezi park have begun trying to distance themselves from the violence, claiming that television footage of molotov-cocktail-throwing protestors was purposefully provoked by police.

Istanbul's governor rejected those accusations on Twitter early this morning, with a Tweet claiming that police were only there to remove banners hanging on adjoining buildings and “had no intention to clear the park.”

Professed "intentions" aside, authorities do want the park cleared by the weekend: "I am sorry but Gezi Park is for taking promenades, not for occupation," Ergodan said.