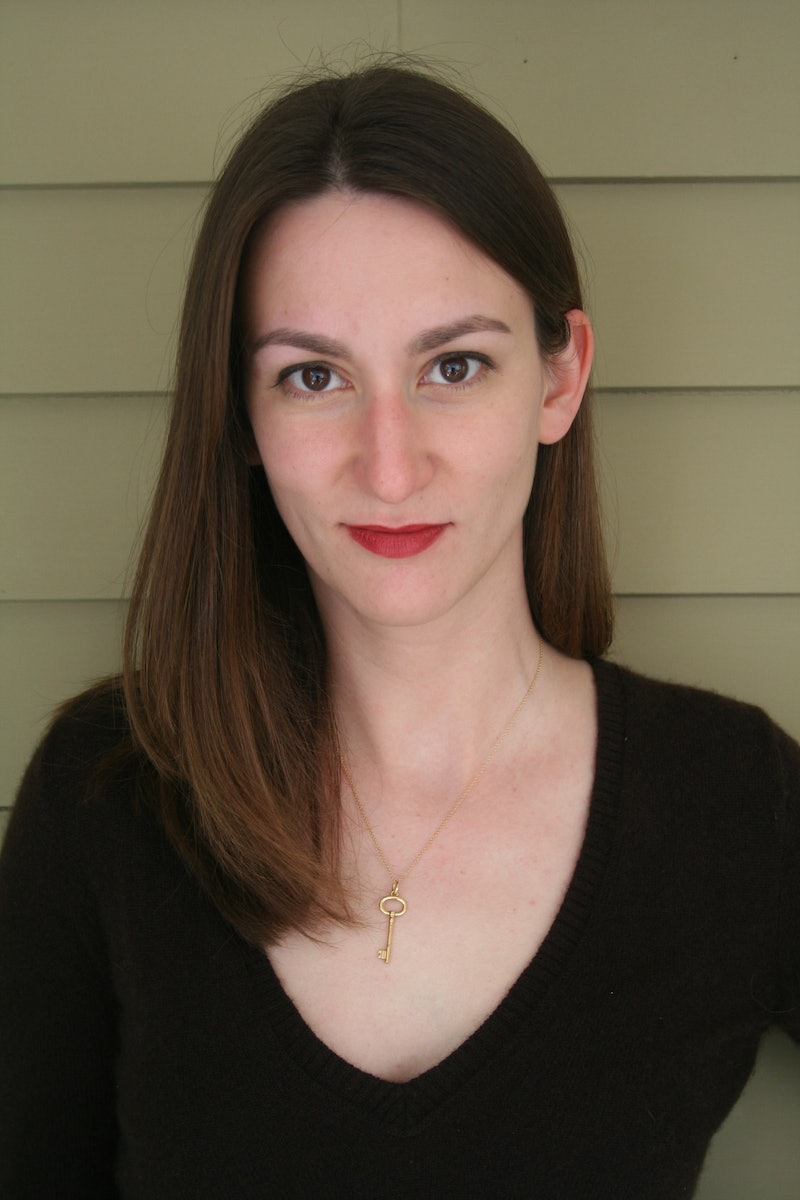 As a descendant of three accused witches, novelist Katherine Howe draws a lot of inspiration for her work from the Salem Witch Trials. Howe's first novel, The Physick Book of Deliverance Dane , tells a historical fiction tale of one of the accused witches. Her latest novel, Conversion (Putnam Juvenile), instead gives a voice to one of young girls doing the accusing.

Conversion is told from two timelines: teenage girls suffering what can only be described as mass hysteria in Danvers, Mass., a story based in real events, and the story of one of the young girls who accused her community members of witchcraft, as she confesses to a reverend in Salem in 1706.

This period in colonial Massachusetts, from 1692 to 1692, is not an anomaly — either in the past or even in modern day. Howe talked with me about the echoes we can still see of Salem is current day United States, what that means for adolescent girls, and what exactly happened to the teenagers in Le Roy, N.Y.

BUSTLE: The Salem Witch Trials have really influenced your literary career, with Conversion and The Physick Book of Deliverance Dane. What compels you about this period of history?

KATHERINE HOWE: It's an old chestnut to say "the past is a foreign country," but it's absolutely true. One of the things that really interests me about writing about the 17th century is that it is just such a completely different mindset from our own. And I think particularly — this is kind of a sweeping generalization — but oftentimes in American culture, because our culture is so young, that we look to the colonial period for our foundation myths. We are trying to cobble together a common past and a common narrative and one of the ways we do that is subscribing to these sweeping myths about why North America was colonized in the first place. And those myths have to do with religious freedom and the search for toleration, things like that. It's interesting to me that we look to these people to serve such a heavy symbolic weight for us. But actually, they're just normal, everyday people who are just trying to make it through the day.

One of the things that's so chilling about Salem is that, for that time period, everything was done right.

For Salem specifically, I'm of the opinion that one of the reasons we can never let it go, or we can never get over it really, is because it is such a corrective to those kinds of myths that we hold so dear. Part of our ideology is that we are tolerant and that we embrace differences, we are religious, we are rational. Salem really forces us to grapple with the fact that that is a fragile set of ideals. One of the things that's so chilling about Salem is that, for that time period, everything was done right. It was legal; it was legit; it was enacted by the state. They used legal precedents…

Generally speaking, this was a case where they followed everything by the book and it was still a tremendous miscarriage of justice. That's one of the reasons that we as a community just can't get over it. It's like a pebble in our shoe. Every time we try to take a step forward, we are reminded how easily our ideals fail us.

It's interesting that you bring up the notion of the past as a foreign country, because what you seem to be doing, I think, in Conversion is to discuss how easily these things can happen again. When did you come across the story of the girls in Le Roy, N.Y.? Why do you think it stuck with you so powerfully?

I was living in upstate New York myself, and I was teaching a class in historical fiction at Cornell. I was following the Le Roy story, it was very widely covered…People often ask authors, "Where do you get your ideas?" This one, for me, is decidedly unglamorous. I was waiting in a Meineke, something was wrong with my car, and they had these local cable news feeds going on the TV. And up until that point there had been all these different theories that had been advanced as to what was happening with these girls upstate. They thought it was a reaction to Gardasil, they thought it was a reaction to pollution — all these different things. And then I was sort of half listening the TV when the announcer comes on and said, "Well the answer is finally here as to what is going on with the girls in Le Roy, New York and it's conversion disorder," and he just cuts to something else, and I'm thinking, "What?!"

Conversion disorder is when you are under so much stress that your body "converts" it — scare quotes — into physical symptoms. And when it happens in a group the term for that is mass psychogenic illness. But the term we're more familiar with, the term that's an old-fashioned Freudian term is "hysteria."

In effect, officially, there was a hysteria outbreak about an hour away from me.

I went to my class, and in that class I was teaching The Crucible. It was a class on historical fiction, and one of the hypothesis of the class was how fiction can change or morph the way we understand a given historical period. Which is something if you read Conversion is a theme that comes up there as well.

In effect, officially, there was a hysteria outbreak about an hour away from me.

So I walked into my classroom and I said, "You guys this is crazy, we have to talk about this!" And what was funny was my students for the most part, didn't really see a connection. They thought the behavior of the adolescent girls in Salem were different because those people were just crazy, whereas the symptoms of the girls in the present were really happening. I'm not a psychologist, and I'm not qualified to try to reverse diagnose a psychological condition for people in the past, especially because they had a very different sense of self than people today. That being said, there are many things in common between the two incidences.

It was really striking to me that it's so much easier, in many respects, to be an adolescent girl today; we have a greater life expectancy, we can take antibiotics, vote, we have instant brownie mix — life is pretty good. But it was really striking and moving to me where here is a case where, for whatever reason, being an adolescent girl is so stressful their bodies are actually breaking down because of it. I think it was an interesting opportunity to have a conversation as to why that would be a case.

The Salem Witch trials have been coming up a lot in pop culture, with the TV show Salem, and even American Horror Story Coven, and an upcoming show from Orange is the New Black creator focusing on that time period. What about now, present day, do you think makes it such a time where this period of history is resonating?

I think one of the reasons that witches are always interesting and enticing, honestly, I think part of it has to do with gender politics. It's true that most witches in the past — and I mean people accused of being witches — were women. That representation has persisted in our popular culture. Generally speaking, witchcraft is thought to have an ineffable connection to what makes women scary. To female power or to female potential … Beyond that it's hard to say. What do you think it is?

Generally speaking, witchcraft is thought to have an ineffable connection to what makes women scary.

Well, what you just said really hit me. The Salem Witch Trials are often taken as an example of anti-feminism at work, because, as you said, it was the outsider women, the ones problematic in society, who were accused. But, on the other hand, they're being accused by the hands of young girls who had all the power. It's an almost entirely female-centric event in our history.

Yes, and there's another layer of involvement for women, too. And that is, if a woman was accused by the group of mostly girls who were afflicted, she might then have her body searched for a tell-tale mark, and the people searching her body would also be women, of the same age and the general class background.

I think it's pretty frequent that we see Salem held up as an example of anti-feminism, but it is perhaps more accurate to look at it as an example of the kinds of risks women pose to each other.

Do you think that risk is still something that is in play in the modern day, in general?

I do think that within women's relationships there is a kind of anxiety or tension that can appear. It often shows its face in high school and in junior high. I don't know who coined the term "frenemy" but I think it's a brilliant term. I have Colleen reflect on this to some degree. She knows how she is supposed to be with her friends, but she doesn't know what to do with the aggression, the hostility, the anger that she sometimes feels. Because our culture tells women — especially young women — that they are under no circumstances to feel angry or aggressive or competitive with each other. They are supposed to be nice and sweet and supportive and positive. And all of those things are great ways to be, but it's worthwhile to think about the fact that women are aggressive, women do get angry, women do have ambition. If our culture were such that those feelings could be expressed, I feel like we might have less of this sort of hyper-intense experience within friendships that girls have.

What's next for you? Any details on the Conversion movie?

I'm told I'm sworn to secrecy on that score, which makes me so sad because the only thing I can say is it's really hard to type with my fingers crossed all the time.

Right now, I'm nearing the end of the draft of another young adult novel, which will come from Penguin Teen probably next summer. It is a love story set in contemporary New York City. Boy meets girl, boy falls in love with girl, boy discovers that girls has terrible secret and they sort of have to solve a crime. The working title is The Appearance of Annie van Sinderen . ... After that we'll see where we are. I have an idea for what will come after that, but it's still in the mush phase.

Does The Appearance of Annie van Sinderen have ties in historical fiction?

It does! As is typical of me, I like to write stories in two timelines. Most of it will take place in the present, but there will be a backstory, and the backstory will be New York in around 1895. I'm going in a slightly different direction here, but I think it will be a lot of fun.