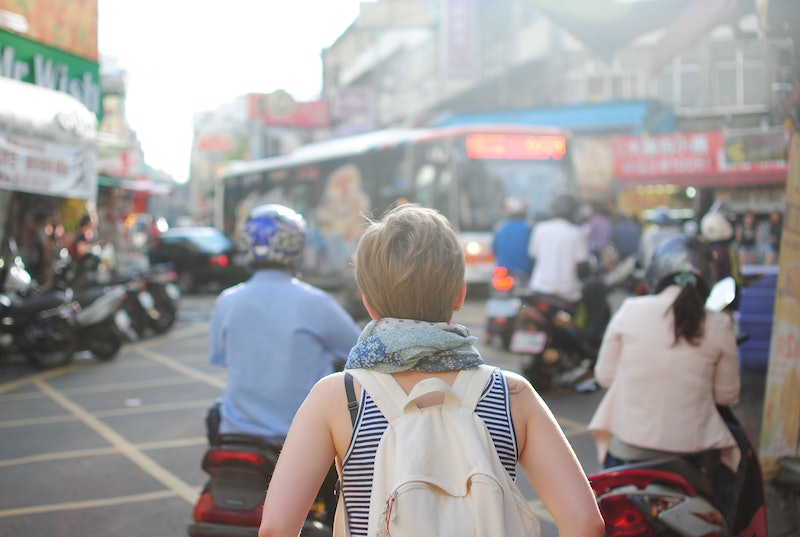 Popular career advice for the millennial generation usually goes something like this: Follow your dreams, pursue your passion, shoot for that one special star. (Oh, and, um, the recession will only make you stronger.) But what if you don't even know what your dream is?

For every impressive teen entrepreneur, there are thousands of 20-somethings floundering for a defining passion, or questioning why it is they are required to have one in the first place. After all, figuring out what to do with your life is an even trickier question nowadays, because the job market is less oriented towards a single passionate lifelong career. The idea of the stable rise 'up the job ladder' is increasingly splitting into a complex latticework of freelance work, temping, job shares, diverse income streams, and frequent career changes. Young people entering the job market are now likely to have 2 or 3 careers over their lifetime.

While we're still fascinated by the young world-changers who can barely grow stubble and the 60-year-olds who realize their 'true passion' is to raise alpacas/grow wine/renovate houses in France, the concept of a single dream is beginning to look both difficult and oddly obsolete.

Fortunately, for a very long time, wise people have been contemplating what it means to find a direction in life, how that relates to earning money, and what having dreams in itself actually entails. If you're feeling directionless, then here are 17 of the best pieces of advice for you.

On looking to your past for help:

Sir Terry Pratchett, writer of the beloved Discworld series, is certainly no stranger to success. This encouragement to base your search for direction on reflections about where you are, and where you came from, is certainly a powerful idea.

"A man is a success if he gets up in the morning and goes to bed at night, and in between he does what he wants to do."

It's a simple idea, but more difficult than it sounds. If you're worried about 'success,' keep this Bob Dylan quote in mind, and remember that real success is about following your instincts.

"Why can’t I try on different lives, like dresses, to see which one fits me and is most becoming?"

Sylvia Plath is a tragic figure, but she was highly perceptive, and The Bell Jar is a classic read for the young and unanchored. Experimenting with different ideas and job paths are all part of an important process.

On discovering what you really love:

"There is only one thing you should do. Go into yourself. Find out the reason that commands you [to do a thing]... see whether it has spread its roots into the very depths of your heart; confess to yourself whether you would have to die if you were forbidden [to do it]... This most of all: ask yourself in the most silent hour of your night: must I? Dig into yourself for a deep answer. And if this answer rings out in assent, if you meet this solemn question with a strong, simple "I must", then build your life in accordance with this necessity; your whole life, even into its humblest and most indifferent hour, must become a sign and witness to this impulse." (Letters To A Young Poet)

This Rainer Marie Rilke quote, from his first letter to an aspiring poet (age 19), is actually about the passion to write, but can be applied to defining any deep hunger. It may have hard consequences — what you think you love may look flimsy against this test — but introspection is a valuable tool.

On parents' usefulness (or lack thereof):

"Parents can only give advice or put them on the right paths, but the final forming of a person's character lies in their own hands." (The Diary Of A Young Girl)

Anne Frank got the parenting dilemma just right. While parents and family can try to help, ultimately they can't — and shouldn't — make your choices for you.

On the terror and pleasure of finding your way:

"You have brains in your head. You have feet in your shoes. You can steer yourself in any direction you choose. You're on your own, and you know what you know. And you are the guy who'll decide where to go." (Oh, The Places You'll Go!)

One of the most famous of Dr Seuss's books, Oh, The Places You'll Go! is a firm favorite for drifting graduates because it's such an effective metaphor for journeys of discovery. It emphasizes that while this is a terrifying time, it can also be empowering and fun.

"Do not be too timid and squeamish about your actions. All life is an experiment."

Ralph Waldo Emerson's advice may not appeal to those who like to look before they leap, but often, the only way to see whether a direction really suits you is to jump right in.

"I am glad that I paid so little attention to good advice; had I abided by it I might have been saved from some of my most valuable mistakes."

This tongue-in-cheek statement from Edna St Vincent Millay is meant to be taken with a grain of salt, but it incorporates two interesting ideas: That you aren't required to take every piece of career advice offered to you, no matter how sensible, and that mistaken choices can be valuable, not life-ending.

“Taking a new step, uttering a new word, is what people fear most." (Crime and Punishment)

This quote, from the notably gloomy Russian writer Fyodor Dostoyevsky, is actually a pretty helpful tip for those who are trying a new or scandalously different path in life: The first step is often the hardest bit.

"The arts are not a way to make a living. They are a very human way of making life more bearable. Practicing an art, no matter how well or badly, is a way to make your soul grow, for heaven’s sake... Do it as well as you possibly can. You will get an enormous reward. You will have created something."

American author Kurt Vonnegut certainly knew that creating something, no matter how small or illusory, is valuable — and that it's very possible to have a creative life outside of whatever you do to earn money.

“Sometimes fate is like a small sandstorm that keeps changing directions. You change direction but the sandstorm chases you. You turn again, but the storm adjusts. Over and over you play this out, like some ominous dance with death just before dawn. Why? Because this storm isn't something that blew in from far away, something that has nothing to do with you. This storm is you. Something inside of you. So all you can do is give in to it, step right inside the storm, closing your eyes and plugging up your ears so the sand doesn't get in, and walk through it, step by step." (Kafka on the Shore)

Writer Haruki Murakami is one of the most rigorously disciplined artists on the planet, but that doesn't mean he's not familiar with feeling lost or rudderless. This feeling, as he points out in his novel Kafka on the Shore , often doesn't have to do with outside factors — it's internal, and the only way to escape it is to push through it.

"One isn't necessarily born with courage, but one is born with potential. Without courage, we cannot practice any other virtue with consistency."

Maya Angelou went through many incarnations before she became an internationally-beloved writer, including single mother and exotic dancer, but she was always an advocate of the value and necessity of bravery. Everybody telling you to embrace your potential? Focus on being courageous, instead.

American poet Walt Whitman's quote from his epic Leaves of Grass is a good one to keep in mind for those who seem to have conflicting ideas. Love law, travel, and gardening? Whitman says to embrace the uncertainty — and to accept that you may not have just one ruling passion in your life.

On what the world owes you:

"The universe is not required to be in perfect harmony with human ambition."

If your lack of direction is leaving you frustrated, your first few forays have ended in disappointment, or your hard-won passion actually turns out to be a dud, remember this wisdom from scientist and writer Carl Sagan. Even pursuing something ardently doesn't mean it will automatically turn out for the best. And that's ok.

“I tell my students, 'When you get these jobs that you have been so brilliantly trained for, just remember that your real job is that if you are free, you need to free somebody else. If you have some power, then your job is to empower somebody else. This is not just a grab-bag candy game.'”

Toni Morrison's advice to her students is powerful stuff: You can't look at success as beating your peers to a prize, but rather should think about crafting a life that makes the world better.

"It is not our purpose to become each other; it is to recognize each other, to learn to see the other and honor him for what he is."

It can be a great temptation to model your life path after a hero, or compare yourself unfavorably with peers who seem to have it all sorted out; but German author Hermann Hesse will try to make you think better of it.

"My life has no purpose, no direction, no aim, no meaning, and yet I'm happy. I can't figure it out. What am I doing right?"

Charles M. Schultz wrote Charlie Brown comics happily till his death, and his group of neurotic, lovelorn, and eccentric characters went through most of life's problems — including the search for a grand direction. And as he points out here, sometimes you just don't need one.