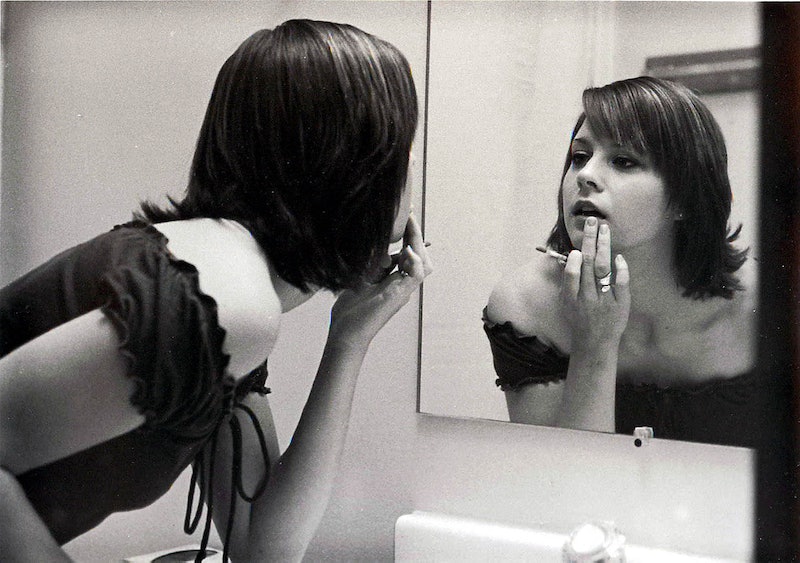 It’s that time again! What time, you ask? No, not time to get back to work (although that’s probably also true). No, not Monday, either (accurate, as well). It’s time for another look into the ever-popular “how men really feel about makeup” issue. Online dating site Zoosk recently conducted a study examining that very issue; the results, however, are a little surprising — and also a little problematic.

Zoosk started by analyzing 1,200 profile photos of female users. Then, they correlated the types of makeup worn in those photos to the preferences displayed towards them by male users. Contrary to the oft-touted opinion that dudes prefer women without makeup, Zoosk actually found that women who wore makeup in their profiles received quite a few more messages than those who didn’t — three times as many, to be exact. Here are the salient points in a nutshell:

Of course, what we don’t know is how heavy the makeup that garnered the extra attention in the profile pics was. By “eye makeup,” do we mean no-makeup makeup, or do we mean a smoky eye, winged liner, and/or some other more dramatic type of look? By “lipstick,” so we mean “my lips but better,” or fire engine red? As our very own Brinton Parker found in both of her beauty experiments, how much makeup someone is perceived as wearing versus how much that person is wearing is often quite different — as is the behavior displayed towards the makeup-wearer. As the Tinder experiment in particular found, it’s not just the amount of messages that changes depending on how much makeup you wear, but the quality of the messages, as well.

I’ve got also some questions about how the makeup data was gathered in the first place: Did Zoosk get in touch with the owners of each and every profile pic they analyzed, asking how much makeup they were wearing? This seems unlikely to me, as they used 1,200 photos (that’s a lot of reaching out). This is pure speculation on my part, so of course I could be wrong — but I’m assuming this means that the profile photos used in the study were pretty much lumped into two categories, either “makeup” or “no makeup,” based on what the human eyes who found the photos in the first place could detect. As such, it’s quite possible that “no makeup” photos included a bunch of images with makeup — just makeup of the “no-makeup makeup” variety intended to enhance a person’s natural look without transforming them into a totally different person. Something tells me we’d need to get a little more in-depth with this type of study to make it as error-proof as possible.

The bottom line, though, is this: Who cares? If a guy (or a woman, for that matter) gets down on you for what you wear, how you wear it, or what you don’t wear, then they’re probably not the kind of person you want to spend time with, anyway. As Molly Mulshine at BetaBeat put it, “We’ll start following advice like this when men start, say, getting pedicures to tame their gnarly hobbit feet, or NOT shaving the perfect five-o’clock-shadow we’ve been begging them to keep…. It’s your face. Do whatever you want with it.” Ayyyyyyy-men.