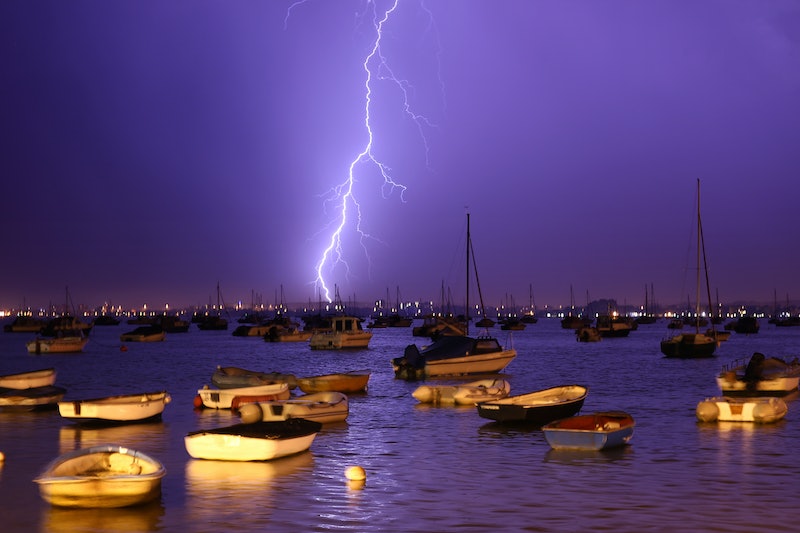 Did you know every person killed by lightning in the United States this year has been male? Mother Nature's bolts of electricity have left seven dead, and strangely, lightning strikes men way more frequently than women. The reason? Men are more likely to engage in outdoor activities, and much less likely to heed warnings that lightning kills.

In the past eight years, an astounding 80 percent of those killed by lightning strikes have been men. And according to the U.S. Centers for Disease Control and Prevention, lightning has killed more men than women every single year since 1968. And while awareness of the dangers associated with lightning have greatly decreased fatalities, men are still in the higher risk group.

The National Oceanic and Atmospheric Administration has provided a partial explanation for this discrepancy in a recent study that examined the main activities people were engaged in when struck by lightning. Topping the list was fishing, which led to 26 of the 238 deaths that occurred between 2006 and 2012. Also among the culprits were such sports as soccer and golf, and other recreational activities like camping and boating.

And who are the most common participants in these activities? Men, it would seem. According to the Morgantown Dominion Post, a local paper in West Virginia, "men fish more days a year than women." Moreover, the Post claims that "fishing was a more important part of a man’s life than a woman’s life, and a man’s friendships focused more on fishing than a women’s friendships."

As for golf, men make up 80 percent of both the viewing audience and the sport's participants in the United States, according to the New York Times, and even seemingly more gender-neutral activities like camping tend to attract more men than women.

According to John Jensenius, a National Weather Service lightning safety specialist, these activities are so dangerous during storms because they often make it difficult for participants to get to safety. Said Jensenius, “People often wait far too long to head to safety when a storm is approaching, and that puts them in a dangerous and potentially deadly situation.”

So not only do men have more dangerous hobbies, but it also seems that they ignore many of the warning signs of an approaching storm, like, you know, dark clouds, thunder, or rain. While sudden onset storms are certainly a prevalent problem in some lightning deaths, others are entirely avoidable if safety measures are taken.

What To Do If One's Coming Your Way

For example, many believe that thunder, one of the earliest warning signs of an impending storm, does not necessarily carry an immediate threat with it. But lightning is capable of striking from up to 10 miles away, which means that at the first indications of a thunderstorm, you should be making moves to head inside.

Moreover, if lightning is in the area, the NOAA suggests that people should stay indoors for at least half an hour to ensure that the storm has passed, rather than immediately heading back out as soon as the skies seem to have cleared.

But men, believing themselves immune to the dangers of electricity, are, as Jensenius' study describes, "unwilling to be inconvenienced by the threat of lightning... [and] don't react quickly to the lightning threat." Of course, the great inconvenience in this situation becomes death.

In general, the best precaution to take in order to avoid being struck by lightning is simply to read the weather and pay attention to the signs. If storms are gathering, don't go on a 20 mile bike ride, or saunter over to the 14th hole, or take your boat out for a quick spin. The majority of accidents happen when individuals are simply too far away to reach safety in a timely manner, and are stranded in dangerous situations.

If a hazardous weather outlook warning has been issued, ladies and particularly gentlemen, don't think yourself to be immune to a lightning strike. You're not. Just stay inside. Go fishing another day.

More like this
Michigan’s Governor Is “Going To Fight Like Hell” To Protect Abortion Access
By Andrea Zelinski
What To Know About Taking More Than 1 Piriteze Per Day
By Bustle UK
Kate Middleton Is Hiring A New Assistant & The Job Description Is Very Specific
By Sam Ramsden
The 6 Best Balaclavas To Keep Your Face, Head & Neck Comfortably Warm
By Jenny White
Get Even More From Bustle — Sign Up For The Newsletter