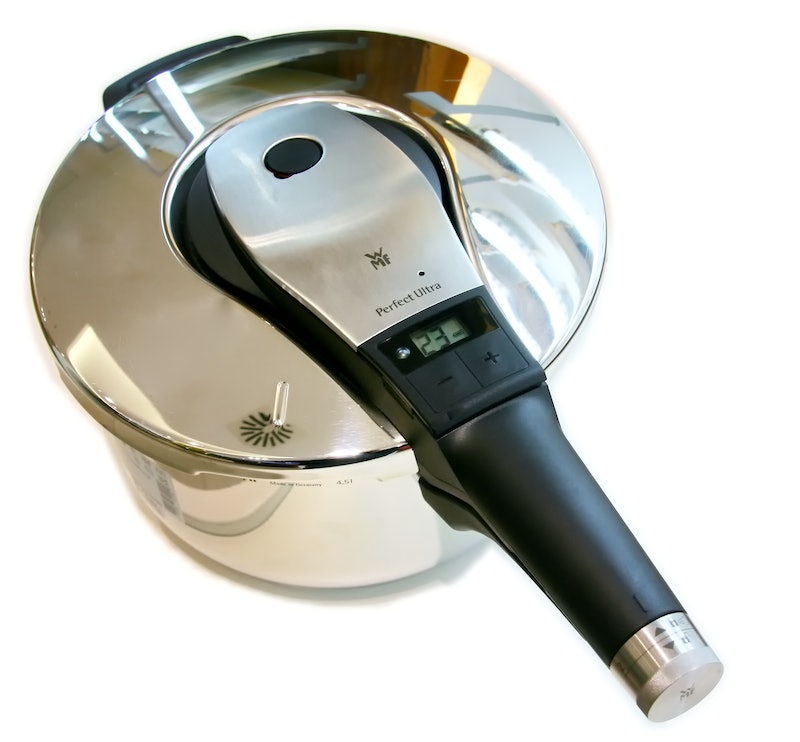 A New Yorker who Googled "pressure cooker" and "backpack" at work got a surprise home visit by six police officers Wednesday, who demanded to know if the man had any bombs, where his parents were from, and if their rice cooker could be used to make a bomb. And, they added, what the hell was quinoa?

(Pressure cookers were the alleged weapon of choice for the Boston Marathon bombers, and, on the day of the attack, were apparently carried in large backpacks.)

The man's wife, writer Michele Catalano, relayed their experience on a "Medium" blog that went viral this week. Catalano, a fan of grainy superfood quinoa, had been researching different kinds of cookers for it. Her husband had been conducting eeb searches to find a new backpack. On Wednesday morning, six armed investigators showed up at their home and began questioning Catalano's husband.

Meanwhile, they were peppering my husband with questions. Where is he from? Where are his parents from? They asked about me, where was I, where do I work, where do my parents live. Do you have any bombs, they asked. Do you own a pressure cooker? My husband said no, but we have a rice cooker. Can you make a bomb with that? My husband said no, my wife uses it to make quinoa. What the hell is quinoa, they asked...

By this point they had realized they were not dealing with terrorists. They asked my husband about his work, his visits to South Korea and China. The tone was conversational.

Catalano was shaken, and believed the experience to be the fault of the Google searches on the family computer — her son had Googled the Boston bombings, and, her blog suggested, perhaps even how to make a bomb. The FBI denied that this was the case, and, later, the Suffolk County Police Department revealed that they'd been tipped off by Catalano's husband's employer.

According to police, Catalano's husband had Googled "pressure cooker bombs" alongside "backpacks" on the work computer, and his employer had contacted officers. To which some of us say:

More like this
Kate Middleton & Prince William Were Booed & Mocked On Their U.S. Visit
By Jake Viswanath
Read Dan Levy's Heartbreaking Message After The Club Q Shooting
By Stephanie Topacio Long
These Are The Murder Suspects You Didn't See In 'The Texas Killing Fields' Doc
By Grace Wehniainen
Casey Anthony Revisits Abuse Allegations Against Her Brother In Her New Docuseries
By Grace Wehniainen
Get Even More From Bustle — Sign Up For The Newsletter