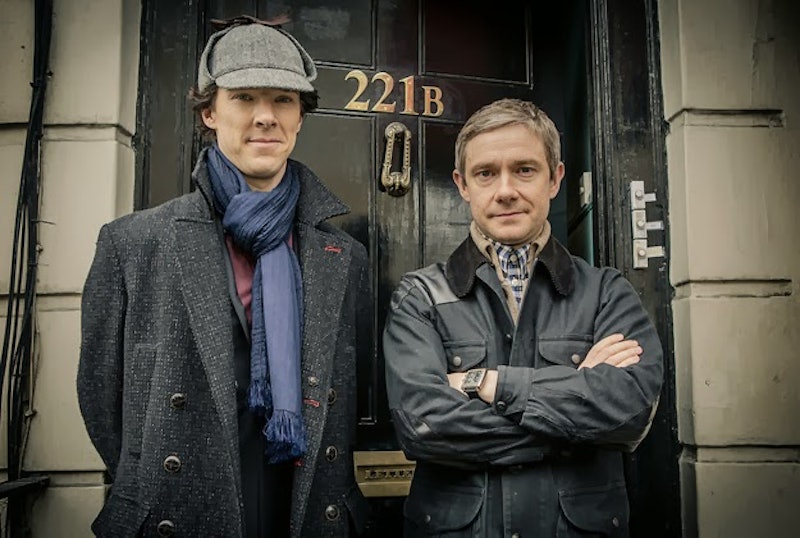 Sherlock fans (aka everyone in the universe), REJOICE! According to Watson himself, Sherlock will be returning to our screens for a sexy sleuthy Christmas special! But don't grab your Christmas crackers just yet, IT'S NOT COMING UNTIL 2015. In an interview with The Telegraph , Martin Freeman commented, "If [there]’s going to be a special - I’m speaking off-message here... I think that might be for next Christmas. A Christmas special. That’s what I understand,” Ohhhh even in interviews, the cast of Sherlock has to keep us on the edge of our seats. nevertheless, it's exciting news that filming in early 2015 is "likely." At the very least we'll have oodles of new behind-the-scenes set pics of Benedict Cumberbatch to make new memes out of come 2015.

In the interview, Freeman also gave us a few spoilers about the future storylines. When asked about whether his on-screen wife Mary (played deliciously by Amanda Abbington who is also Freeman's actual wife) would be returning for Season 4, Marin responded,

Certainly, yes, for the foreseeable future...“While we play fast and loose with the original stories, we generally follow the trajectory of what Conan Doyle did. So he [Watson] gets married, and then Mary dies - so at some point presumably she’ll die,” Freeman said.

So if you're not an avid fan of Sir Arthur Conan Doyle's work, you just had a major bomb dropped on you! But let's not look too far into a possible bleak future. Rather, let's revel in the upcoming Sherlock Christmas special merriment. Here are all of the things we just need to know:

Exactly how many silly sweaters will Martin Freeman wear?

We know it's going to be a lot, but still.

Will there be a song and dance number?

Please OH PLEASE have a little tap dance for us, won't you, BBC?

Is the safety of Santa going to be compromised?

I feel like Mycroft is in the know with the North Pole.

Just think of Mrs. Hudson as Cindy Lou Who.

Will Sherlock's Mind Palace be decorated for the season?

You know, a few nice garlands next to all of those murders.

Will Sherlock compose a Christmas song on the violin for Mrs. Hudson?

Because he really should.

Just how many gender roles will Mary destroy?

You know Watson is going to do all of the baking and wear a frilly apron and we couldn't be any happier about it.

Will Sherlock bait and switch Watson with his Christmas gift?

Watson will get Sherlock something really thoughtful, then Sherlock will make Watson think he hasn't gotten him anything...then blow him away with the best gift ever. OH YOU TWO.

More like this
'A League Of Their Own' Star Abbi Jacobson Is Engaged To Jodi Balfour
By Jake Viswanath
Lisa Kudrow Explained How Her Body Image Changed While Filming 'Friends'
By Grace Wehniainen
Miranda Cosgrove Reacts To Jennette McCurdy’s Shocking ‘iCarly’ Revelations
By Grace Wehniainen
Every Horror Movie Reference In The 'PLL: Original Sin' Premiere
By Alyssa Lapid
Get Even More From Bustle — Sign Up For The Newsletter