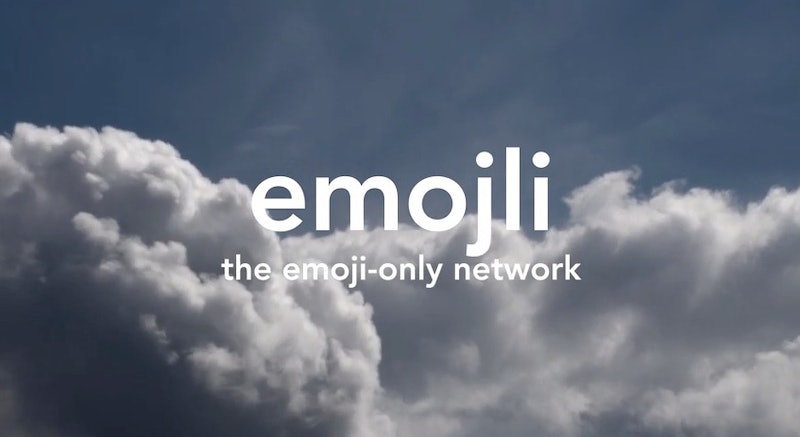 If complete text messages are too much for you, but Yo is too little, don’t worry — help is on the way. In an attempt to locate that happy medium between too much message content and too little, two creative souls have gone and created Emojli, an emoji-only messaging app. It “launches soon” on iOS, and is basically exactly what it purports to be: A middle ground between traditional social media communications, which are often cumbersome and unwieldy, and Yo, which literally only lets you text the same word over and over again.

“Social networks are broken,” the narrator intonates ominously in the company’s introductor video. “With spam, trolls, memes, and hashtags. It’s time for something simpler.”

And Emojli is nothing if not simple. Messages sent through the app consist only of emojis. The same goes for usernames, and while that sounds like it could get confusing, its creators claim there are 250,000 possible combinations for two-emoji usernames, so things won’t get too perplexing until more than 250,000 people sign up, which may or may not ever happen.

Initially, Emojli will only be a chat app, but its creators eventually hope to expand it into a full-fledged social network. What that social network would or could look like is completely beyond the capacity of our imaginations.

“We know what you’re thinking: This is satire. No one would actually make this thing,” the narrator says, correctly, in the intro video. “It’s not, and we have.” According to the company’s Twitter feed, 10,000 usernames have already been reserved.

So, there you have it. Now somebody just needs to create a Facebook spinoff app that only lets you communicate in likes.