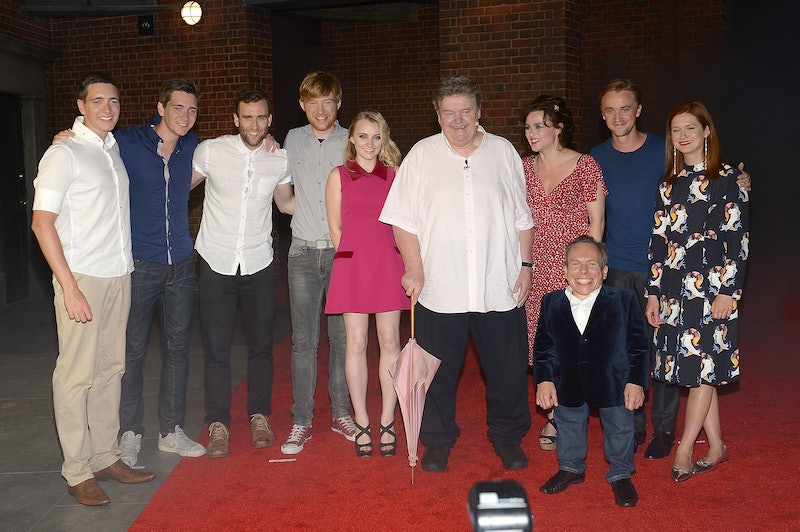 What's better than a theme park based on J.K. Rowling's iconic book and film series about The Boy Who Lived? When the films' actors come back and film footage for said theme park — and when that theme park is Universal Studios Orlando's The Wizarding World of Harry Potter 's Diagon Alley, opening on July 8. On Wednesday night, NBC aired The Making of Diagon Alley , ahead of the park's opening, and Potter fans learned something even more important than what awaits in Gringotts. Apparently, Harry Potter stars Rupert Grint, Ralph Fiennes, and even Bellatrix Lestrange herself, Helena Bonham Carter love Potter more than you do and they proved it.

The hour-long Potter event on NBC opened with a song that any good Potterhead knows by heart ("Hedwig's Theme") and then jumped right into the impressive work done on Diagon Alley to maintain the integrity of J.K. Rowling's magical world. In case fans didn't realize it, eight films later, Universal cares an exceptional amount about being true to Harry Potter. But anyway, the most striking part of The Making of Diagon Alley wasn't the ride on the Hogwarts Express, but the fact that the three aforementioned actors, along with Robbie Coltrane and James and Oliver Phelps, got back into costume for the theme park. Once a wizard, always a wizard.

For interactive, digital portions of the Hogwarts Express and Escape From Gringotts attractions, the Potter stars picked up their wands (nearly three years after Deathly Hallows Part II premiered) and filmed special footage for the park. I'm sure you understand the magnitude of this situation — mostly the fact that much like the global Potterverse, the film adaptations' biggest stars never said goodbye to The Boy Who Lived either.

Fans already knew that Evanna Lynch, Tom Felton, and a handful of other Potter stars attended Diagon Alley's grand opening, but this little fun fact about the park is something completely new for most of us. And it's something completely wonderful for fans, like myself, that will never let Potter go — at least we're not alone.