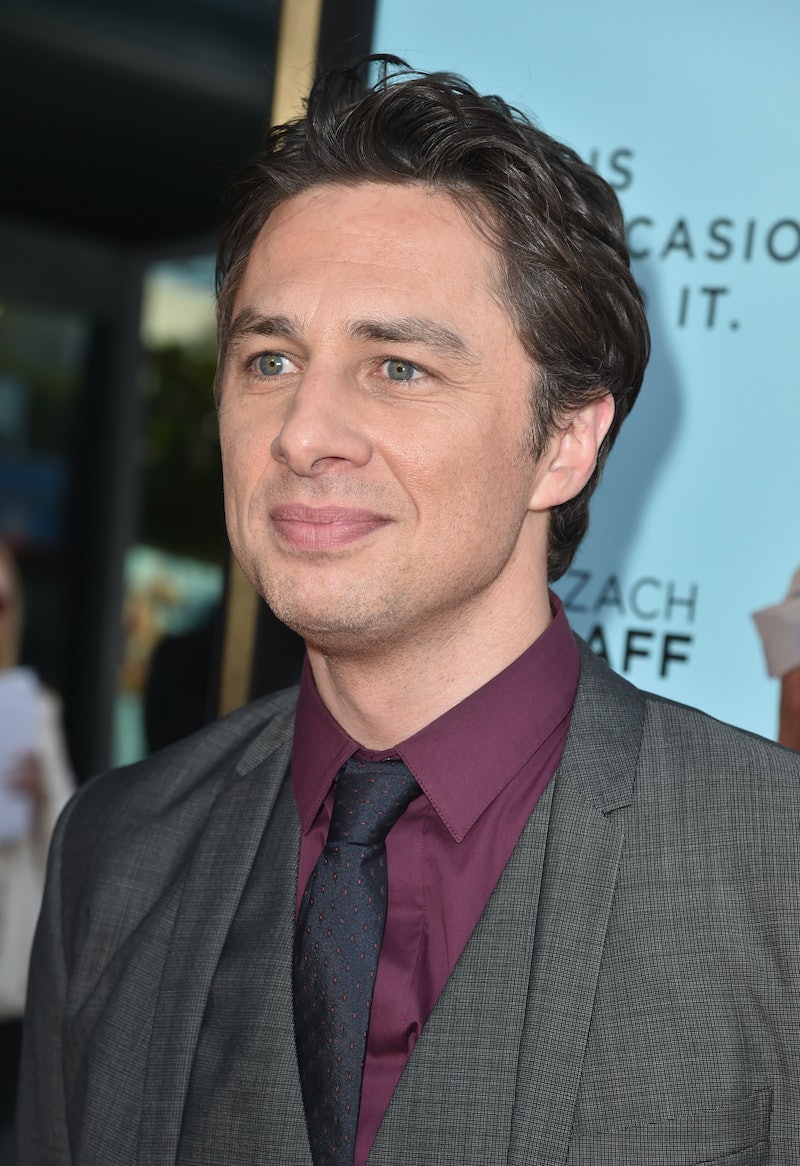 Before the massive success of the Veronica Mars movie Kickstarter campaign, crowd-funding for celebrity-driven pictures was unheard of. Why would a fan spend their own hard-earned money on the projects of Hollywood bigwigs? Well, because they are just that: fans. If you want something enough — like the movie version of your favorite TV show — and if you're willing to offer up a few bucks, it shows actors, producers, production companies, and distributers that what you want will make them money. Such was the case for Zach Braff's sophomore directorial debut, Wish I Was Here , about a 35-year-old man (Braff) who finds himself at a major crossroads when everything seemingly important in his life starts to crumble.

Bustle spoke with Zach Braff about crowd-funding and the difficulties of producing the film.

"You can't get a film like this made, period. It's very, very, very hard, and that's coming from someone who's only film I made so far was a big hit," Braff said, referencing his 2004 directorial debut Garden State. "I thought it would be a crazy idea to try this crowd-funding concept. If I was able to raise 2 million dollars in a month, I could contribute my own money, maybe I could get us to a budget that would allow us to shoot in LA. I decided to gamble on myself," he said.

Zach Braff's Kickstarter campaign aimed to raise $2 million in a month, but it managed to surpass that goal in the first 48 hours. Braff recognizes the momentum of his success may have been prompted by The Veronica Mars movie's success, which came just before his own campaign.

Kickstarter has also succeeded in educating the general populous that films like Braff's Wish I Was Here are not created easily. "The audience should know there's a reason they're not seeing more movies they like. I think John Q, movie lover, has no idea why more films he or she would like to see aren't being made," Braff admits. "No one's paying for them anymore. These small, personal films where the director wants to retain final cut of his or her story, no one will say yes to that without force feeding a cast."

The film, which boasts a killer cast — Almost Famous' Kate Hudson, Frozen's Josh Gad, Mandy "You killed my father prepare to die" Patinkin, Fargo's Joey King, The Big Bang Theory's Jim Parson — was made possible because the film was set in L.A. Day players like Parsons and Braff's real life BFF Donald Faison were able to be apart of the film thanks to its L.A. location. While it seems like an easy decision — make a film where actors live and save money on transportation and sets — surprisingly, it's the opposite.

"John Q movie lover doesn't know that you can't make a movie in L.A. anymore," Braff said. "If you're budget is dependent on 30 percent [tax rebate] by going somewhere else, no one is going to turn that down. But because I was the CEO of my own corporation, I was able to say, wait a minute, there's a macro decision to be made."

By staying in Los Angeles, not only did Braff get the best day players, he also hired the best crew "who because they're here and they'll take less pay if they can tuck their kids in at night." He also hired one of the best costume designers, Betsy Heimann (Pulp Fiction, Jerry Maguire), to work on the picture.

"L.A. is a character in the film because for me it is where my struggles for going after my dream took place, so that's where I wanted the film to take place. We tried to show all the different sides of L.A. from the deep valley to a cliff in Malibu."

Wish I Was Here hits theaters on July 18.