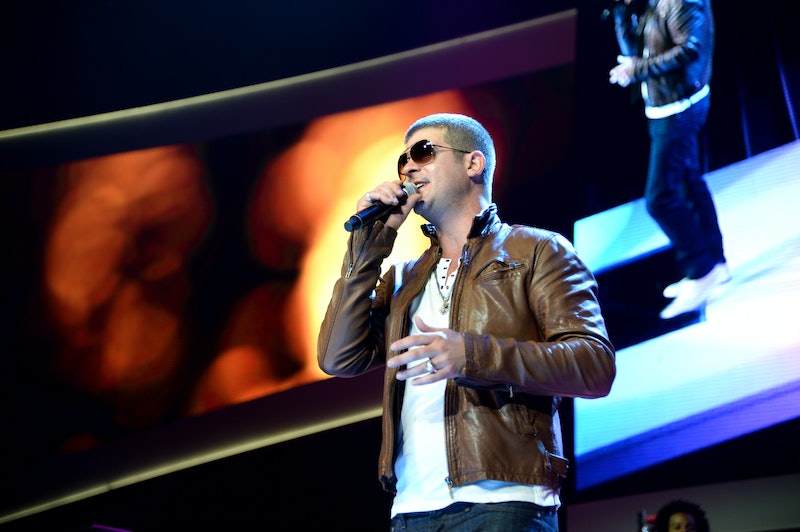 Now that Robin Thicke's Paula album is finally out, the press tour can begin in earnest. If you, like me, felt all of his teary-eyed performances of the songs were more than enough promotion for the album that everyone's talking about in a largely negative way, then prepare to be proven wrong. Thicke did an interview with Hot 97's Ebro in the Morning show during which he opened up about his relationship with Paula Patton and the real question here is, well, when did he stop opening up about it? In fact, could he stop opening up about it? Please? For her sake?

The most ironic thing about Thicke's interview with Hot 97 is that he couldn't seem to go five minutes without saying something that made you want to snort in disbelief. I mean, it's just bizarre to hear Thicke talk about privacy and selfishness when it's generally agreed that his entire Paula album is a selfish vanity project for him. Somehow, that fact never came up during the interview. All in all, Thicke's interview raised a lot more questions about himself and his relationship with Paula Patton than it actually answered. Here are just a few of the ones that we had.

Last year? But Paula wasn't out last year! "Blurred Lines" was more full of yourself than greedy and selfish, don't you think?

"At this point in our relationship, the only reason we’re not together is because of the choices I made."

By choices, you mean "Blurred Lines", right? If Paula doesn't work on Paula Patton, will you be issuing an album-long apology to the rest of us women who had to listen to it?

"She hasn’t heard [the album]. She’s only heard a few songs."

I thought you had written this entire album for her. Are you planning on setting up a boom box outside of her house playing the songs on repeat for your — I mean, for her benefit?

"I can’t speak for her, but I think space is an important part of any healing process."

Exactly what part of your promotional tour for Paula is considered giving her space?

“I try to keep most of that private, but I haven’t seen her for four months."

"I also want to wish her well and let her know that she’s a great person and she deserves to have a good life."

In that case, shouldn't you have named your album I Respect Your Decision to Need Space From Me, But You're Still My Muse So With Your Permission Let's Share The Profits From This Album 50/50 and Call It a Day, Paula instead?

“Maybe we’ll become our own people without each other and then it will be meant to be."

Is that really likely? Because your own person, so far, appears to be an obsessive and weepy opportunist who has no issue turning his private life into a public spectacle rather than respecting his ex-wife's desire for space and privacy. If that's who you are without Paula Patton, can you really be sure you're what's best for her?

"This album is dedicated to her, but half of it is about my problems and me [becoming] the kind of man that I wanted to be."

I've changed my mind. If this is the case, shouldn't you have called your album Robin instead of Paula? That would have solved almost everything, you know.

Listen to the entire interview below.