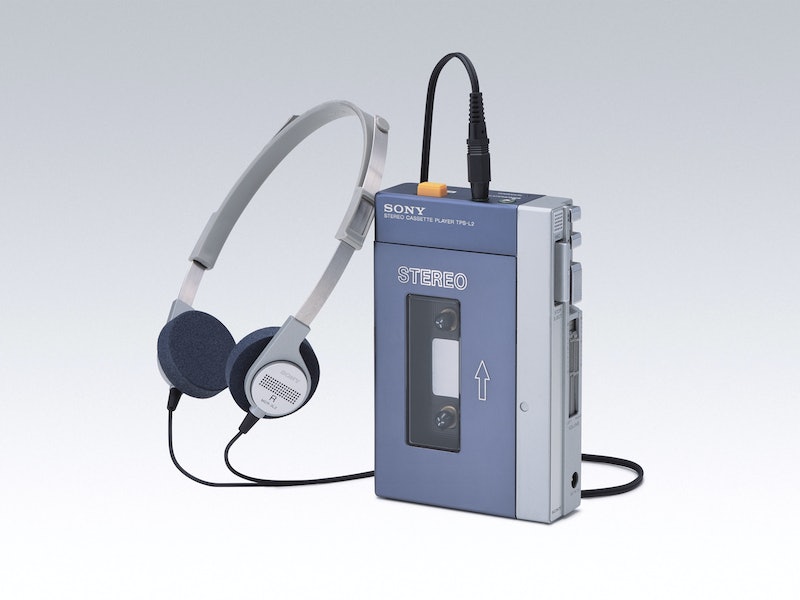 Sometimes, it feels like everything in the world is meant to make you feel old. Tuesday's big anniversary is a prime example — the Sony Walkman just turned 35 years old. Seriously? Once the mainstay of the portable music market, and still an iconic brand with a nostalgic, retro appeal, Walkman has seen more than its fair share of changes over those three-and-a-half decades, evolving from a simple cassette player, to a CD player, into the high-end digital audio mobile devices the line features today. (We know, we know — you stopped paying attention when you got your iPod.)

If your memory reaches back far enough — at least back as far as the late-80s to early-90s — you'll surely remember seeing someone walking around, headphones over the ears (ah, those pre-earbud days), with their trusty Walkman spinning away. Whether listening to your tried-and-true cassette collection, turning into the news, or maybe a baseball game on a languid summer afternoon, the mass popularity of Sony's revolutionary device was matched by its durable, understated, get-the-job-done charm.

And while its most dizzying highs may already have come and gone, it never hurts to take a fond look back at an old friend. Here are four vital steps in the Walkman's evolution...

In June of 1979, Sony made history with the commercial release (initially in Japan only) of the Walkman TPS-L2. It masterfully seized upon a virtually empty market, in being the world's foremost portable stereo system at an unprecedentedly low price — it launched at ¥33,000 when it hit the shelves in Japan, and $200 when it came to the U.S. a year later, in July 1980.

The TPS-L2 would set the quality standard for what Walkman owners would grow to expect in the coming years. It also included a quickly-scrapped early design feature, the bright-orange hotline button. With two headphone jacks allowing friends to listen-in simultaneously, pressing the hotline button allowed one listener to cut into the audio and speak to the other, all without pulling off the headphones. It did not have a radio built-in, however — that would have to wait a few years.

The best-selling model of the Walkman cassette players, the WM-2 moved into more modern, sleek avenues of design, and did away with the aforementioned, unusual hotline button. Unlike its predecessor, you could buy the WM-2 in different colors — even in the era of the iPhone, a perk you had to wait a while for.

While this is a very early model, and still lacked the radio tuner which would dramatically expand the Walkman's potential, it was a true hit with consumers, and frankly, it's what we envision when we think of Walkman.

We don't typically think of the 80s as being the origin decade of the compact disc, as the proper boom of the technology wasn't truly in full swing until the 90s. But indeed, the first audio CDs were available all the way back in 1982, and in 1984, Sony jumped on the fledgling technology with the release of the Discman D-50, a clunky block of a player which let people listen to their favorite music in the crisp tones of the CD, a far higher-quality format than the cassette tape.

Of course, skipping was always an issue for early CD players, so how much fun you could have jogging while lugging this thing around is anybody's guess.

In the years since its release, with the age of the CD having already peaked and fallen, the Discman name has been done away with, replaced with the highly-recognizable Walkman moniker.

Faced with the daunting (really, the impossible) prospects of competing in the portable music market with smartphones, oozing with multi-purpose functions that a strictly MP3 player couldn't match, Sony finally decided to move their audio classic into the mobile phone era in 2005, launching the Sony Erickson W800, which bore the Walkman brand.

It was a necessary move for Sony, that much is undeniable. And despite getting into the game a bit later than their competitors, there are now Walkman smartphones on offer, running Android just like so many others. It makes us feel a real sense of appreciation for the scope of the Walkman's history — from a visionary-yet-rudimentary cassette player, all the way to a phone.

Sony hasn't given up on the audiophile market entirely — in January 2014, Sony released the Walkman NWZ-ZX1 in Japan, and rolled it out in the UK months later. It's the very definition of a high-end music player, clocking in at a price tag of over $900. It's said to provide striking, crystal-clear high-res audio (and it better, at such a the lofty sum), but sadly, it's not yet available for purchase in the United States.