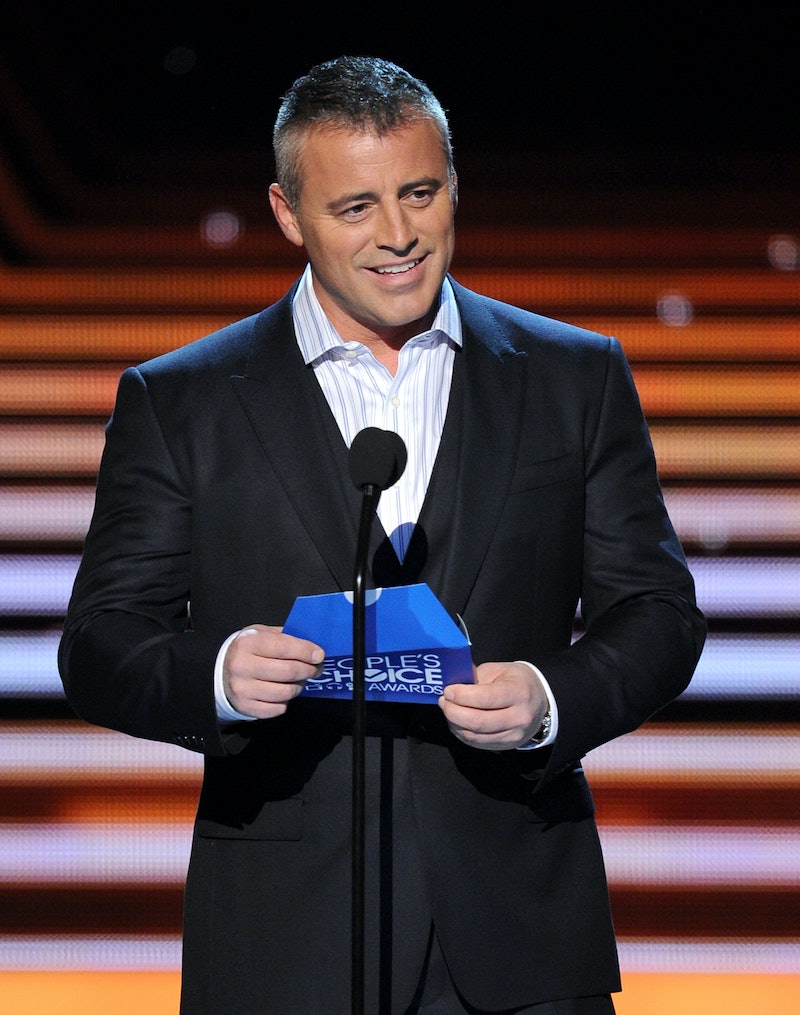 Here's something of a surprise: out of all the former Friends, Matt LeBlanc might just have had the most successful post-show career. Sure, Jennifer Aniston's a superstar, and Courtney Cox is on Cougar Town, but LeBlanc has Episodes, a critically acclaimed, fan-loved show that's earned him two Emmy nominations and a Golden Globe. It's the type of career the actor's Friends' alter ego would've dreamed of — but, as it turns out, when it comes to which Friends character more fits his personality, LeBlanc is actually more of a Chandler than a Joey.

Prompted by Entertainment Tonight, LeBlanc took the Buzzfeed "What Friends Character Are You?" quiz, and the results were not what he was expecting. His answers — "blue" as a favorite color, "summer" as the best season, "flying" as an ideal superpower — turned out to be more in line with the character of Chandler, played by Matthew Perry, than LeBlanc's own Joey. The actor was shocked (as well as very relieved he didn't get Rachel), and at first, so were we; how could the guy who played Joey for 10 years on TV not be at least a little similar to his character?

Yet the more we thought about it, the more the results didn't seem so crazy. Six reasons why LeBlanc as Chandler makes sense:

1. He Stars on Episodes

Episodes, for which LeBlanc is likely to receive a third Emmy nomination next week, stars the actor as a fictionalized, exaggerated version of himself. Plenty of actors would be afraid to take on a role that portrays them as arrogant, charming, and narcissistic, but not LeBlanc — which makes him just as self-aware and self-deprecating as Chandler Bing. One could easily imagine the witty, insecure Friends character taking an opportunity to make fun of himself, especially on a comedy; finally, someone's willing to listen to his jokes!

LeBlanc may have a hit TV show now, but before Episodes, there was Joey, the short-lived, much-maligned Friends spinoff starring the actor as his famous character. Much of the series revolved around Joey's relationships with his family, especially his large collection of sisters — something that all Friends fans know Chandler would approve of wholeheartedly.

3. He Cares About Horses

In the Entertainment Tonight interview, LeBlanc and the reporter met at a horse rescue ranch in L.A., a place the actor called a "great facility" that's dedicated to "saving these animals' lives." Now, Chandler:

4. He Loves a Good Denim Outfit

In the interview, LeBlanc sports head-to-toe denim, something Chandler has done on Friends on multiple occasions. To be fair, LeBlanc's outfit, a light shirt over dark jeans, is much trendier than the TV character's.

5. And He Wears Too Many Clothes

Sure, LeBlanc's denim outfit might look good, but on a horse ranch? In the summer? That's gotta be uncomfortable, and it's a Chandler move if we ever saw one.

6. But More Than Anything, He Cares About His Friends

Joey certainly loved his friends, but Chandler was the most committed to keeping their group together. As for LeBlanc, he's kept in touch with his castmates, guest-starred on Lisa Kudrow's Web Therapy, and doesn't even want a Friends reunion because he's so happy with the happy way their group ended. Loyalty and a value on friendship? That's so Chandler, in the best way possible.