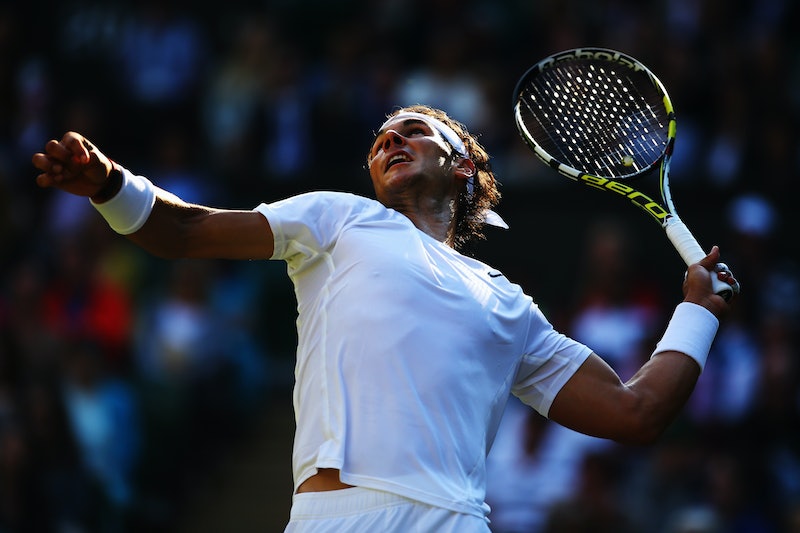 Oh, how the mighty have fallen. Wimbledon's produced some pretty big upsets in the last few days: On Tuesday, Serena Williams retired from the championships, and defending champ Andy Murray fell to Gregor Dimitrov Wednesday. But no victory has been as sweet, or as shocking, as the between-the-legs shot from 19-year-old Nick Kyrgios, knocking out the great Rafael Nadal.

The hit was so beautiful because it could have gone so, so wrong. The Australian teen met Nadal's powerful forehand with a seemingly nonplussed volley from between his legs. It takes some serious — pardon the pun — balls to meet arguably the world's best tennis player with any kind of funny business, and we'll count Kyrgios' "'tweener" as exactly that. The epic shot seemed to surprise even Kyrgios, who threw his arms up and started laughing, likely thanking whatever deity he celebrates that his gonads weren't compromised in the process.

Kyrgios was the wildcard going into the match, a no. 144 taking on world no. 1. BBC reported that even his mom didn't think he was going to win.

"I saw in an interview my mom said [Nadal] was too good," he said after the match. “That made me a little bit angry."

And if a little bit of mommy issues is what it took to take down the champion Spaniard, so be it.

Before the match, Nadal mused on the strength of fresh blood.

"Young players are very dangerous as always the young players have something special," Nadal told ESPN. "They are able to play with no pressure. They are fresh."

But I'm willing to bet that sentiment came from a "I'm a 14-time Grand Slam winner" place of security. There is no way that Nadal could have seen that coming, even if he recognized that his stakes were higher.He does have a point abut youth, though. With the upper echelon faltering in this championship, there has been a lot of talk about a proverbial changing of the guard in the tennis world. And remember, Nadal, it was just nine years ago that a certain 19-year old young 'un who knocked out Roger Federer. Talk about coming full circle, huh?