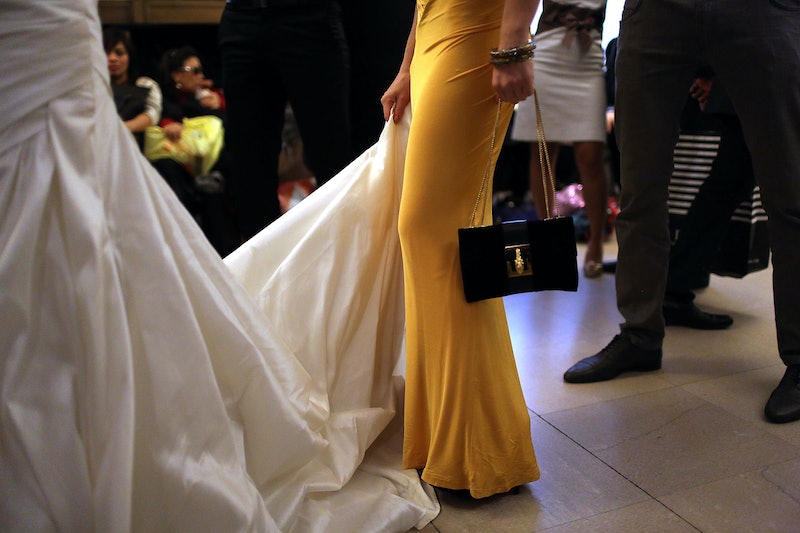 I come from a big family, so I like to think I know quite a few things about weddings — after all, I once had two cousins get married in the same month. But here's something even I had never heard of: a professional bridesmaid. 26-year-old Jen Glantz of New York is offering exactly this service, and advertising it on Craigslist, no less. Professional bridesmaid. What will these wacky millennials think of next?

Glantz is a copywriter and blogger who's done significant time in the bridesmaid trenches. But instead of sighing the old "always a bridesmaid, never a bride" complaint, she's decided she'd like to be a bridesmaid even more often by offering her services to complete strangers. As she points out, she definitely has the experience necessary for the job. She writes,

When all my friends started getting engaged - I decided to make new friends. So I did - but then they got engaged also and for what felt like the hundredth time, I was asked to be a bridesmaid.This year alone, i've [sic] been a bridesmaid 4 times. That's 4 different chiffon dresses, 4 different bachelorette parties filled with tequila shots and guys in thong underwear twerking way too close to my face, 4 different pre-wedding pep talks to the bride about how this is the happiest day of her life and marriage, probably, is just like riding a bike: a little shaky at first but then she'll get the hang of it.

I don't think that is actually what the phrase "like riding a bike" is supposed to mean, but whatever. At this rate it sounds like Glantz will get plenty of opportunities to use the phrase correctly when she serves once again as a bridesmaid at her friends' second weddings. Or at strangers' second weddings, now that she's turned professional.

Glantz's ad points out that there are lots of reasons a bride might want to bring on a professional bridesmaid, including:

-You don't have any other girlfriends except your third cousin, twice removed, who is often found sticking her tongue down an empty bottle of red wine.- Your fiance has an extra groomsmen and you're looking to even things out so your pictures don't look funny and there's not one single guy walking down the aisle by himself - You need someone to take control and make sure bridesmaid #4 buys her dress on time and doesn't show up 3 hours late the day of the wedding or paint her nails lime green.

As for her skills, Glantz writes she is "exceptionally good at" the following:

- Holding up the 18 layers of your dress so that you can pee with ease on your wedding day- Catching the bouquet and then following that moment up with my best Miss America-like "Omg, I can't believe this" speech.- Doing the electric and the cha cha slide.- Responding in a timely manner to pre-wedding email chains created by other bridesmaids and the Maid of Honor

There's no mention on the Criagslist ad of whether or not Glantz expects to be paid for her services, or whether she considers it payment enough to get to take over the dance floor and drink all your booze at the reception. Either way, though, I personally would find the idea of bringing on a stranger to be a bridesmaid really weird.

I mean, imagine a bachelorette party, drinking and swapping stories with a half dozen or so of your best friends — and that girl you found on Craigslist. Imagine that girl you found on Craigslist catching your bouquet, beating out your wedding-obsessed best friend. Imagine having to explain to your third cousin (who's pulled her tongue out of the wine bottle long enough to call you in tears) why you decided that instead of having her in your wedding you wanted some girl from Craigslist.

But hey, weddings are a big business, after all. I suppose it was only a matter of time before bridesmaids got in on the action.