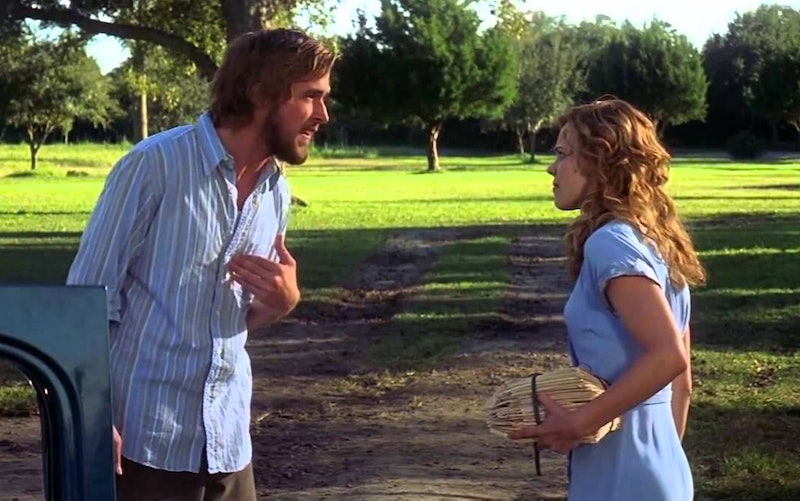 By this point in time, the stories surrounding the 2004 romantic film The Notebook are enough to carry their own lore: Director Nick Cassavetes hired Ryan Gosling because he "wasn't handsome" and "wasn't cool," and the film led to a very memorable romance between Gosling and co-star Rachel McAdams. But McAdams and Gosling weren't always the type who inspired SNL Digital Sketch lines about their love — in fact, for a good stretch of filming, Gosling and McAdams kind of hated each other.

Cassavetes opened up to VH1 about their on-set fighting, and it kind of made the film even better in retrospect? Here's what he recalled from filming:

Maybe I'm not supposed to tell this story, but they were really not getting along one day on set. Really not. And Ryan came to me, and there's 150 people standing in this big scene, and he says, "Nick come here." And he's doing a scene with Rachel and he says, "Would you take her out of here and bring in another actress to read off camera with me?" I said, "What?" He says, "I can't. I can't do it with her. I'm just not getting anything from this."

[...] We went into a room with a producer; they started screaming and yelling at each other. I walked out. At that point I was smoking cigarettes. I smoked a cigarette and everybody came out like, "All right let's do this.: And it got better after that, you know? They had it out. I think Ryan respected her for standing up for her character and Rachel was happy to get that out in the open. The rest of the film wasn't smooth sailing, but it was smoother sailing.

This is the kind of information that only serves to make people even more devoted to their real-life romance even years after it publicly ended. They hated each other, but then they loved each other! Like in Pride & Prejudice and You've Got Mail! Even When Harry Met Sally a little bit! Maybe he's her lobster! And they both look so good making out in the rain.

And just like the evidence of their chemistry was plain as day when they hooked up on the press tour and proceeded to date on-and-off for four years, it was also plain when it came to creating a romance film that's lasted in its iconicity. Noah and Allie fought a lot in The Notebook — but Gosling and Adams made them dynamic, exhilarating fights. Hearing about their real-life clashes they were having at the time kind of only adds to that.

Because they'd scream at each other in the movie, and then they'd do this:

And they'd have big, future-defining fights while standing really far apart from each other, but they filled every inch of that space with chemistry.

What their real-life relationship was or is is something we'll likely never have access to but at the end of the day, it's kiiiind of none of our business. But we're nosy, and do know some basics: They fought (a lot), and then they fell for each other. The fact that we could be talking about the characters or the actors here might be part of what made the movie a pretty memorable.