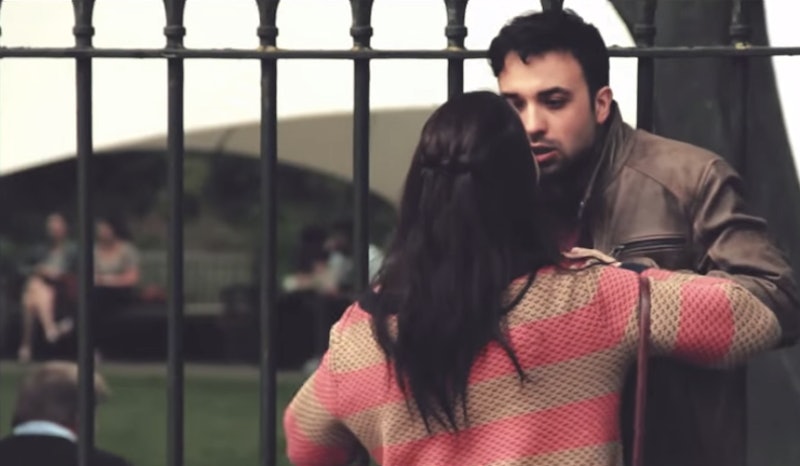 The Mankind Initiative on YouTube
By Stephanie Hayes
July 2, 2014

When a man hits a woman, people intervene. When a woman hits a man, people… laugh? Unearthed by Upworthy, a video from the Mankind Initiative called "Violence Is Violence" shows that to be the case. The campaign shows how witnesses reacted to two different versions of a very public couple’s dispute acted out in the UK.

In one version, the man gets physically aggressive with the woman. In the other, the woman attacks the man. Unbeknownst to passersby, the men and women were actors and this was part of the Violence is Violence initiaitive's campaign to raise awareness about violence against men. The public’s starkly different reactions to male versus female violence suggests we have some deeply ingrained ideas about who can really do harm.

In the video, when the man interrogates the woman, grabs at her, and pins her against a fence, three women rapidly intervene and threaten to call the police. One woman gives him a particularly stern talking-to, and a man who works in the area points to his office building and encourages the female victim to find him if she should need help later on.

When the situation is reversed and the woman repeatedly pushes her partner and yells at him, people simply gawk and giggle. Not a single person intervenes — passersby stop only to smirk. In fact, I half expected people to pull out tubs of popcorn and settle in to enjoy the show.

What do we learn from this? That women “don’t have to put up with [that]” because “he’s a wanker,” but that violence towards men is funny? Huh.

Yes, women are more likely to be the victims of violence at the hands of men than the inverse. Yes, men are often larger and stronger than women and therefore more able to physically harm women than the other way around. But men also make up a significant portion of rape, physical violence, and stalking victims. Although this particular video was filmed in the UK and uses UK statistics, a similar proportion of men in the United States are victims of violence. According to the Centers for Disease Control and Prevention, 1 in 4 women and 1 in 7 men in the U.S. have been stalked, raped, or the victims of physical violence by an intimate partner.

Now, I’m definitely not trying to downplay the significance of the violence and harassment that women experience. It is real and needs to stop. I simply want to draw attention to the fact that many men are victims too, and they deserve the same concern and assistance.