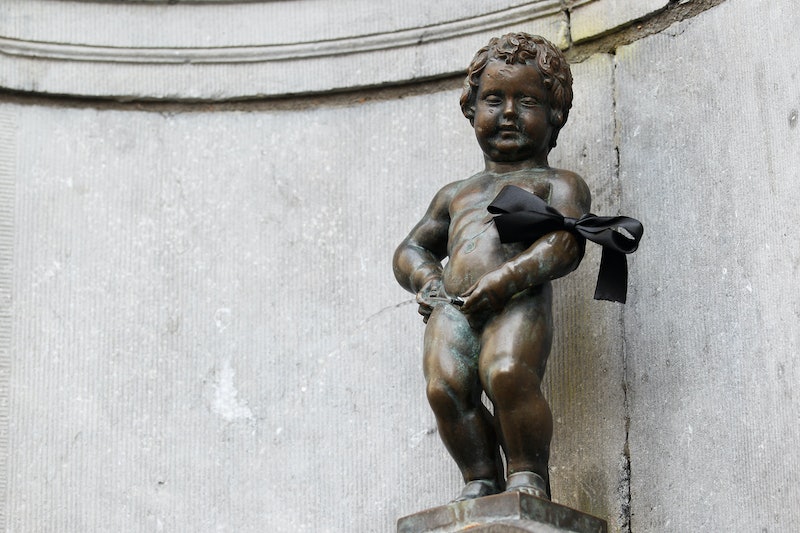 I'll be frank: This is really, really gross. I'm giving you your out right now. Okay, you seriously want to keep reading? Alright, then. There is, apparently, a new trend in Australian skate culture that involves men urinating into their own mouths. This new Australian trend is called bubbling, and it is entirely fake.

Yes, everyone, breathe a sigh of relief. And good luck getting that image out of your head for the next a few hours. The bad news is that people have done it. The good news is, it isn't the pervasive phenomenon that everybody seems to think it is.

The faux-trend has been reported by media inside and outside of Australia, and it's been described as "huge" and "viral." The whole thing stems from a photo of Fast Times skateboarder Callum Paul, erm, bubbling, at a Trash Talk show in Melbourne. VICE decided to dig into the issue, interviewing Australian skateboarder Troy Roberts a.k.a. Troy West a.k.a. Skategypsy about the bizarre phenomenon. This fueled the stream of media reports. (Stream. Geddit?)

VICE: How did bubbling first start? Just how big is it in Australia? Troy West: It's huge in Australia. It's part of our everyday life. My dad actually taught me how to do it when I was a kid.

And so you brought it to Europe? I was on tour in Austria, and this other skater, Frido, asked me if I would drink my own piss for $136. So I explained that it's common practice in Oz, and I did it right there and then, and then again later by some lake in Italy. It took Frido a few days to master the art, though—he had a weak flow.

Even after Paul's photo made the rounds on Reddit, it looked like bubbling still had the chance to die. Sure, there may have been isolated incidents, as noted by skater John Ryder, but it wasn't viral sensation we thought.

"Yeah, this doesn’t happen in Oz at all. Maybe one or two fruitcakes, but that’s it. I skate and live in Australia, and have never heard of ‘bubbling’," Ryder told news.com.au.

I guess someone should have told that to rugby player Todd Carney, who was caught bubbling in the bathroom of a bar. Unsurprisingly, he was cut loose from his $3 million dollar contract.

Mashable helped debunk the bubbling myth, talking to a handful of sources and ultimately determining that a few skateboarders were TROLOLOLOL-ing everybody. Paul's joke at the Trash Talk show was all a rouse which — thanks to Reddit and the Internet — totally worked.

Is there a deeper meaning behind it? It's a pretty big statement. Try it and find the meaning yourself.

Why do you think it’s so big in the skating community? Skaters like to provoke reactions from laymen, I guess.

Do people still tend to be shocked by this kind of stunt? Fucking oath. I'm in a pub in Bolivia right now and just had to explain to this legendary skater Al Partanen what "bubbling" is. He was polite about it, thinks it's fucked for sure, but I have no doubt he will try it by the end of the trip.

This is the same kind of moral panic Oprah caused with her rainbow party stir in 2005. What should we have learned from that, you ask? If it sounds completely ridiculous, it probably doesn't exist.