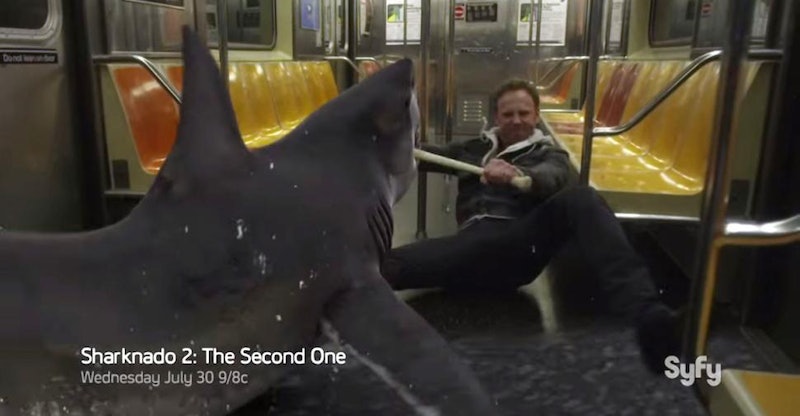 Do you want to see a clip from the most important sequel of the summer? Of course you do! Obviously I am talking about Sharknado 2: The Second One, which is set in good old New York City. In the new sneak peek the shark-filled tornado hits the NYC subway, much to the chagrin of Ian Ziering and Mark McGrath's characters.

The change in location of the sequel from Los Angeles to NYC makes total sense when you think about the number of disaster movies that take place in New York. It's about time it got hit by a tornado full of sharks. In all seriousness though, I have a big problem with this clip. It just doesn't seem that realistic. No, I'm not talking about sharks on the subway — as People points out, that has actually happened before.

I'm talking about the subway crowd's reaction to the crisis. Right before the shark tornado attacks, the lights in the subway shut off and everyone on board audibly gasps. In reality, when the lights turn off in the subway here's what happens: nothing.

New Yorkers are professional ignorers. They know how to disregard buskers, human feces on the subway steps, giant rats, and more. They're not phased by a little darkness — especially during rush hour, because outages and train stoppages happen way more than you'd think.

The only way this clip makes any sense is if everyone on board is a tourist. Then I'd buy these panicked, over-the-top reactions.